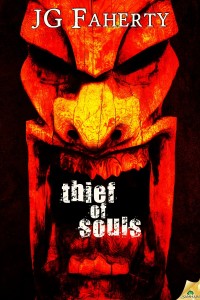 Perry didn’t want to be a thief. He simply needed to make back the money he lost on a bad business investment. Just three houses, then he can stop. But someone must be running a scam on him, trying to frighten him into turning himself in. He hears noises at night, small fires start in his house, and his dreams are filled with terrible nightmares.Soon Perry begins to fear it’s no mere scam—something unholy and inhuman is playing a game of cat and mouse with him. Perry has stolen an ancient idol…an idol that just might be haunted. Now someone – or something – wants to teach Perry a lesson, a lesson that will destroy everything and everyone that Perry loves.

“Reminiscent of the pulp classics from Weird Tales or Unknown Worlds, JG Faherty’s THIEF OF SOULS is a delightful reimagining of old-school horror. Fans of the genre will eat it up!”—Patrick Freivald, two-time Bram Stoker Award®-nominated author of SPECIAL DEAD and JADE SKY

THIEF OF SOULS is available from Amazon.

JG Faherty is a Bram Stoker Award® and ITW Thriller Award nominee and the author of five novels, seven novellas, and more than 50 short stories. He writes adult and YA horror/sci-fi/fantasy, and his works range from quiet, dark suspense to over-the-top comic gruesomeness. He enjoys urban exploring, photography, classic B-movies, good wine, and pumpkin beer. As a child, his favorite playground was a 17th-century cemetery, which many people feel explains a lot. His personal motto is “Photobombing people since 1979!” You can follow him at www.twitter.com/jgfaherty, www.facebook.com/jgfaherty, http://about.me/jgfaherty, andwww.jgfaherty.com.

A Beautiful Madness by Lee Thompson

Into the Devil's Underground by Stacy Green