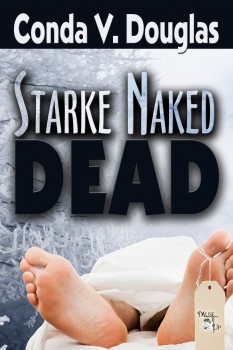 The gossiping women of the Widows Brigade in the new ski resort of Starke, Idaho love a good scandal—this time it’s a murder mystery, and a stark naked corpse!

Jeweler Dora Starke believes creating her own jewelry line with no money and no time is her biggest problem. She’s mistaken. When her recluse dad shows up and thrusts a stolen, cursed jewelry piece worth millions at her and demands she sell it or he’s dead, she knows this must be her biggest problem. She’s wrong. When she pursues her father to his Idaho mountain cabin and instead of dear old dad, discovers a stark naked corpse, she’s certain she’s found her biggest problem–whodunit. Nope. Dora’s problems are just beginning…Follow Dora as she becomes an amateur sleuth to solve the mysteries of cursed jewelry and murder, in this, the first of the Starke Dead women sleuth cozy mystery series.

STARKE NAKED DEAD is available from Amazon, iTunes and Smashwords.

Conda grew up in the ski resort of Sun Valley, Idaho. Her childhood was filled with authors and artists and other creative types. She grew up with goats in the kitchen, buffalo bones in the living room and rocks in the bathtub.Now her life is filled with her cat and dog and permanent boyfriend and writing.She’s traveled the world from Singapore to Russia (in winter!) and her own tiny office, writing all the while. She delights in writing her cozy Starke Dead creative woman mystery series with amateur detective jeweler Dora Starke. The more Dora discovers cursed jewelry, her aunt digging graves, and a rampant poisoner, the more fun Conda has–although sometimes Dora complains about her plight! Next up, Starke Raving Dead, in which Dora’s mad Aunt Maddie proves the aptness of her name.When she’s not writing Dora into her quirky and quixotic mysteries, Conda writes the popular tween fantasy Mall Fairies series. The fairy inspiration for her Mall Fairies came from the sparrows that live in the Boise Towne Square Mall in Boise, Idaho. When not rescuing fairies from humans, cats and themselves, Conda works on the last title in the Mall Fairy trilogy, The Mall Fairies: Destiny.