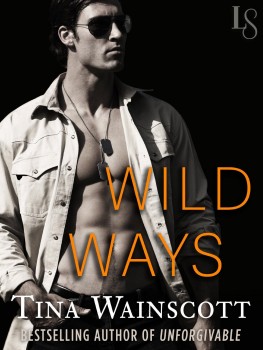 When her sister, Diana, rode off into the sunset with a member of the Kings of Chaos, Mollie was beyond worried. Two weeks later, a desperate call from Di launches Mollie into the dark world of violent outlaws. When a sexy SEAL comes to her rescue, he pushes his way into her search—and brings a team from the private “security” firm he works for. Julian Cuevas is living proof that some people can be counted on, even if her savior is a well-armed, world class sniper on a Harley. But Julian’s most lethal weapon, as far as Mollie is concerned, is the tough tenderness that threatens her heart.

WILD WAYS is available from Amazon, Barnes & Noble and iTunes.

Tina Wainscott has always loved the combination of suspenseful chills and romantic thrills. She’s published fifteen romantic suspense novels, as well as fourteen paranormal romances as Jaime Rush. Losing her nephew, a Marine, in the war made her realize that our military men are the perfect heroes. Not only during the war but afterward as they try to stitch their lives and souls together once they’re home. And so was born her new series about five Navy SEALs who take the fall for a covert mission gone wrong and join The Justiss Alliance, a private agency that exacts justice outside the law.As Jaime Rush, she is the author of the Hidden series, featuring humans with the essence of dragons, angels, and magic, and the award-winning Offspring series, about psychic abilities and government conspiracies.For contests, sneak peeks and more, visit www.TinaWainscott.com. For more on her paranormal romances, go to www.JaimeRush.com.