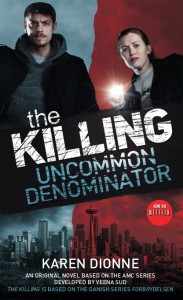 Fans of the AMC series The Killing will be thrilled to hear that Karen Dionne has written an original novel based on the critically acclaimed show. When firefighters respond to a suspected meth explosion at a trailer park, they discover a man’s body in a neighboring trailer, unburned but with terrible head wounds. The meth cooker lies in critical condition, and undercover narcotics officer Stephen Holder feels a kinship with the child the man leaves behind. Then another man’s body is discovered in a shipping container at the Port of Seattle, shot execution-style. For Homicide Detective Sarah Linden, two cases soon become one, and she must unravel a complex web of addiction, greed, and betrayal to reveal a killer.

Dionne’s riveting adaptation is sure to please The Killing’s many loyal fans, but it works just as well as a standalone if you’ve never watched a single episode. That should come as no surprise. Dionne’s skill as a storyteller and writer is well known. She’s the author of two incredible environmental thrillers (BOILING POINT and RT Book Reviews Best First Mystery nominee FREEZING POINT). And, among her many achievements, Dionne was previously the Managing Editor of THE BIG THRILL, helping build the magazine to what it is today. With THE KILLING: UNCOMMON DENOMINATOR, she’s once again receiving rave reviews. Aunt Agatha’s Bookstore, which doesn’t mince words, praised Dionne’s “smooth and meticulous story telling,” and called the book, “[a] terrific read . . . with good plot twists, red herrings, and heartbreaking details essential to any good noir.”

Dionne recently took some time to chat with THE BIG THRILL.

Could you talk about the “Point” novels? How did those come about?

I’ve always loved thrillers set in the real world that include a dash of science—Michael Crichton and Douglas Preston & Lincoln Child are early influences—so when I started writing, I naturally gravitated toward those kind of books.

BOILING POINT elevates two of the secondary characters from FREEZING POINT into major roles, and is about an erupting volcano, a missing researcher, and a radical scheme to end global warming involving geoengineering. I traveled to the Chaitén Volcano in Northern Patagonia, Chile, to research the book a year after the volcano erupted. The volcano was still on Red Alert, but my guide arranged lodging for me in Chaitén, even though the town was evacuated and without electricity and running water, and took me to within one mile of the new lava dome, where I saw steam vents, heard explosive noises coming from the caldera, and felt a small earthquake. It was an amazing and awe inspiring experience that really informed the book.

Berkley brought out both novels in mass-market paperback, and FREEZING POINT was also published in Germany and the Czech Republic. Both novels are currently available in electronic versions only.

How did you land the opportunity to write a novel based on the television show, The Killing? Wasn’t this version for AMC based on a show with the same title from Europe?

At the time, I hadn’t heard of The Killing because the show aired on AMC and I don’t get cable. I purchased the pilot episode from Amazon, and was immediately hooked. There are many elements that work in this show—the pacing, the writing, the actors, the moody atmosphere—but I think what grabbed me most was that the characters and the writing are so honest and real. I’ve since learned that many of my thriller author friends are fans—no doubt because they appreciate great writing.

My Titan editor read BOILING POINT, and on the strength of that novel, recommended that Fox hire me to write the book. And yes, The Killing is the U.S. version of the original Danish series Forbrydelsen. Interestingly, while I was working on my novel, my fellow thriller author and former ITW board member David Hewson was writing the novelization of the Danish version for the European market. We chatted at ThrillerFest one year about our books, and learned that neither of us had watched the other’s version of the show so we could stay focused on our own.

Do I understand the novel was cancelled and then reinstated at one point?

During the time I was working on the novel, the series was cancelled twice and brought back twice thanks to the show’s extremely loyal fan base. THE KILLING: UNCOMMON DENOMINATOR will publish in the U.S. on June 24 and on July 11 in the UK, and Netflix will bring out an exclusive fourth and final season beginning August 1.

How difficult was it to write already established characters and settings?

Recreating the show’s characters on the page was one of the most enjoyable aspects of writing this novel. I watched all of the episodes multiple times, and took extensive notes. I also watched the cast interviews on The Killing website, paying particular attention to how the actors described their characters. Fox sent me the scripts in advance of the episodes’ airing, which was fun, and being able to read the characters’ dialog and the stage directions was a great help. Fox also set me up with access to a private website where I could watch all of the episodes as needed. Occasionally I would freeze a scene on my computer screen, such as the interior of Detective Linden’s office, and then refer to that as I wrote the description for the book.

What are Backspace and the Salt Cay Writer’s Retreat?

Backspace is the online writers organization and discussion forum I cofounded in 2004. Backspace’s mission statement is “Writers Helping Writers,” and during that time, Backspace has grown to 2,100 members in a dozen countries. A third of the membership is agented and/or published, and includes many New York Times bestselling authors. Backspace members write in all genres, and are at all stages of their careers. Anyone is welcome to join as long as they’re serious about writing.

In addition to overseeing the discussion forums, my Backspace business partner and I organized the Backspace Writers Conferences in New York City for nine years. In 2013 we shifted our focus from a large conference that emphasized the business side of publishing, to an intimate weeklong writers retreat that focuses on craft. The second Salt Cay Writers Retreat will take place this October on a private island in the Bahamas. The retreat offers one-on-one time with #1 New York Times bestselling authors, editors, and agents, as well as group instruction and private writing time in a gorgeous and inspiring setting. There’s even a dolphin swim! Students who attended in 2013 tell us the experience was “life-changing,” and we’re thrilled to be able to offer such a unique opportunity to writers who want to up their game.

I’m currently working on a psychological thriller set in Michigan’s Upper Peninsula, where I lived for thirty years. I’ve always wanted to write a novel based on that experience, and I’m very excited to have found a story that will do the setting justice. I’m hoping the book will be ready to send to editors in the fall.

I’d like to encourage ITW members reading this article to get involved in the organization. And if you’re not a member and you’re a thriller author, you should definitely join! My experience as Managing Editor of THE BIG THRILL was so rewarding, as was my involvement with ITW’s Debut Authors Program, serving as a judge for the Thriller Awards, and my service on the board of directors as Vice President, Technology. I had fun, worked alongside some fantastic people and made connections that have helped my career, and through my volunteer service, was able to help shape the organization that is working so hard to elevate and support my genre—including designing THE BIG THRILL website. ITW wouldn’t exist without its willing and hardworking volunteers, and I promise if you step forward and get involved, you won’t regret it. 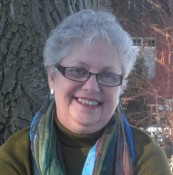 Karen Dionne is the internationally published author of BOILING POINT, an environmental thriller about an erupting volcano, a missing researcher, and a radical scheme to end global warming. Karen’s first science thriller, FREEZING POINT, was nominated by RT Book Reviews as Best First Mystery of 2008.

Karen is cofounder of the online writers community Backspace, and organizes the Salt Cay Writers Retreat held every year on a private island in the Bahamas. She is a member of Sisters in Crime and the International Thriller Writers, where she served on the board of directors as Vice President, Technology.

Karen has been honored by the Michigan Humanities Council as a Humanities Scholar for her body of work as an author, writer, and as co-founder of Backspace.

June 2 - 8: "Are thriller writers particularly pressured to write too fast?"