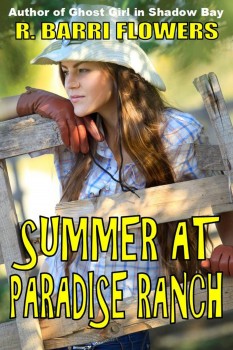 From R. Barri Flowers, author of the bestselling teen novels, COUNT DRACULA’S TEENAGE DAUGHTER, TEEN GHOST AT DEAD LAKE, and OUT FOR BLOOD, come the start of an exciting new young adult adventure series, SUMMER AT PARADISE RANCH.Four months shy of turning sixteen, Lexi Montoya was still trying to come to terms with her parents’ divorce and her mom’s remarriage to a man she met online, relocating to Maui, Hawaii.Choosing to remain with her dad in Seattle, Lexi had planned to spend her first summer since the divorce hanging out with her boyfriend, Matt, and best friend, Robin. But her dad had other plans, insisting she spend the summer visiting her mom and stepdad at his ranch called Paradise Ranch in Wailuku, in west Maui.Lexi went there with an attitude. Then she meets a cute Hawaiian guy named Mitsuo, is thrown into a love triangle, become friends with a teen girl living on a ranch next door, April; rides her first horse– an Arabian mare named Poppy– learns to hula dance and surf, and finds herself embroiled in a dangerous rescue mission when Poppy and another horse named Casper go missing from her stepfather’s ranch.By the time her tropical summer adventure comes to an end, Lexi hates to leave Maui and say goodbye to Mitsuo. But can she stay when Matt is waiting for her back at home to pick up where they left off? Or will he lose her to a summer romance?See book trailer.


SUMMER AT PARADISE RANCH is available from Amazon, Barnes & Noble and Smashwords.

OUT FOR BLOOD “as a part two is just as good as a stand alone and can be read out of order if needed. I would read book 1 first just to be completely engulfed in the magic and fantasy that this story line brings, To say this is not like anything I have read before would be a bit of a yarn , but I did like it very much!” — Cassandra M’s Place“The author weaves a story about a world where humans and vampires are trying to live in peace. The story surrounds Kula who might be young and slightly naive but isn’t weak.  She is a strong independent girl…. I found it do be a cute story and I’m sure teens and preteens will love it. I give this book 4 books.” — I Feel the Need, The Need To Read Blog on COUNT DRACULA’S TEENAGE DAUGHTER“This book has some serious potential with a really unique idea! The vampires are trying to peacefully coexist but there is a group of people that wants vampires to die their eternal death no matter how kind they are, just like in True Blood. The main character, Kula, is in love with a human. She thinks she is a human for the almost half of the book but their love is really tested after her sixteenth birthday. I think my students would really love this book.” — Brittany Elsen, Book Reviewer on COUNT DRACULA’S TEENAGE DAUGHTER“BEFORE HE KILLS AGAIN is a rocket of a read. Not only a heart-thumping thriller, this is that rare novel that is downright scary. Pick it up at your peril, because you won’t put it down until you’ve read the last word.” – John Lutz, Edgar winner and bestselling author of Twist“A masterful thriller set in the dark underbelly of Maui, with lots of fine action, down and dirty characters, and the vivid details of police procedure one would expect from an author who is also a top criminologist. A terrific read!” — Douglas Preston, co-creator of the bestselling Pendergast series of novels on MURDER IN MAUI.“An exquisitely rich and masterfully constructed mystery…. A savvy, smooth, and sumptuous read that’s as hot as Waikiki beach sand.” –Jon Land, bestselling author of Strong Vengeance on MURDER IN HONOLULU“It gets no better than this! R. Barri Flowers has written another thriller guaranteed to hold onto its readers! –Huntress Reviews on DARK STREETS OF WHITECHAPEL“A gripping and tightly woven tale you won’t want to put down. Author Flowers neatly contrasts the natural beauty of a tropical paradise with the ugliness of murder and its aftermath. ” — John Lutz, Edgar Winner and bestselling author of Pulse on MURDER IN MAUI“R. Barri Flowers writes with the passion and knowledge of someone who truly knows his craft. A steamy, non-stop thrill-ride through the seamy underbelly of Hawaii.” — Allison Leotta, former federal prosecutor and author of Discretion on MURDER IN MAUI“Flowers once again has written a page-turner legal thriller that begins with a bang and rapidly moves along to its final page.” — Midwest Book Review on STATE’S EVIDENCE“A model of crime fiction …. Flowers may be a new voice in modern mystery writing, but he is already one of its best voices.”–Statesman Journal on JUSTICE SERVED“An excellent look at the jurisprudence system…will appeal to fans of John Grisham and Linda Fairstein.” – Harriet Klausner on PERSUASIVE VIDENCE

R. Barri Flowers is the bestselling author of young adult novels, including OUT FOR BLOOD, COUNT DRACULA’S TEENAGE DAUGHTER, TEEN GHOST AT DEAD LAKE, GHOST GIRL IN SHADOW BAY, DANGER IN TIME, and CHRISTMAS WISHES: Laura’s Story. His novels can be found in print, eBook, and audio.The author has also written a number of bestselling teen and young adult related nonfiction books as well, including RUNAWAY KIDS AND TEENAGE PROSTITUTION, KIDS WHO COMMIT ADULT CRIMES, and CHILDREN AND CRIMINALITY.Follow R. Barri Flowers on Twitter, Facebook, Pinterest Goodreads, Google+, LinkedIn, YouTube, LibraryThing, and www.rbarriflowers.net. And learn more about the author in Wikipedia.

White Rabbit by K. A. Laity