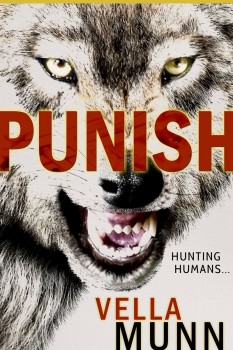 One afternoon, two uncaring brothers who own a rural puppy mill are attacked and killed by three massive grey dogs.Animal control officer Nate Chee hates what some people do to animals under their care. The brothers got what they deserved–not that he can tell anyone that and keep his job.

Teacher Rachelle Reams reaches out to her step-father, trying to reestablish a relationship with him. Joe and her mother divorced when she was young, leaving a hole in her heart. Joe has found a purpose in caring for the three greys he raised from puppies. They’re his world.

But will he ever see them again? What force drives them?

PUNISH is available from Amazon, Barnes & Noble and Kobo.

Three large grey dogs ruled by a force only they comprehend roam the county searching for animal abusers. When they find them, punishment is meted out with fangs and claws. For the two brothers and their sister, life is simple—they do what the Force tells them to.Life is much more complicated for the humans their existence impacts. Joe, a former POW, has loved the trio since they were helpless puppies. They make him feel part of something alive. His step-daughter Rachelle longs to connect with the only father she has ever known, but from the moment she sees the greys, she knows Joe has made a dangerous and deadly mistake by letting them run free. Even though he believes the victims got what they deserved, animal control officer Nate must do everything he can to stop the man-killers. Rachelle and Nate should have very different goals but life is never that simple.

Castle by the Sea by JG Faherty