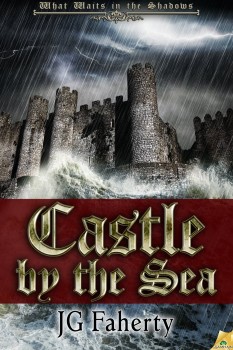 How did they get here? Will they ever get out?Jason and Erika are having a wonderful time at the Halloween carnival…until their swan boat in the Tunnel of Love capsizes amid heavy waves and blaring, maniacal laughter. When they come to they are no longer in a carnival in Ohio, but standing at the edge of a sea in a raging storm. In the distance, atop a high, barren hill, looms an enormous castle.Instead of answers, Jason and Erika find only more impossibilities within the stone walls. The lavish rooms are lit only by torches and fireplaces, the decorations and furniture are a century out of date, and the mysterious host claims to not own one of those newfangled telephone inventions. Outside, in the storm and the dense mist, lurk strange, threatening figures. Inside, another couple seeking refuge think it must all be a nightmare. Perhaps it is. Or perhaps it’s something much, much worse.

CASTLE BY THE SEA is available from Amazon and Samhain.

“I’ve known JG Faherty since he was an up-and-comer.  Now he’s arrived.  Start reading him now – as in TODAY – so you won’t have to play catch-up later.” – F. Paul Wilson, author of the bestselling Repairman Jack series.

JG Faherty is a Bram Stoker Award® and ITW Thriller Award nominee and the author of five novels, seven novellas, and more than 50 short stories. He writes adult and YA horror/sci-fi/fantasy, and his works range from quiet, dark suspense to over-the-top comic gruesomeness. He enjoys urban exploring, photography, classic B-movies, good wine, and pumpkin beer. As a child, his favorite playground was a 17th-century cemetery, which many people feel explains a lot. His personal motto is “Photobombing people since 1979!” You can follow him at www.twitter.com/jgfaherty, www.facebook.com/jgfaherty, http://about.me/jgfaherty, andwww.jgfaherty.com.