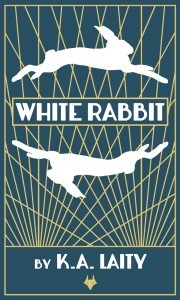 Sometimes the shadows that haunt us are what lead us back to the lightDisgraced former police detective James Draygo has sunk as low as his habit allows, working as a fake psychic despite his very real talents. When a media mogul’s trashy trophy wife gets gunned down at his tapping table he has to decide whether he can straighten up long enough to save his own skin. He may not have a choice with Essex’s loudest ghost bawling in his ear about cults, conspiracies and cut-rate drugs. Oblivion sounds better all the time…

Best Selling Crime Writer, Richard & Judy Summer Read Winner James Oswald on White Rabbit:‘Being a fan of mashing up genres myself, I was of course delighted to see someone else playing fast and loose with things. The central idea of the story – a real psychic pretending to be a fake – is delicious, too. The mystery was deftly played with just the right balance of action and character interplay to keep me turning the pages. The seedy side of London is nicely worked as well – not too threatening, as befits the style of book, but still gritty enough. The cast of supporting characters are nicely drawn, too. Kate writes with a fluid, easy to read style.’

Tony’s Thoughts (Goodreads):‘This book is crime noir, but not as you know it. Nothing in this book is as it first seems. It has more levels than Chuckie Egg. For example the main character is a fake psychic detective, except he isn’t either. There is also the mute assistant that comes across as a mute Lennie from Of Mice And Men but is a lot smarter than he seems. I got so engaged in this story that I deliberately got on a later and slower train yesterday so that I would have a longer reading session. I know.’

Author bio:K. A. Laity is the award-winning author of White Rabbit, A Cut-Throat Business, Lush Situation, Owl Stretching, Unquiet Dreams, À la Mort Subite, The Claddagh Icon, Chastity Flame, Pelzmantel and Other Medieval Tales of Magic and Unikirja, as well as editor of Weird Noir, Noir Carnival and the forthcoming Drag Noir. With cartoonist Elena Steier she created the occult detective comic Jane Quiet. Her bibliography is chock full of short stories, humor pieces, plays and essays, both scholarly and popular. She spent the 2011-2012 academic year in Galway, Ireland where she was a Fulbright Fellow in digital humanities at NUIG. Dr. Laity has written on popular culture and social media for Ms., The Spectator and BitchBuzz, and teaches medieval literature, film, gender studies, New Media and popular culture at the College of Saint Rose. She divides her time between upstate New York and Dundee.

Past Due by Jenna Bennett