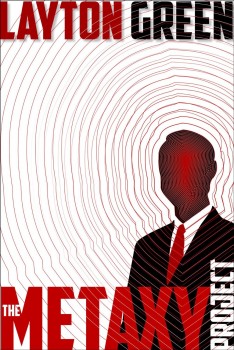 From the bestselling author of the Dominic Grey series comes a new novel that is part legal thriller, part psychological mystery, and 100% dark and riveting suspense . . .Rising above a hardscrabble childhood to become a star at one of Atlanta’s most prestigious law firms, Derek Miller is reliving The Great Gatsby in his own backyard.  The spell is broken, however, when Derek’s investigation into the death of his mentor, a prominent psychologist, runs afoul of a mysterious government project involving research into psychic phenomena.As Derek digs deeper, convinced his mentor was murdered, he is plunged into a rabbit hole of government experiments, clandestine figures, and supposed paranormal events.  His investigation also puts him at odds with shadowy forces deep within the corridors of power — including those on the top floor of his own law firm.With his career in shambles, a warrant out for his arrest, and his life in jeopardy, Derek is running out of time to unravel the secrets surrounding his mentor’s research.  And if he fails, it’s not just his own life that will be at risk, but the lives of those he holds most dear.From a theoretical physicist to a clairvoyant housewife to the charismatic pastor of a mega-church, from lavish Southern mansions to desperate urban wasteland, Derek’s investigation turns into a race for survival that hinges on one thing alone: finding, and stopping, the most powerful psychic the world has ever seen.

THE METAXY PROJECT is available from Amazon.

The Diabolist “[A] story that will move you to the edge of your seat.”—   Seattle Post-Intelligencer“Part international thriller, part philosophic treatise on good and evil, part intricate, unforgettable nightmare-inducing fever dream, THE DIABOLIST has everything you want from a thriller. Layton Green is a master of intellectual suspense. This one’s a killer.”—    JT Ellison, bestselling author of EDGE OF BLACK“The confines of a page are not enough for Layton Green’s writing. His work begs to be translated into 100-foot high IMAX images, rendered in 3D, and given a score by Hanz Zimmer”— Biblioteca“A well-crafted and exciting thriller with a pair of interesting protagonists . . . and a charismatic villain who makes our skin crawl.”— Booklist“A dark, intelligent, spellbinding novel . . . I cannot recommend this one highly enough.”—    Beauty in Ruins ReviewsThe Egyptian“Stirring and imaginative, with an engaging premise that is briskly paced.  Both the characters in the story and the reader are in for a wild ride.”–       Steve Berry, New York Times bestselling writer of The King’s Deception “Wow. Layton Green has become the new master of gripping, chilling, and suspenseful stories.”–       Two Readers Reviews “I do believe Layton Green has moved into my top 5 author category – not an easy feat to attain!”–       A Novel Source“Layton Green is an absolutely brilliant writer.”–       Everything To Do With BooksThe Summoner“The Summoner is one of those books that make you want to turn on all the lights in your house and lock the doors . . . The settings are authentic and you can feel and smell the countryside . . . This is a wonderful read for those who enjoy both suspense and action stories.”—       Seattle  Post-Intelligencer“Mystical, complicated, completely believable and terrifying . . . [w]ith an ending that will catapult you out of your reading chair.  Riveting.”—         The Review Broads“Favorite book of the year so far.”—         A Novel Source“An awesome read . . . harkens back to The Serpent and the Rainbow in its ability to convincingly portray seemingly paranormal events in a realistic (and therefore even creepier) manner.”—         Blood Writes, Mystery Pick of the Week

Layton is a mystery/suspense/thriller writer and the author of the bestselling Dominic Grey series, as well as other works of fiction. His novels have cracked the Amazon Top 50 in the United States, the United Kingdom, and Germany, and have topped numerous genre lists.In addition to writing, Layton attended law school in New Orleans and was a practicing attorney for the better part of a decade. He has also been an intern for the United Nations, an ESL teacher in Central America, a bartender in London, a seller of cheap knives on the streets of Brixton, a door to door phone book deliverer in Florida, and the list goes downhill from there.Layton lives with his wife and children in the Atlanta area. Please visit him on Facebook, Goodreads, Library Thing, or on his website at www.laytongreen.com.

Murder by Serpents: The Mystery Quilt by Barbara Graham