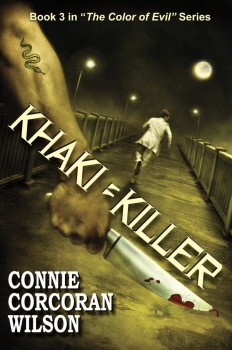 KHAKI = KILLER is the 3rd book in THE COLOR OF EVIL series, which won Pinnacle, E-Lit and Silver Feather awards. Book #2 was named a “Page-turner of 2013” by “Shelf Unbound” magazine and also earned praise for one of the best “indie” book covers of 2013..KHAKI = KILLER picks up where RED IS FOR RAGE (Book #2) left off, answering the question, “What happened to Melody (Harris) Carpenter?” Melody was involved in a cheerleading accident while cheering for the (Cedar Falls, IA) Sky High Eagles.  Rushed to the hospital with injuries suffered in a fall from atop the human pyramid, she is fighting for her life as KHAKI = KILLER opens.The budding romance between Janice (Kramer) and Stevie (Scranton) continues to grow more serious, but Janice’s parents oppose her relationship to the son of a murderer.  (There are more revelations about Earl Scranton’s motives for the Homecoming Night massacre.) Romance continues to heat up between Tad McGreevy and Jenny SanGiovanni, Charlie Chandler and Andrea SanGiovanni, and Belinda Chandler and Kenny Kellogg.When Heather Crompton and Kelly Carter mysteriously disapper while ice-skating on the Cedar River, tension in town ratchets to a fever pitch.  The entire town is involved in the search.  Retired police officer Charlie Chandler reorganizes the rag-tag team of investigators that helped find Stevie Scranton and bring him back to Cedar Falls in RED IS FOR RAGE. (Book #2)

In the background, constantly a menacing presence, lurks Michael Clay (aka, Pogo), an escaped serial killer who is still searching for Tad McGreevy, still hoping to permanently silence “the boy who sees the future” by reading the auras of others (Tetrachromatic Super Vision) and dreaming about their evil deeds.Tensions run high and the stakes run even higher in KHAKI = KILLER, Book #3 in THE COLOR OF EVIL series.

KHAKI = KILLER is available from Amazon.

“THE COLOR OF EVIL is old-school psychological horror, artfully blended with new-school shocks and twists…Bravo!” (Jonathan Maberry, New York Times Best-selling author, multiple Bram Stoker winner).“Connie Wilson is back—She’s good! She’s DAMN good!  In a world of mostly bad-to-fair writers, she stands above the crowd with plot, description, and strong characters.  Believe me, you’ll enjoy her latest! That’s a guarantee!  She’s a born storyteller!” – William F. Nolan, Living Legend in Dark Fantasy, “Logan’s Run,” “Logan’s World,” “Nightworlds.”“Wilson’s characters come alive on the page.  Comparisons to Stephen King, Dean Koontz and Philip K. Dick aside, Wilson has spent 33 years teaching students in this age range.  She knows what she is talking about.”  Gary Braver, author of “Flashback” and 8 other thrillers.“Connie Corcoran Wilson weaves a deftly fine scalpel in an age where a crude blade is more the norm.  Her work is a smooth, subtle, hybrid mix of science fiction, thriller, and horror, that realizes a unique and pointed vision in the great tradition of Philip K. Dick and Ray Bradbury.  Her voice is a wonder to behold, at once dark and somber while maintaining a glimmer of hope that shines in the hearts of her heroes, who cling to the light.  Like Stephen King, nothing escapes her discerning eye, the result of which is tale after tale that bleed life onto the page, both literally and figuratively.” Jon Land, Best-selling author of the Caitlin Strong series.“Wilson makes all this count and mixes the ugly and the good in ways that are rewarding for readers…There are moments of a real gift here, deft touches, especially between Stevie Scranton and his girlfriend that ar quite touching and even inspired.  I remain happy to follow this series.  I am assuming the series will reach a conclusion, and I cannot wait to see how Wilson writes it.” Andy Andrews, “True Review” magazine.“Connie Corcoran Wilson has become another favorite go-to storyteller.  THE COLOR OF EVIL and RED IS FOR RAGE are reminiscent of a Stephen King novel.  Mr. King has a knack for making the All-American small town a nest of unimaginable horror.  Well, Wilson also accomplishes that in her books.” Heather Beldon, “Saving for Six” blog.“If you’re looking for a book full of adventure and action, then this is the one for you.  I can say that Ms. Wilson did a wonderful job with Tad and his unique abilities, which we learned more about in RED IS FOR RAGE.  I also think that she knows her characters quite well.  She left me craving the next book (KHAKI = KILLER), which says something, especially since I tend to avoid these types of tales where there is so much darkness.  But I could see that little glimmer of hope, the little bits of light through the darkness and that left me wanting more…While her books deal with some sticky situations, she does it in such a classy manner that it will suck you into the world she has created.” CondyGirl, “Recent Reads” blog.

Connie (Corcoran) Wilson (MS + 30) graduated from the University of Iowa and Western Illinois University, with additional graduate study at Northern Illinois, the University of California at Berkeley, and the University of Chicago.  She has taught writing at 6 IA/IL colleges and has written for 5 newspapers and 11 blogs for pay, beginning at age 10.  Yahoo named her its 2008 Content Producer of the Year, where she covers politics and entertainment and has had over 1,000,000 “hits” for the past 5 years.Connie is a member of ITW (International Thriller Writer), where she is a writer for their online newsletter, and a member of IWPA (Illinois Women’s Press Association), which awarded her its Silver Feather Award for Writing in 2012 (June 6) and 2014 (May 17), AWP (American Writing Program), MWA (Midwest Writers’ Association) and MWC (Midwest Writing Center), which named her Writer of the Year in 2010 (March 30).  She has won numerous E-Lit awards, NABE Pinnacle awards, an ALMA (American Literary Merit Award) award, a LuckyCinda competition and front-runner status in recommendations in the YA category for THE COLOR OF EVIL in 2011.  Her stories and interviews with writers like David Morrell, Joe Hill, Kurt Vonnegut, Frederik Pohl, William F. Nolan, Anne Perry, r. Barry Flowers, Valerie Plame, Jon Land and Allen Zadoff have appeared online and in numerous journals.Her work has won prizes from “Writer’s Digest” (Screenplay), “Whim’s Place Flash Fiction,” the Berkeley Fiction Review, and she has 25 published books. Connie reviewed film and books for the Quad City Times (Davenport, IA) for 12 years, wrote humor columns and conducted celebrity interviews for the (Moline, Illinois) Dispatch, and maintains her own blog, www.WeeklyWilson.com, while also twittering (@Connie_C_Wilson), Connie Wilson Author.She was a presenter at the Spellbinders Conference in Honolulu, Hawaii (Labor Day, 2012) and has been a panelist at “Love Is Murder” in Chicago several times, most recently in February.She has 3 ongoing seris:  THE COLOR OF EVIL (novel); HELLFIRE & DAMNATION (short stories organized around the crimes and sins punished at each of the 9 Circles of Hell in Dante’s “Inferno”) and The Christmas Cats, an illustrated children’s series which she writes for and with her twin five-year-old granddaughters, Ava and Elise.  (www.TheColorOfEvil.com; www.RedIsforRage.com; www.KhakiEqualsKiller.com; www.HellfireAndDamnationTheBook.com;www.TheXmasCats.com). Her main author site is www.ConnieCWilson.com.Connie lives in East Moline, Illinois with her husband of 46 years, Craig, and their cat, Lucy.  Her son Scott and daughter-in-law Jessica and their twin daughters live in Chicago, where she also has a place. Daughter Stacey, born 19 years after her brother, graduated from Belmont University in Nashville, worked for Taylor Swift’s 13 Management, and is currently in training in Dallas to become a Southwest Airlines stewardess.  She likes cats, travel to warm places, music (plays 4 instruments), trivia, and writing.

The Metaxy Project by Layton Green