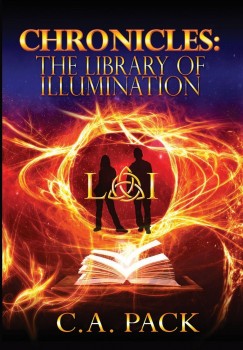 Within the walls of a centuries-old building lies the magical Library of Illumination where books literally come to life. What makes this library even more unusual are the two teenagers chosen to oversee its operation. Johanna Charette and Jackson Roth must use their wits to deal with the sometimes humorous, sometimes dangerous situations that arise when characters and scenes from enchanted books become real. As the teens learn about the library, themselves, and each other—their fates become intertwined. And when they stumble upon a scheme by someone in a distant realm to take control of all the knowledge in the universe, Johanna and Jackson are forced to put their lives on the line to battle an ancient foe.

CHRONICLES: THE LIBRARY OF ILLUMINATION is available from Amazon and Barnes & Noble.

C. A. PACK, author of Code Name: Evangeline, Evangeline’s Ghost, and the Library of Illumination novelettes, is an award-winning journalist and former television news anchor/writer from Long Island, New York.

Past Due by Jenna Bennett