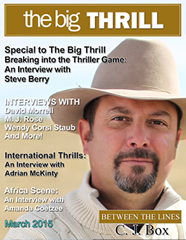 Read the stories that were featured in the March edition of The Big Thrill.

The Big Thrill kicks off March with a Between the Lines interview with bestselling author C.J. Box, who talks about life in Wyoming, his acclaimed work, and his latest bestseller, ENDANGERED.

March also brings a new series for The Big Thrill: The Big Break, where bestselling thriller writers tell their stories of how they broke into the thriller game. The inaugural article includes an interview with Steve Berry, the self-proclaimed “poster child” of why aspiring writers shouldn’t give up. Before he became a household name, Berry suffered 12 years and 85 rejections. Read more about his inspirational story by Jeremy Burns.

Michael Sears returns with The Africa Scene with his interview of Amanda Coetzee, and writer Layton Green is back with International Thrills, featuring Adrian McKinty.

This month’s edition also includes interviews with two ITW icons, the organization’s co-founder David Morrell and its co-president M.J. Rose, who talk about their latest highly-anticipated releases. And, of course, we interview more than two dozen ITW members about their latest, and greatest, thrillers.

Here’s what’s in store for March!

March 2 – 8: “Do publishers fact-check–or is that the author’s job? Talk about big mistakes you have spotted.”
March 9 – 15: “Do some writers tend to work too hard, too long on the first chapter and neglect the rest of the story? How do you avoid that pitfall?”
March 16 – 22: “The TV series Seinfeld claimed their characters never changed, should the same apply to book series?”
March 23 – 29: “Have international novels evolved in recent years?”
March 30 – April 5: NO ROUNDTABLE.

Congratulations to Patrick Kanouse, the winner of this month’s BIG THRILL giveaway. Patrick will receive an assortment of signed thrillers including Monday’s Lie by Jamie Mason, The Killing Season by Mason Cross, Empire Rising by Rick Campbell, Done in One by Grant Jerkins and Jan Thomas, The Someday File by Jean Heller, In Dangerous Waters by David O’Neil and Assault and Pepper by Leslie Budewitz.