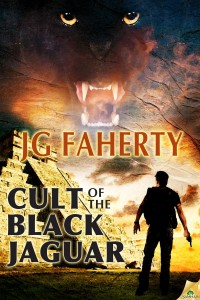 In the depths of the jungle lie mysteries drenched in blood.

Ethan Foster has spent a lifetime as a guide and bodyguard for archeologist Heathcliff Pascal. They’ve survived more adventures than they can count, but now, deep in the jungles of Central America, they discover a secret hidden from the world for centuries: the Cult of the Black Jaguar, presided over by an immortal goddess whose beauty is matched by her cruelty. She needs the blood of a virgin to bring her army back to life, and she’s found one in Heathcliff’s daughter, Jenny. It’s up to Ethan to stop her. It might seem an impossible task, but Ethan has secrets of his own. Dark secrets. Before the night is over, blood will be shed, and only one man—or monster—will survive.

“I’ve known JG Faherty since he was an up-and-comer. Now he’s arrived. Start reading him now – as in TODAY – so you won’t have to play catch-up later.” – F. Paul Wilson, author of the bestselling Repairman Jack series

CULT OF THE BLACK JAGUAR is available from Amazon.

A life-long resident of New York’s haunted Hudson Valley, JG Faherty has been a finalist for both the Bram Stoker Award® and ITW Thriller Award, and he is the author of six novels, seven novellas, and more than 50 short stories. He writes adult and YA dark fiction/sci-fi/fantasy. You can follow him at www.twitter.com/jgfaherty, www.facebook.com/jgfaherty, http://about.me/jgfaherty, and www.jgfaherty.com.