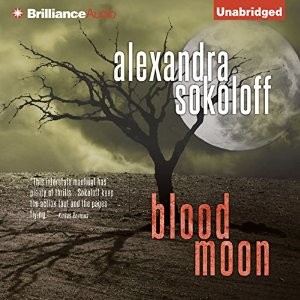 Twenty-five years have passed since a savage killer terrorized California, massacring three ordinary families before disappearing without a trace. The only surviving victim of his rampage was a child…who is now wanted by the FBI for brutal crimes of her own.

Special Agent Matthew Roarke is on an interstate manhunt to track her down, despite feeling torn between his dedication to duty and his sympathy for her horrific history and motives. But when Roarke’s search unearths evidence of new family slayings, the dangerous woman he seeks–and secretly wants–may be his only hope of preventing another bloodbath. He just has to find her first.

The pulse-pounding sequel to Huntress Moon is sure to leave listeners on the edges of their seats.

BLOOD MOON is available from Amazon, Amazon UK and Audible.

“This interstate manhunt has plenty of thrills…Sokoloff’s choice to present both Roarke’s and the killer’s perspectives helps keep the drama taut and the pages flying.” —Kirkus Reviews

Alexandra Sokoloff is the Thriller Award-winning and Bram Stoker, Anthony, and Black Quill Award-nominated author of the supernatural thrillers The Harrowing, The Price, The Unseen, Book of Shadows, The Shifters, and The Space Between, and the Thriller Award-nominated, Amazon bestselling Huntress/FBI thriller series (Huntress Moon, Blood Moon, Cold Moon). The New York Times Book Review has called her a “daughter of Mary Shelley,” and her books “Some of the most original and freshly unnerving work in the genre.”

As a screenwriter she has sold original horror and thriller scripts and adapted novels for numerous Hollywood studios. She has also written two non-fiction workbooks: Screenwriting Tricks for Authors and Writing Love, based on her internationally acclaimed workshops and blog (www.ScreenwritingTricks.com), and has served on the Board of Directors of the WGA, West (the screenwriters union) and the board of the Mystery Writers of America.

Alex is a California native and a graduate of U.C. Berkeley, where she majored in theater and minored in everything Berkeley has a reputation for. In her spare time (!) she performs with Heather Graham’s all-author Slush Pile Players, and dances like a fiend. She lives in Los Angeles and in Scotland, with Scottish crime author Craig Robertson.