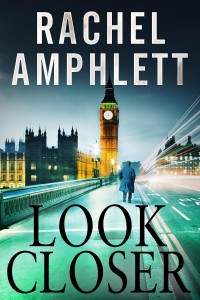 How far would you go to protect a secret?

How far would you go to expose a lie?

Will Fletcher seems to have it all – perfect job, perfect life. Then in one act of extreme violence, his world is turned upside down.

A bungled assassination attempt on a London street uncovers a disturbing conspiracy fuelled by organised crime and political ambition. Now, Will finds himself on the run, pursued by a dangerous enemy who will stop at nothing to protect his employer’s past.

The only way to stop the chain of events is to follow a trail of clues that lead to the heart of British politics.

With the date for the UK General Election only days away and the killers closing in, Will is running out of time to deliver his own version of vigilante justice and expose the corruption. As the web of lies and deceit unravels, Will knows the answer’s out there.

All he has to do is look closer.

Everyone has secrets. Everyone lies.

LOOK CLOSER is available from Amazon, iTunes and Kobo.

‘This is by far the best book I have read in a long time… Look Closer is an energetic, intriguing, terrifying ride, with a twist that will smack you from here to next Friday. Put it on your “to read” list. Now.’ – Storm in the Stacks/Goodreads

Rachel Amphlett previously worked in the UK publishing industry, played lead guitar in rock bands, and worked with BBC radio before relocating from England to Australia in 2005.

After returning to writing, Rachel enjoyed publication success both in Australia and the United Kingdom with her short stories, before her first thriller White Gold was released in 2011.

The Lady and the Wolf by Steve Myers