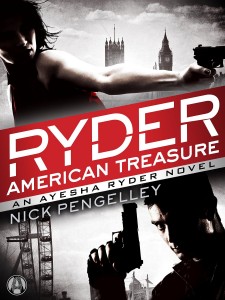 During of the War of 1812, British troops ransacked the White House and made off with valuables that were never returned. Two centuries later, a British curator finds a vital clue to the long-vanished loot. Within hours, the curator is assassinated—and Ayesha Ryder, a Palestinian-born antiquities expert, is expertly framed for his murder.

Who could be behind such a conspiracy? And why do they want Ryder out of the way? To find out, she picks up a trail leading from a mysterious nineteenth-century letter to the upcoming presidential election. As Ryder dodges killers in the shadow of hidden alliances, sexual blackmail, and international power plays, she finds that all roads lead to the Middle East, where a fragile peace agreement threatens to unravel . . . and another mystery begs to be discovered.

Ryder’s rarefied academic career and her violent past are about to collide. And her only hope of survival is to confront a powerful secret agent who has been waiting for one thing: the chance to kill Ayesha Ryder with his own two hands.

RYDER: AMERICAN TREASURE is available from Amazon and Barnes & Noble.

Nick Pengelley is the author of the political thrillers Ryder and Ryder: American Treasure. Australian by birth, he’s had careers in Australia, Canada, and the United Kingdom as a law professor, legal consultant, and analyst on Middle East politics, which is his passion. Pengelley lives in Toronto with his wife, Pamela.

Cult of the Black Jaguar by JG Faherty

February 16 - 22: "Could you write or revise your novel if word processors were not available?"