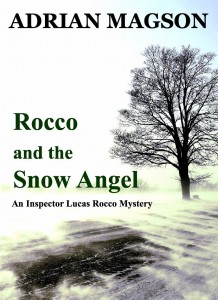 A former village priest is found shot dead, execution-style, in a snow-covered field. The killing re-opens memories of a wartime scandal around the villages of Poissons-les-Marais and Fouillmont, when a young infatuation led to a spate of coldly efficient assassinations.

But who’s responsible for this particular murder? And why so long after the event? Is it some secret revenge? The result of a long-held hatred from the days of the priest’s involvement in the Resistance in WW2?

For Inspector Lucas Rocco, getting to the truth means pushing aside the veil surrounding old Resistance activities, ignoring rumour and gossip, standing up against heavyweight political connections… and tracking down a deadly, long-range killer with the ability to hide in open countryside.

ROCCO AND THE SNOW ANGEL is available from Amazon, Amazon AUS and Amazon UK.

“Adrian Magson is a classic crime star in the making.” DAILY MAIL

“Clever and complex, this taut and chilling new novel from Adrian Magson is a spine-tingling treat.” THE GOOD BOOK GUIDE

Adrian Magson is the author of 17 crime/thriller novels and hundreds of short stories and articles.

Author of the Riley Gavin crime series, the Harry Tate spy thriller series and the Inspector Lucas Rocco crime series set in France in the 1960, his latest novel is ‘Close Quarters’ – follow-on to the highly successful ‘The Watchman’, which saw the introduction of a new hero in close protection specialist Marc Portman.

A regular reviewer for Shots Magazine, he writes the ‘Beginners’ and ‘New Author’ pages for Writing Magazine, and is the author of ‘Write On! – The Writer’s Help Book’ (Accent Press).
Visit his blog at www.adrianmagson.blogspot.co.uk