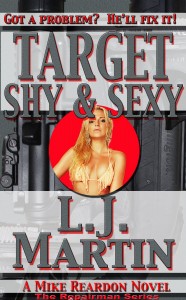 Mike Reardon is at it again, only this time it’s an easy bodyguard gig…and the body is beautiful and talented. One of America’s hot new country western singers. The hell of it is, she’s abducted before he gets on the job. Now it’s find her and find her in one piece, and not get himself and his buddies killed in the process.

An Amazon 5 Star Review: Don’t read this if you want to relax right now, because Mike Reardon and a few of his ex-marine buddies will have you on the edge of your seat until you get to the end. This is one of L.J. Martin’s latest “Repairman Series” thrillers that earns my “Couldn’t put it down” award. It is exciting and detailed to the point that you feel that you are with Mike, as he travels around several states and interfaces with Organized Crime, Federal and Local Police to solve a friends problems. You won’t be bored. You will be enlightened, and you will want more L.J. Martin reading material.

L. J. Martin is the author of three dozen works of both fiction and non-fiction from Bantam, Avon, Pinnacle and his own Wolfpack Publishing. He lives in Montana with his wife, NYT bestselling romantic suspense author Kat Martin. He’s been a horse wrangler, cook as both avocation and vocation, volunteer firefighter, real estate broker, general contractor, appraiser, disaster evaluator for FEMA, and traveled a good part of the world, some in his own ketch. A hunter, fisherman, photographer, cook, father and grandfather, he’s been car and plane wrecked, visited a number of jusgados and a road camp, and survived cancer twice. He carries a bail-enforcement shield. He knows about what he writes about, and tries to write about what he knows. His work has topped the Amazon genre lists in Crime, Action Adventure and Western. He has over 120 videos posted on youtube, edited by him on Final Cut Pro, search ljmartinwolfpack. You can join him at facebook.com/ljmartinauthor, on twitter at @westwrite, and on other social media sites. His Wolfpack Publishing LLC has had great success in eBooks, having a disproportionate share of top action adventure novels in that genre.