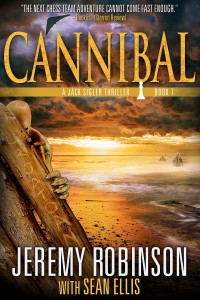 Still recovering from the tragic loss of a good friend, Jack Sigler, callsign: King, leads the Chess Team—a crew of former Delta operators—back into action. But what should be a routine snatch-and-grab to capture a drug cartel leader, escalates out of control, throwing the team into a challenge unlike anything they’ve ever faced. An enemy from their past, who is close to unmasking their identities, joins forces with the psychotic cartel kingpin, setting a trap that will shake the team to its foundations.

While the team battles enemies old and new, King’s fiancée, CDC disease detective, Sara Fogg, struggles to stop a strange outbreak that transforms the infected into ravenous, inhuman monsters. Once responsible for the disappearance of the Roanoke settlers, the disease now threatens to spread across the planet, ending human civilization in a bloodbath of violence.

Hunted by humans and monsters alike, King and the Chess Team face a desperate choice—sacrifice themselves or let the world bleed.

Jeremy Robinson and Sean Ellis, the international bestselling team behind Prime and Savage, return with a riveting and horrific tale reminiscent of Matthew Reilly’s and James Rollins’s best. Settle in for a long night as the Chess Team journeys around the world, through history and to your worst nightmares.

CANNIBAL is available from Amazon, Barnes & Noble and Kobo.

The Jack Sigler Thrillers, starting with PULSE, are now in development as a feature film series with director Jabbar Raisini, whose work on Game of Thrones earned him an Emmy Award.

Jeremy Robinson is the international bestselling author of fifty novels and novellas including Uprising, Island 731, SecondWorld, the Jack Sigler thriller series, and Project Nemesis, the highest selling original (non-licensed) kaiju novel of all time. He’s known for mixing elements of science, history and mythology, which has earned him the #1 spot in Science Fiction and Action-Adventure, and secured him as the top creature feature author.

Robinson is also known as the bestselling horror writer, Jeremy Bishop, author of The Sentinel and the controversial novel, Torment. His novels have been translated into twelve languages. He lives in New Hampshire with his wife and three children.

Sean Ellis is the international bestselling author Magic Mirror and several thriller and adventure novels. He is a veteran of Operation Enduring Freedom, and he has a Bachelor of Science degree in Natural Resources Policy from Oregon State University. Sean is also a member of the International Thriller Writers organization. He currently resides in Arizona, where he divides his time between writing, adventure sports and trying to figure out how to save the world.