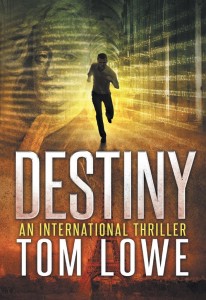 When former CIA code-breaker, Paul Marcus, receives the call he thinks it’s a hoax. He’s asked to analyze a cache of papers found locked in an old trunk. They were the last manuscripts written by Isaac Newton. Using Newton’s math and notes, Marcus begins to see a pattern leading to a prophecy so frightening that to reveal it will change world events. At the time of his death. Newton was searching for ancient biblical codes that may open a locked window into future events. Newton helped explain gravity — but could he do the same for human destiny?

DESTINY is available from Amazon.

Tom Lowe’s latest mystery/thriller novel is DESTINY. It is Tom’s first stand-alone book. DESTINY is an international thriller that begins with the discovery of Sir Isaac Newton’s lost notes and how a Pandora’s Box opens when a former CIA code-breaker puts the dangerous puzzle pieces together.

The first novel in the acclaimed Sean O’Brien series was A FALSE DAWN. It was followed by THE 24TH LETTER, THE BUTTERFLY FOREST, THE BLACK BULLET, BLOOD OF CAIN, and BLACK RIVER.

The next book to be published featuring Sean O’Brien is CEMETERY ROAD.