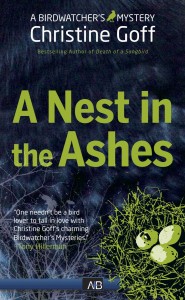 The critically acclaimed Birdwatcher Mystery Series focuses on environmental concerns through bird-related issues, and wraps them in a delectable, page-turning suspense story that keeps even the most seasoned Mystery fans guessing until the very end!

Eric Linenger’s job, as a National Park Service ranger, isn’t always easy. He is tasked to oversee a “prescribed burn” of a thousand acres in Rocky Mountain National Park, which not only means containing the fire to the necessary acreage, but also protect the precious habitats of the local birds.

However, once the fire is ablaze, the delinquent flames spread wildly out of control, and Eric’s boss, Wayne Devlin, is found dead near the fire’s origin.

Eric takes it upon himself to investigate an increasingly perplexing arsonist mystery, and uncovers the disturbing truth that many people–including his own friends–had motives to ensure that the deadly fire would rage unchecked.

A NEST IN THE ASHES is available from Amazon, Barnes & Noble and iTunes.

“Very entertaining. Birders and nature lovers alike will enjoy this new twist on the cozy mystery.”
–The Mystery Reader

“You don’t have to be a bird lover to fall in love with Christine Goff’s charming Birdwatcher’s Mysteries.”
–Tony Hillerman, New York Times bestselling author of the Navajo Mystery series.

“The birds of the Rocky Mountains will warm the binoculars of birders who have waited a lifetime to see real stories about birds in a popular novel.”
–Birding Business Magazine

Christine Goff is the award-winning author of the bestselling “Birdwatcher’s Mystery” series. She began her career writing non-fiction for local, regional and national publications.

Goff was named “Rocky Mountain Fiction Writers’ 2002 Writer of the Year,” while two of her novels were Finalists for the prestigious Willa Literary Award for Best Original Paperback Fiction. Her latest novel, DEATH SHOOTS A BIRDIE, was also a Finalist for the Colorado Authors League Best Genre Fiction Award.