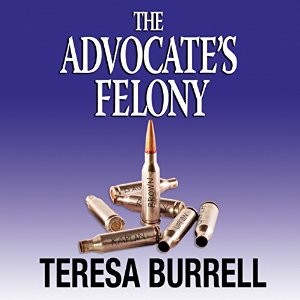 When Attorney Sabre Brown’s phone rings at 2 a.m. she’s shocked to hear from her brother, Ron, who has been in Witness Protection for the past seven years. Someone has discovered his whereabouts and is trying to kill him – and possibly Sabre as well. Sabre and her private investigator, JP, leave sunny San Diego to find her brother who has gone underground. Based on a single clue, they begin their search in the cold, wintry Pacific Northwest.

“This is undoubtedly the best book and series I have ever read. Fast paced, eventful, suspenseful, and very HUMOROUS. A Must read. But start with the first book. You won’t be disappointed.”
-Kindle Customer

THE ADVOCATE’S FELONY is available from Amazon and Audible.

Teresa Burrell has dedicated her life to helping children, first as a teacher and then as an attorney in juvenile court. She continues to advocate children’s issues and write novels. She taught school for twelve years before she received her juris doctor degree. She opened a private law practice which specialized in domestic, criminal, and civil cases until she landed in juvenile court where she focused on abused minors. Burrell has received several awards from the San Diego Volunteer Lawyer Program for her countless hours of pro bono work with children and families. Burrell writes legal suspense mysteries that incorporate many of her experiences as a lawyer. Her “Advocate Series” consists of, The Advocate, The Advocate’s Betrayal, The Advocate’s Conviction, The Advocate’s Dilemma, The Advocate’s Ex Parte, and most recently, The Advocate’s Felony.