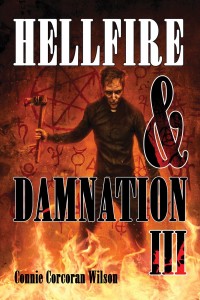 This 3rd installment in the award-winning series organized around the 9 Circles of Hell in Dante’s “Inferno” takes you on adventures that will keep you awake at night long after you’ve finished the book. A Satanic minister incites a mentally-challenged youth to murder; teenagers find themselves trapped in a cave with a dangerous secret; New Zealand warriors face the British in The Battle of Gate Pa; the death of a young college student from hypothermia under mysterious circumstances is investigated: they’re all here. Illustrations for each story and cover art, once again is by Vincent Chong, five-time recipient of the British Fantasy Award and Winner of the World Fantasy Award for Best Artist of 2013.

“Connie (Corcoran) Wilson’s Hellfire & Damnation is a remarkable collection of somber, noirish, flat-out scary and altogether satisfying stories that seek to find hope in a dark world that defies it. Her subtle irony and penchant for finding terror in the least expected places will generate comparisons to Stephen King and Dean Koontz , with just a hint of Philip K. Dick thrown in. But don’t be fooled; Wilson has a wondrous voice in her own right, and her tight, twisty tales establish her as a force to be reckoned with.”
(New York Times Best-selling author of the Caitlin Strong series, Jon Land.)

“Let me start right off by saying that Connie Wilson presents what I call ‘matter-of-fact’ horror. She writes solid, declarative sentences rife with dark undertones. No fancy description for Connie. No sentimental musings. No soft emotionalism. Just hard-edged documentary style storytelling. Jolting objective sentences made all the more disturbing by their cool directness. Frankly—and I consider myself well-read in the shock genre—I have never encountered a style such as she displays here, in story after story. Connie Wilson’s dark talent is unique, and readers will stagger away from her icy tales, stunned and groggy.

Her frame for this collection is also unique: stories built around Dante’s nine Circles of Hell. A unifying concept that is classically fresh…Once you read this remarkable collection, you’ll emerge with some twisted new thoughts…
Believe me, Dear Reader, you’ve never encountered anything like “Hellfire & Damnation,” the series. I have a final word for it: WOW!
(William F. Nolan, Living Legend in Dark Fantasy, author of “Logan’s Run” and “Nightworlds.”)

“Hellfire & Damnation is all the things any good compilation of short stories of a chilling nature should be. It’s scary, holds one’s interest enough not to want to put it down, and, at times, it is a little disturbing. Wilson has written a book of short stories that will not only keep you up late nights reading, but might also keep you up long after you have stopped reading.”
( Evelyn Smith, author of “City of the Undead” and “Transylvania, Louisiana.”)

Connie (Corcoran) Wilson has been writing for publication since the age of 10 and has taught writing at 6 IA/IL colleges. Two-time winner of the Chicago IWPA Silver Feather Award (2012, 2014) and honored as Writer of the Year by the Midwest Writing Center, she writes fiction, nonfiction, humor and everything in between. She also was Yahoo Content Producer of the Year (2009) and has written for numerous blogs, magazines and newspapers during nearly six decrades of writing. A graduate of the University of Iowa, she also studied at Berkeley, the University of Chicago, Western Illinois University and Northern Illinois University. Winner of 2 Pinnacle awards (NABE) and an ALMA award for the short story, “Confessions of an Apotemnophile” [in the original “Hellfire & Damnation,”] she is the author of the 3 novels in “The Color of Evil” (TheColorOfEvilcom; RedIsforRage.com; KhakiEqualsKiller.com) series, as well as an annual illustrated Christmas series for children (www.TheXmasCats.com). See the trailer for this newest short story collection at www.HellfireAndDamnationTheBook.com and read about her other works at ConnieCWilson.com.