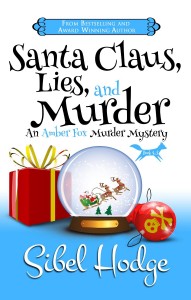 When the bones of St Nicholas, the original Santa Claus, are stolen from a special exhibit at the Natural History Museum on Christmas Eve, insurance investigator Amber Fox is hot on the thieves’ trail.

Jinxed spells, freaky insects, and a sack full of secrets take Amber on a bumpy sleigh ride. But can she restore the relics back to their natural resting place and preserve the true spirit of the Yuletide Holly Days? Or is Santa lost forever?

“If you like Janet Evanovich’s Stephanie Plum I think you will really like Amber Fox – I know I do.” Martha’s Bookshelf

SANTA CLAUS, LIES, AND MURDER is available from Amazon, Amazon UK and iTunes.

“Amber Fox is a modern, career-driven woman who seems to be a cross between Kinsey Milhone and Gracie Hart (Miss Congeniality). I enjoyed the great mixture of action adventure and slapstick. I found myself chuckling out loud and on one occasion snorting water out my nose.” ~ Coffee Time Romance & More

“Amber Fox was hilarious with her tough as nails outer persona and her hysterical one-liners that were frequently laugh out loud funny.
I definately recommend picking this book up!!” ~ The Caffeinated Diva reads…

“Amber Fox is the kind of strong lead female character with a great sarcastic wit that I love to read.” ~ To Read, Perchance to Dream

Sibel Hodge is the author of No. 1 Bestseller Look Behind You. Her Amber Fox Mysteries and romantic comedies Fourteen Days Later and The Baby Trap are International Bestsellers on Amazon, Barnes & Noble, and iBooks. She writes an eclectic mix of genres, and in her spare time, she’s Wonder Woman!

Her work has been shortlisted for the Harry Bowling Prize 2008, Highly Commended by the Yeovil Literary Prize 2009, Runner Up in the Chapter One Promotions Novel Comp 2009, nominated Best Novel with Romantic Elements in 2010 by The Romance Reviews, Runner Up in the Best Indie Books of 2012 by Indie Book Bargains, Winner of Best Children’s Book by eFestival of Words 2013, and Winner of Crime, Thrillers & Mystery | Book from a series in the SpaSpa Book Awards 2013. Her novella Trafficked: The Diary of a Sex Slave has been listed as one of the Top 40 Books About Human Rights by Accredited Online Colleges.