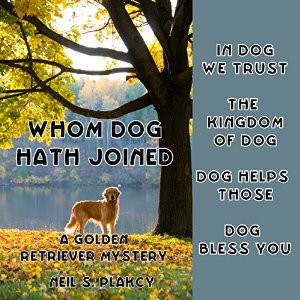 Reformed computer hacker Steve Levitan still gets a thrill from snooping into places online where he shouldn’t be. When his golden retriever Rochester discovers a human bone at the Friends Meeting during the Harvest Days festival, these two unlikely sleuths are plunged into another investigation.

They will uncover uncomfortable secrets about their small town’s past as they dig deep into the Vietnam War era, when local Quakers helped draft resisters move through Stewart’s Crossing on their way to Canada. Does that bone Rochester found belong to one of those young men fleeing conscription? Or to someone who knew the secrets that lurked behind those whitewashed walls?

Steve’s got other problems, too. His girlfriend Lili wants to move in with him, and his matchmaking efforts among his friends all seem to be going haywire.

Whether the death was due to natural causes, or murder, someone in the present wants to keep those secrets hidden. And Steve and Rochester may end up in the crosshairs of a very antique rifle if they can’t dig up the clues quickly enough.

WHOM DOG HATH JOINED is available from Audible.

I have read all of the previous stories in this series and enjoyed them all. The main character is very human, good and not so good. He wrestles a bit with guilt but is probably better than many of us. The dog part is excellent and also the police work. The story never lags, I never stop reading unless forced to by pressing needs. Why should I, I earned retirement. I recommend it to all that like a mystery story, logical and with an excellent ending. Unfortunately, we can all read faster than the author can write another! I look forward to another book. (Cardi Corgi Mama on Audible.com)

Neil Plakcy’s golden retriever mysteries have been inspired by his own goldens, Samwise, Brody and Griffin. A native of Bucks County, PA, where IN DOG WE TRUST, THE KINGDOM OF DOG, DOG HELPS THOSE, DOG BLESS YOU and DOG HAVE MERCY are set, Neil is a graduate of the University of Pennsylvania, Columbia University and Florida International University, where he received his MFA in creative writing. He has written and edited many other books; details can be found at his website, http://www.mahubooks.com. Neil, his partner, Brody and Griffin live in South Florida, where Neil is writing and the dogs are undoubtedly getting into mischief.