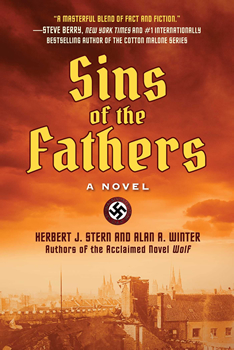 Authors Herbert J. Stern and Alan A. Winter are giving historical fiction fans reason to cheer. Their new thriller based on events leading up to World War II, SINS OF THE FATHER, may be the 21st century’s Winds of War.

This novel, based on historical facts, follows the efforts made by German military leaders, civil servants, and religious leaders to convince England’s government to help them stop the greatest threat to world peace—Adolf Hitler. Set between 1934 and 1938, this novel continues the story begun in their first collaboration Wolf, which covered the previous 15 years during which the German people indeed committed a true sin.

“They violated the Biblical commandment ‘You shall have no other Gods before me . . .’” Winter says, “by elevating a devil into a false god—Adolf Hitler—that leads them from Christianity only to sublimate their morality to the twin idols of conquest and domination, with enormous consequences to generations of Germans.”

The story of SINS OF THE FATHERS involves several famous, in fact, iconic historical figures. But none of them has the perspective for the best point of view. The authors had to create the right character for that.

“Our challenge,” Winter says, “was to create a protagonist that gave the reader a ringside seat as to how Hitler consolidated his power, cast aside the harsh provisions of the Treaty of Versailles, rebuilt the German military machine, and planned to expand Germany’s borders to gain more land and raw materials for another World War. Who better to tell this true story than the amnesiac soldier in the bed next to Hitler’s in a mental ward?”

Being a literal blank slate, Friedrich becomes the reader’s eyes and ears. Through him, we see that England’s Prime Minister Chamberlain avoided taking steps that might have avoided World War II. He could have been positioned to be the book’s antagonist. However, as Winter points out, you can’t write a book based on the deeds of the worst demon of the twentieth century—and perhaps of all time—and not make him the villain.

“Hitler is our villain,” Winter says, “but not for the usual reasons. Hitler is the villain because he becomes Germany’s new god, the prophet of a new religion—Nazism—that law-by-law, evil-by-evil, corrupts a nation.”

So like all great historical books, this one carries a strong message for our times. In Winter’s words, “SINS OF THE FATHERS is a warning of how fleeting and tenuous freedoms can be, and about the price a nation suffers when its people are bullied into being neutral. When being neutral is unacceptable.”

Stern and Winter dove into the painstaking research that they knew would breathe life into their book. That research centered around primary sources, firsthand reports, and interviews of individuals who knew the Hitler that few historians utilize.

“We read dozens of interviews by Michael Musmanno housed at Duquesne University,” Winter explains. “Musmanno was a presiding judge for the Einsatzgruppen trial in the US military court at Nuremberg. During the years 1945 to ’48, Musmanno interviewed scores of people close to Hitler from Albert Speer (Hitler’s favorite architect) to Franziska Braun (Eva’s mother) to Dr. Theodor Morell (Hitler’s personal physician). To read Musmanno’s interviews is to understand Hitler, the man. Similarly, we went through John Toland’s papers (Adolf Hitler: The Definitive Biography) in the FDR Library in Hyde Park, New York.”

Their in-depth research even solved a long-standing mystery raised in their previous book, Wolf. Was Adolf Hitler treated by a psychiatrist, Dr. Edmund Forster in 1918?

“Over the years, many have scoffed at the veracity of Dr. Karl Kroner’s report from 1943,” Winter says. “Kroner, the intake doctor at Pasewalk Hospital, named Dr. Edmund Forster as the psychiatrist that treated Hitler and who diagnosed him as a hysterical psychopath. The same historians that accepted Hitler’s pretense to celibacy have also accepted Hitler’s explanation that his loss of vision at the end of the Great War resulted from a gas attack. But from little-noted contemporaneous accounts, we learned that Hitler’s medical records not only did exist but were in the hands of the resisters who had them reviewed by Germany’s leading psychiatrist and neurologist, Dr. Karl Bonhoeffer, in 1938. The intent was to use these records when Hitler was brought to trial after the coup d’état. These records did exist as late as 1938.”

Well-researched, accurate historical novels must appeal to history buffs and academics, but they can risk losing the lovers of historical adventures. For Stern and Winter, their goal was always to have SINS OF THE FATHERS stand tall as a thrilling, suspenseful, historical novel.

“Friedrich takes the reader inside the third Reich,” Winter says. “As Hitler’s cohort, Friedrich is subject to scrutiny as he aids the resisters plotting to overthrow the regime. Friedrich’s dilemma is found in the book’s title: Are the children of Germany responsible for the sins of their fathers? If so, to what extent are they expected to correct them?”

All thrillers need to be suspenseful, which can be a writing challenge when everyone knows how the story ends. But writing is a craft, and even with a known outcome, a skillful writer can create a page-turner as this book solidly proves.

“The backbone of this story, that German military leaders and prominent citizens were hours away from overthrowing Hitler and his regime, has never been portrayed in truths that light up this story,” Winter says. “There is suspense right up to the last sentence.”

The historical accuracy and lives depicted in SINS OF THE FATHERS serve to heighten the tension at every twist and turn. Historians and teachers may use this book in their curricula for a more accurate picture of how Hitler and the Nazis came to power with the goal to conquer Europe. For the rest of us, it’s a thrill ride that feels all too real because it was.