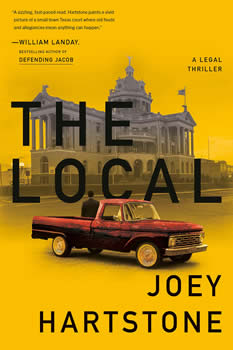 Legal thrillers sometimes take place in a rather generic courthouse. But in THE LOCAL, Joey Hartstone shows us that like everything else, the thrills—and the dangers—are bigger in Texas.

The Federal courthouse of the Eastern District of Texas, in the town of Marshall, is where patent lawyers go for quick jury trails and huge punitive payouts. James Euchre is one of the town lawyers who serve as the local voice for the big-city legal teams that want to sway small-town juries. Euchre’s latest client is Amir Zawar, a wealthy Pakistani American businessman trying to defend his life’s work against a software patent infringement claim.

After a heated confrontation in a preliminary hearing, hometown hero Judge Gardner is found murdered in the courthouse parking lot, and all the evidence points to Zawar. He has motive and opportunity—and no alibi. Plus, he is the son of immigrants and a total outsider.

Defending Zawar is new territory for a patent attorney like Euchre. But Judge Gardner was Euchre’s good friend, and taking the case looks like the only way he can get definitive answers. Euchre must navigate the world of criminal defense law in a town where everyone knows everyone. He’s up to the challenge.

“If you met him at a party, you would definitely like him, but you wouldn’t actually learn anything,” Hartstone says. “He’s mastered the art of superficiality as a means of protecting himself. He’d charm you and then move on before you ever got a chance to get to know him.”

Euchre is fictional, but the author assures us that the courthouses in the book are all real, and they’re all on the same block.

“The federal courthouse is modest,” Hartstone says, “and from the looks of it, you’d never know that it was one of the most important patent courts in the country. The old Harrison County Courthouse is ornate and beautiful. It’s right in the heart of town, and every street seems to lead directly to it. Even though they haven’t had trials inside for decades, I felt compelled to fudge the truth just a little bit so I could use this incredible setting.” 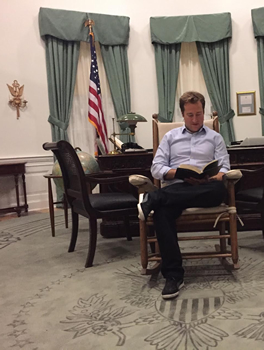 Hartstone is not an attorney, but he says that aside from writing, the law is the only profession he ever seriously considered.

“I nearly went to law school a couple of times,” he says, “and I will forever regret not having my law degree. That being said, as soon as I became a writer on The Good Fight, I realized that I was much happier writing about lawyers than being one.”

So the events in this book are all fictional, but the idea to write it came from one of Hartstone’s friends named Nathan Speed.

“Nathan is an intellectual property lawyer from New England, and the first time he told me that his work frequently takes him to a small town in East Texas, I was captivated. I remember the night vividly, and I never wavered about wanting to write this story,” Hartstone says.

As you get into this book, you realize it is as much a murder mystery as it is a legal thriller. Hartstone says that happened somewhat organically as he was developing a story about a patent lawyer.

“I realized I could not make a case about intellectual property law interesting enough to sustain an entire novel,” he says. “I asked myself two questions, and a mystery was born: Who got killed? Who killed them? It took a lot of work to answer both, but it was work that I wanted my character to do as well.” 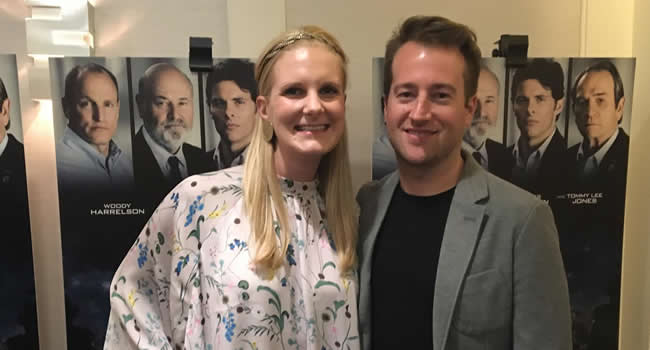 Hartstone and his wife, Abby, at the premiere of 2017’s Shock and Awe, which Hartstone wrote

Hartstone has a good deal of experience writing for television. For this novel, he was able to rely heavily on what he learned as a writer on The Good Fight and Your Honor.

“Working in television, you break stories quickly and frequently,” Hartstone says. “On one 10-episode season of The Good Fight, we might have 25 legal cases. So to do a story in which there was only one was very fun. The processes of breaking down a story and outlining a script are so ingrained in the way I think now, I followed the same path instinctively when I crafted THE LOCAL.”

Still, there are differences. Hartstone found the most challenging aspect of writing a novel versus writing a script or an episode of TV was that he couldn’t read it all in one sitting. That seemed to make the rewriting process far more difficult.

“When I’m rewriting a script, I usually read it in its entirety at least once a day,” Hartstone says. “Everything is fresh in my mind, and I’m experiencing the whole story. With a film script, I probably read through it several hundred times. To not have that luxury with this book was intimidating.” 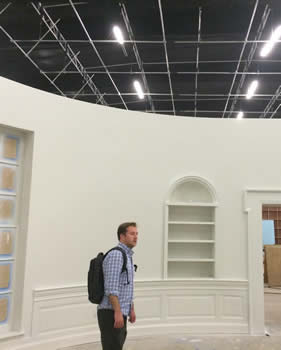 Despite the differences, Hartstone never lost sight of the fact that he wanted to write a thriller with clear stakes that either involved the life of the character, or what mattered most to that character.

“In THE LOCAL, I was far more interested in what mattered to Euchre, and putting that at risk, than I was in putting Euchre in harm’s way,” Hartstone says. “Although I did that as well. The closest person to him is murdered, and he desperately needs to know who did it. Hopefully, by the time Euchre is in danger, the reader cares about him enough to hope he makes it through.”

With any luck, we’ll see James Euchre again. Hartstone says he always envisioned this as a series.

“I’ve got the next couple of book ideas in my head,” he says. “I love all of the characters in THE LOCAL, so I would be grateful to spend some more time with them.”

When you’ve read THE LOCAL, you’ll be just as eager to spend more time with James Euchre and his friends, especially if he gets into a case as exciting and involving as this one.