“My Process Begins with Rage” 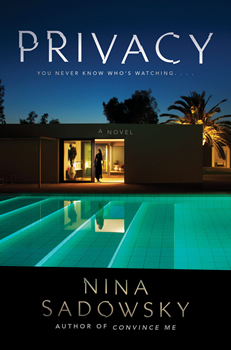 Nina Sadowsky says her writing process often begins with rage, fueled by her fury at society’s injustices and indignities. And only after she’s identified the source of her anger can true character development begin.

“I populate the book with people possessing wounds and vagaries that I can then juxtapose against my themes for maximum impact,” she says.

In her latest book, PRIVACY, Sadowsky wanted to introduce her protagonist—Dr. Laina Landers—and her competency and ability as a therapist, while also “revealing hints of her relatable interior anxieties about her personal and professional life,” she says. “The extreme circumstance I put her in, of saving someone’s life in front of news cameras. also allowed for early exploitation and establishment of one of my key themes, the societal and personal cost of living so much of our lives publicly.”

This is, of course, the central theme of PRIVACY. In it, Laina has become a bit of a local celebrity after intervening in a high-profile hostage situation. But not everyone is impressed by her competence—in fact, someone is out to destroy her… and they’re using her patients to get to her. What begins as a bizarre and unsettling series of “gifts” being delivered to each of them transforms into a chilling tale of being “watched.”

Before long, Laina realizes it is not just her career on the line—it’s her life.

In this exclusive interview with The Big Thrill, multi-talented author Nina Sadowsky delves deeper into what motivates her to write, the rabbit holes she dove into while researching this book, and how she uses “secrets” to ramp up the tension throughout her novels.

PRIVACY opens with a compelling chapter. How much of the book do you normally know before you begin writing? Does the first chapter come first—and how much rewriting is common for that opening scene? 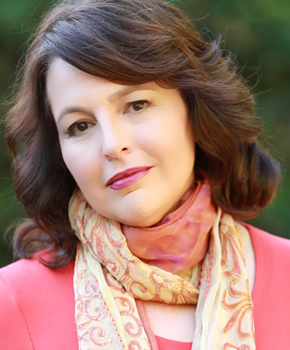 I always have an outline when I go to a first draft, so I know the general shape of the story as well as the ending. Knowing the ending in advance (particularly if it’s a twist, which I always aim to deliver in a thriller) is essential for hiding all the clues to the twist in plain sight. I feel this is essential for delivering a surprise that feels satisfying and not manipulative. That being said, midway through the drafting process, I almost always re-outline and find that the path to that ultimate twist may twist itself.

As for the extent to which the first scene is rewritten, all writing is rewriting, and I rewrite every scene every time I look at it. I’d rewrite my published books too if I could.

My sister is a forensic psychologist, so I’m always drawn to characters that have a therapy/psychologist/counselling background. What can you share about the inspiration for Laina?

Part of my inspiration for Laina came out of my virtual visits with my own therapist while we were in lockdown. I felt stretched to my breaking point many times during the pandemic, and I began to wonder how my therapist was managing to handle everyone else’s grief and anxiety on top of what must have been her own. I know clinicians are trained to compartmentalize, but I couldn’t help but feel empathy toward her, and that made me want to write a therapist as a character. Then I created characters with histories I knew I could test through circumstance to explore their individual breaking points. Many of those characters are Laina’s patients, and that therapist-patient relationship was a very useful way to explore the patients’ vulnerabilities. 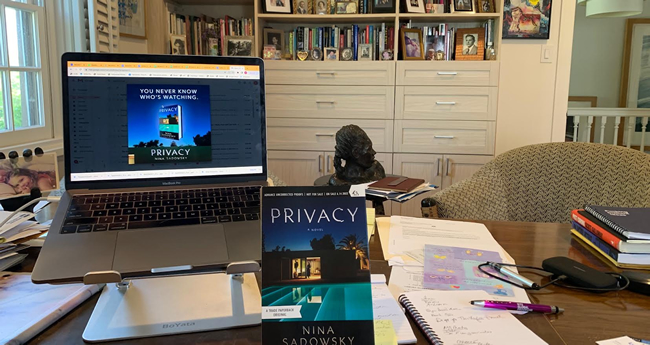 The virtual nature of my therapy sessions was also inspirational as conducting so much of life, including and especially something with the intimacy of therapy, through Zoom made me intensely aware of how much our privacy has eroded as a result of technology, and our own apparent willingness to give away our images, data, and content for free.

Being a thriller writer, I also logged on to a Zoom meeting one morning and, finding a blank square where I was to meet a colleague, imagined him murdered somewhere just out of camera range. These churning thoughts about technology and privacy led me down many paths of both research and paranoia (both of which were useful in the writing of this book).

You’ve created tremendous suspense throughout the novel, in part, I think, due to the underlying theme, which relates to the word “privacy” and what that really means in today’s world. What is the message you hope to convey with this novel? 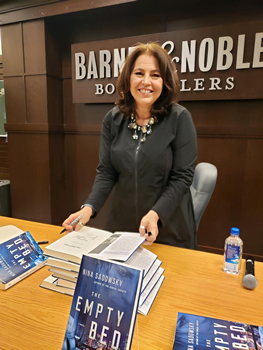 Sadowsky attends the launch of her 2020 thriller The Empty Bed at the B&N at the Grove in Los Angeles.

I examined stalking (both cyber and real life) and how technology has contributed to making that disturbing practice easier. I looked at Big Tech data aggregation and how we are all commodified. As a content creator, I was also horrified to learn how much online piracy costs authors and publishers, musicians, and filmmakers. We are in a constant cycle of gathering and sharing information, and that makes us all vulnerable. I have an uneasy truce with technology but also have learned to take more precautions. I hope readers first and foremost enjoy the ride of the book and then will become more aware and take the many simple steps one can to better protect oneself (from using a browser like DuckDuckGo that doesn’t aggregate your data or confirming cookies choices to only allow those that are necessary).

Keeping on the subject of suspense, The Big Thrill is as much for aspiring writers as it is for readers. What tips would you offer on how to ramp up the suspense?

Probably my favorite tip is to give each character at least one secret, preferably more. Once a character has a secret, the hows, whys, whos, and whens of its exposure can really ramp up the tension. I also like to play with shifting perspectives, unreliable narrators, and ending a scene or a chapter on a question or a new problem. 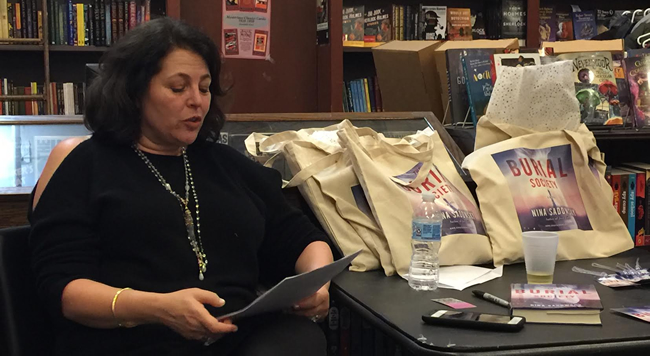 Sadowsky reads at the Mysterious Bookshop in New York City to support the release of her 2017 psychological thriller The Burial Society.

You’ve woven in a great romantic interest for Laina—and how clever to make Cal a reporter, a profession known for trying to “work around” privacy laws in pursuit of a good story. Their romance creates a good distraction for them both. What about Cal made him the perfect match for Laina?

Love and the risks we will take in pursuit of it are often interlaced with whatever else I’m writing about. There are no higher stakes for a human being than risking love with its potential for heartbreaking loss, which is why so many amazing and shocking acts are committed in the name of it. I knew I wanted Laina to risk loving someone, and then as I began to develop Cal, his profession was born from the theme. Who better than an ambitious reporter looking for his next big break to pit against someone professionally bound to keep secrets? I knew it would create instant tension between them, which would work both for and against the attraction I wanted them to have for one another.

Before I read about your background in screenwriting, I had envisioned this as a movie—your writing is very visual. How has your experience in screenwriting helped, or hindered, your success as a novelist? 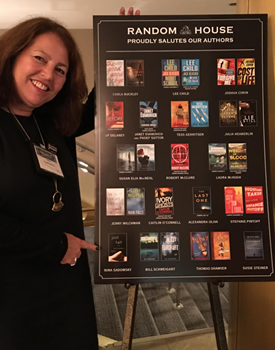 Sadowsky at ThrillerFest 2016—the year she was a debut author.

Writing for film and TV has taught me a lot about craft that applies when writing in any medium. The importance of creating characters for whom a reader feels empathy, how to reveal character through action, the need to decide upon themes, and a personal understanding of why I want to tell a story, the value of structure, and how to lean into emotional language for maximum impact, just to name a few. But I actually think it’s my experience as a producer that influences the visual nature of my writing. When I envision a scene, I think about all the elements I would have to bring together in order to shoot it—what the light looks like, the production design and wardrobe, even whether I would need a greensman or an animal handler. That training makes me look at a scene differently and lends itself to decisions about the kind of details that can make a scene come alive visually.

I’d be remiss if I didn’t ask if you’d considered writing a screenplay for PRIVACY—it seems primed for the big screen.

Three of my four previous books have been developed for TV. I adapted Just Fall as a pilot for Starz, but it didn’t ultimately get a greenlight. My Burial Society series is in development, which has been a long and winding road, as development in Hollywood so often is. That being said, if someone wants me to adapt PRIVACY, I’d be happy to make a deal!

I started working on a book about love cons, predators who are seemingly in it for the rush of the con even more so than any money they might extract from their victims. I’m fascinated by both sides of this equation, the con artist as well as the person desperate or lonely enough to be duped. I’ve done a lot of research and have an outline. But when I recently sat down to work on it, a whole other book began to emerge, a family-centric story complete with secrets, murder, and dare I say it, ghosts. The ghosts are speaking to me and seem to have hijacked the process, so I’m just rolling with that (them). The love cons will have to wait.