Diversity and Inclusion in an Expansive Universe 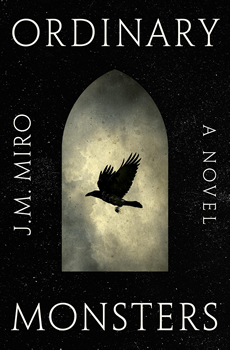 It is hard to determine what to say when confronted with a masterpiece of a novel. Not all novels are masterpieces, obviously—some are great while others merely good—and there are some we shudder to think of still. A poorly placed phrase, a terribly constructed sentence, generic characters being nothing and doing nothing, easily forgotten.

Then there is ORDINARY MONSTERS, a book that does not believe in poorly placed phrases or terribly constructed sentences, a book whose characters you aren’t allowed to forget. A book I do not have the writerly skill to convey the depths of. But here we are.

ORDINARY MONSTERS is not about one person, nor one place or one thing. There’s not even one time, but an interweaving set of years in the late nineteen century where the unusually—one might say magically—gifted characters roam the world, trying to make sense of who they are, where they should be, what they should do, and deal with the ramifications of their actions.

Before you are inclined by this length of time and scale of setting to mistake this story for an epic, don’t. There is no one hero, just as there is no one villain. The adults in this world are, at best, shady, and the children—all gifted with unusual talents, all orphans—must carefully navigate around the adults’ uncertain intentions, hoping that they will not ultimately be betrayed. 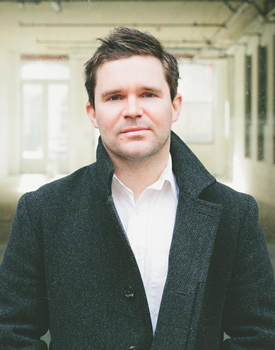 Miro moves his cast, like his language, with precision. Each player is placed with care, as if on a chessboard, stretched across time in space, or like a line of dominos, waiting to be tipped. If the fleeing maid saves a baby in 1874 England, if the woman detective saves the shining boy in 1882 Illinois, if the man who manipulates dust accepts a dark pact in 1873 in the South Pacific, the line of dominos cascades forward, and we have ORDINARY MONSTERS.

Below is an exclusive interview with J.M. Miro, where he answers our questions on writing a novel of such massive scale, how to title a book, and the different stories we encounter in our lives.

Your characters roam the world and its places, from Natchez to Edinburgh to Tokyo, from London sewers to midwestern circuses, to old kabuki theaters—each iconic in their own way. How did you go about selecting these locations?

I knew that I wanted to write an expansive novel, one that acknowledged the diversity and complexity of the nineteenth century world. The actual settings themselves emerged, as always for me, in a kind of back and forth between the characters as they took form, the lives they’d lived before showing up on the page, and the demands of the story.

Why the late eighteen hundreds? Was there ever another time period you considered setting this story in? What did being in the nineteenth century allow ORDINARY MONSTERS to do that would not have worked in another time? 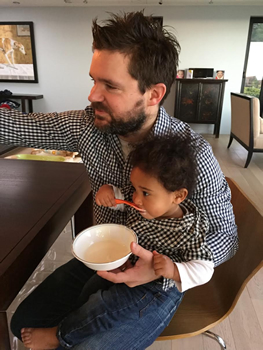 Miro with monster (actually his son)

There was never another age, not for this story. The nineteenth is the first century to leave us a comprehensive historical record—daily broadsheets, investigative journalism, photography—all deliciously available to the writer for pilfering. It’s also the beginnings of the recognizable modern world, an age in which the globe is growing smaller, and people are moving between continents and vast cities with increased intensity. All of this made it a fitting era for ORDINARY MONSTERS—but also the density in Victorian cities, the crush of humanity, the proximity between the destitute and the ferociously wealthy, allow for a complicated and fascinating setting. There’s something familiar about it. We know that world, and yet it’s so removed from us. It’s that balance between the familiar and the strange that drew me to it, I think.

As far as we know, all of the characters are without family, whether through death or separation. Was this purely for logistical purposes—having everyone unanchored from anything outside of Cairndale, keeping a psychology of drifting alone-ness, or something else entirely?

Ah! It’s just possible there may be a reason for it, a terrible reason…

Based on the interweaving complexity of the novel, it seems that the stories within ORDINARY MONSTERS were deliberately and carefully planned. How long did it take for you to map out this book? How did you organize yourself?

“Organize” is a kind word for what my creative process looks like. I’ve lived with this story for many years now. My process is to think through a shape for the book, and then begin to map out what will be needed and where. And then to begin to write. But I’m a great believer that stories are generally smarter than their authors; my task, often, is to listen closely and try to hear what the novel wants to do, where it sees its own connections. And so, almost immediately, I’ll begin straying.

Why “ORDINARY MONSTERS?” What other titles were you considering, and why did you land on that one? Do you know and are you allowed to say what titles you are considering for the second book in the series? 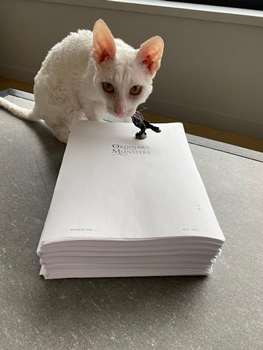 The title came early to me; I’d had it in mind for several years. I liked the claim it was making about difference and belonging and just who, exactly, it might be referring to. There’s something sinister in it, too, which some of my early readers remarked upon, but there’s also something inclusive and consoling. That kind of double-play interested me. I did dance back and forth between the title of this first novel and the title of the series as a whole, wanting to find a balance there. The second book? I do, actually, have its title already clear in my mind. I envisioned the trilogy as a single comprehensive story, and a part of that process was delineating what fell where in terms of each book. It might be unwise to announce the second title just yet, though.

Also in the vein of naming, each character felt perfectly matched to his name. Alice Quicke was Alice Quicke—she could be nothing else. At the moment of reading her name, you knew most everything about her. So many writers struggle with names, and yet there was no imperfectly chosen name within this book. How did you go about achieving this?

That’s kind of you! Names are so difficult, sometimes. You know when you get it right. The names of the characters came from several different sources, sometimes arriving —as with Alice Quicke—and sometimes arriving late, as with Miss Davenshaw, who had been written under a different name for a while but didn’t sit comfortably in her own skin until her right name was found. That’s true with people, too, of course. When our daughter was born, it took us weeks to name her. We just didn’t know who she was yet.

Many reviewers have compared ORDINARY MONSTERS to shows like The Umbrella Academy and The Nevers, which might be considered a superficial take. What bits of media—books, movies, shows, comics, your pick—would you find to be a more true comparison?

I take it as a tremendous compliment that anyone would see a resemblance between my work and those wonderful shows, though neither was an influence on ORDINARY MONSTERS. As for me, I think it’s difficult sometimes for the writer to think of their own comparisons. The deeper I go into a particular story, the more it feels like its own thing, and the resemblances fade away. There are affinities, of course. But those tend to be personal, and perhaps not evident in the work itself. Affinities in terms of tone, or theme, or obsession. I do believe it’s a kind of enrichment, the way the different stories we encounter can talk to each other inside us. We’re all so much better for the echoes.

What is something that you hope all readers will take away from ORDINARY MONSTERS? A message, an idea, a feeling, something else? 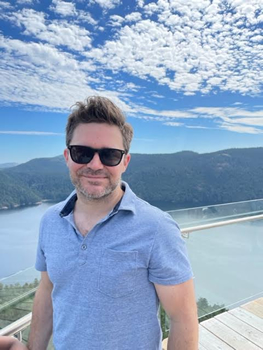 Miro at the Malahat summit on Vancouver Island

I’m not sure that’s for me to say. I’ve always thought books tend to make their own private covenants with their readers. What I can tell you is something of the covenant this book, ORDINARY MONSTERS, has made with me personally. It has everything to do with found family, difference, belonging. I wanted to write a novel in which children who would normally be at the mercy of the world might find a degree of agency and be granted an opportunity to discover they’re not completely alone. I think now that I wrote the book, in many ways, for the lonely boy that I was, as if to say: It’s all right, it gets better, just hang in there.

As the first book in The Talents trilogy, what other places will we be visiting in the future? Any hints on what else we will see?

I can’t say too much yet. But the survivors of Cairndale will travel further afield—further than they’ve ever yet traveled—and the greater world of the late nineteenth century will come into sharper focus.