A Timely and Ambitious Military Thriller 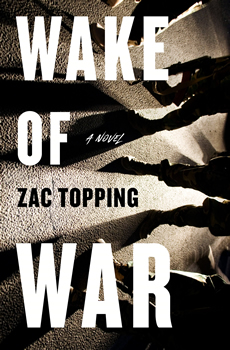 WAKE OF WAR, the new military thriller from Zac Topping, reaches beyond the action to be both timely and quite ambitious. This book looks past the battlefield to examine just how far those with power will go to keep it.

As the novel opens, The United States is falling apart. The crashing economy and faltering government are enough to spark an insurrection. The Revolutionary Front gains power and overtakes Salt Lake City. That city has a special significance for the author, since he first saw it after he left the Army when he was in a bad place, mentally and emotionally.

“I was angry, adrift, plagued by this pervasive sense of hopelessness,” Topping says. “It was a rather dark time in my life, to say the least. Then I went on a trip to Salt Lake City, and everything changed. I don’t know how or why. I’m not a spiritual person, but…I was moved. I was just struck by the awe-inspiring landscape of the mountains and the desert and the sheer size of everything, and it was like suddenly the world went from dull gray to vibrant technicolor. My entire life changed after that experience.”

There were also several locations in the Salt Lake Valley that reminded him of northern Iraq. So when it came time to choose a setting for the book, it seemed appropriate to choose the valley that, in his words, saved his life.

Rebels in the mountains surrounding a densely packed cityscape is both a volatile and familiar setting around the world. And the world of WAKE OF WAR is not far from our own. Set in 2037, Topping’s dystopian near future is increasingly familiar.

“Back in 2017 while drafting the book, I remember wondering if anyone would even buy into the concept of another actual American civil war,” Topping says. “It seemed outlandish. But I think it’s evident that we are on a precipice. There are certainly a great number of things that are wrong with our country, but is war really the only path to resolution? Do we truly understand the consequences of taking such a drastic action, not just on the state of politics, but on the people who have to fight in—and live with—that war?” 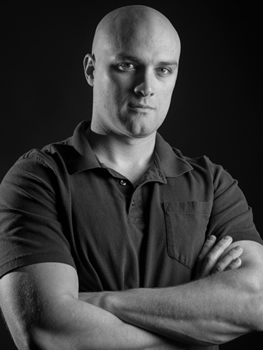 Topping highlights this reality using well-drawn characters. One of these is James Trent, an average young guy who’s likable enough and easy to talk to. He enlists, but he never thought he’d see combat. Now Trent finds himself on the front lines fighting for something he isn’t sure he believes in.

“He has his own goals,” Topping says, “and an idea of himself that doesn’t quite mesh with his current situation, which becomes the genesis of his troubles. He certainly doesn’t see himself as a hero, especially since he’s called to do things he never thought he’d really have to do. I think his story is a familiar one in the world of military service. And considering Trent serves in the United States Army, he definitely represents the government side of the conflict. However, service doesn’t always equal endorsement, which is an interesting dichotomy that often afflicts many of the men and women who serve in the armed forces.”

On the other side of the conflict, we meet sharpshooter Sam Cross, a tough, self-reliant young woman from Texas who commands considerable shooting skills.

According to Topping, “When she was younger, she lost her family during a violent confrontation with government forces, and since then, she’s dedicated her life to making herself an instrument of war so that she can fight back. Where Trent joined the Army for the benefits, Cross joined the rebellion for vengeance. She wants to be there, wants to hurt those who hurt her. Or so she thinks. But wanting to fight and actually fighting are two different things. She doesn’t believe she’s a hero, even if everyone around her keeps telling her that she is. She’s not there to earn renown, she’s there for a righteous purpose.”

So Cross is the inverse of Trent in just about every way. She is a civilian and a rebel fighter representing the opposition to oppressive government control. She comes across as tough and guarded, but beneath that hardened exterior is a young woman with passion and personality. She’s even got a sense of humor hidden somewhere beneath her scars.

Unlike most thrillers, it’s hard to label people good guys or bad guys in this one. This is no accident. As the author would tell you, no one ever thinks they’re the villain.

“No matter how insane or flawed a person’s logic is, they see their cause as the one that’s just,” Topping says. “I worked hard to write a story where the answer to this question isn’t abundantly clear, and I leave it up to the reader to figure out.”

All of that said, this is a thriller, and it features some gritty and quite realistic battle scenes, which was an important goal for Topping.

In his own words, “I want the reader to feel the exhaustion, the fear, the elation at survival, and the horror of facing what one has to do to get there. Considering the heavy nature of the book, I knew it was important to get the action right. I had to be honest, but not gratuitous. Descriptive, but not overly so. Now I’m not James Trent or Sam Cross—their stories are their own—but I have been a soldier. I have walked through crowded city streets surrounded by people who’d happily end my life. I know the sounds of small arms fire and exploding RPGs and the whistle of incoming mortars. I have known anger, regret, remorse, desperation.”

So for the battle scenes, Topping has either seen it, been through it, or known someone who has. That experience undoubtedly helped lend accuracy and, more importantly, sincerity to the book.

“I wanted to write something substantial, something with weight and sincerity and vulnerability,” Topping says. “I wanted to prove to myself that I could write something worth being read. Don’t get me wrong, I love straight-up traditional thrillers, I love escapist fiction and plan to write more in that style in the future, but this was the story I knew I had to tell first. I firmly believe that there are valuable lessons we can learn through fiction, and hopefully WAKE OF WAR helps add to the conversations we need to have in order to shape a better future.”

That, of course, is for the readers of WAKE OF WAR to decide. I can only say that you will certainly enjoy the ride.