Features, Latest Books, On the Cover
1 month ago
by R.G. Belsky
0 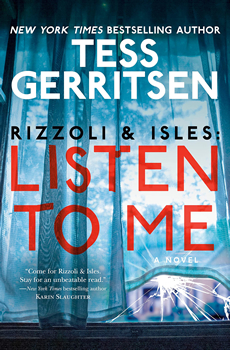 The good news is that New York Times bestselling author Tess Gerritsen is back with another Rizzoli and Isles thriller in LISTEN TO ME, the 13th book in her hugely popular series. The even better news is there’s a terrific story here about Rizzoli’s mother Angela, who shows us how she’s just as dogged and determined a crimefighter as her daughter.

It starts with Boston homicide detective Jane Rizzoli and medical examiner Maura Isles investigating the seemingly senseless murder of a woman found brutally bludgeoned to death in her own home. The victim is a beloved nurse and recent widow, but soon secrets begin to emerge about her making covert calls to burner phones and a possible connection to an unsolved hit-and-run case.

Meanwhile, Angela Rizzoli is pestering Jane—as well as her local police department—with calls and complaints about suspicious activities she believes are going on in her sleepy suburban neighborhood. Everyone thinks the older woman just has an overactive imagination, until Jane eventually learns that sometimes mothers do know best.

“Writing her was the most fun I’ve had with any character,” Gerritsen says, when asked about the frequently hilarious scenes between Jane and her mother in LISTEN TO ME. “She really came alive for me when I heard her in my head, speaking with her strong Boston accent: ‘When you see something, say something.’ In this book, Angela does just that—and of course takes it too far.

“She’s the neighbor with a heart of gold who just can’t stay out of everyone’s lives. Also, there’s the mom/daughter dynamic, which is familiar to many of us. We love our moms, and we’re frustrated by them. We want them to stop nagging us, yet we sometimes desperately need their advice. The scenes between Angela and Jane reflect that loving push/pull. In fact, that’s the theme of the book: the unbreakable bond between mothers and daughters.”

When asked to describe the female crimefighting team of detective Jane Rizzoli and medical examiner Maura Isles to us as she sees them, Gerritsen says, “Jane: Fierce, driven, impulsive, and loyal. She’s the friend you want at your side when things go south. Maura: Cerebral, introverted, brilliant, and generally uncomfortable around people. Unlike Jane Rizzoli, she always thinks things through before she acts. And the few times she doesn’t, she lives to regret it.”

And why does Gerritsen think the pair is so popular with readers?

“I think they’ve grown attached to the characters, which surprises me, because Jane Rizzoli is certainly not a cuddly person,” she says. “The mystery in each novel has to stand on its own as a suspenseful investigation, but the plots are not why the readers keep coming back to the series. They come back to see how Maura’s affair with the priest is going, whether Detective Frost’s (Rizzoli’s partner) wife has returned to him, and if Jane and Maura are getting along better since their last argument. Readers want to be part of the family.”

The story in LISTEN TO ME is filled with shocking twists right up until the last chapter. Did Gerritsen know where this story was going when she started it?

“No, and I never do. It’s one of the challenges of being a plunger, not a planner—I have to figure out where the story is going as I write it,” she says. “It wasn’t until about two-thirds through the first draft that I knew what Angela’s neighbors were really up to. It wasn’t until about three-quarters through it that I knew how the Angela plot thread would affect Jane’s investigation. It’s a frustrating way to write a book, but it’s the only way that’s ever worked for me.”

Many readers, or course, also know about Rizzoli and Isles from the TV series about them, starring Angie Harmon as Jane and Sasha Alexander as Maura.

“I loved just having the characters (or a version of them) reach a wider audience,” Gerritsen says of the show. “There are differences between the books and the TV series, of course—there always are. The TV versions are far more glamorous, and the bond between the women starts off strong (unlike in the books, where their attachment grows more slowly), but the theme is the same: strong women, working together.”

How has the Rizzoli/Isles relationship changed and grown over the years in her books?

“I never planned to write a series. My first book with Rizzoli, The Surgeon, was a stand-alone crime/medical thriller where Rizzoli was only a secondary character, the partner to the lead detective,” Gerritsen says. “Since I thought this was a one-off, I never imagined Jane would go on to a second book. In fact, I planned to have her killed in The Surgeon, so I didn’t try to make her particularly likeable. But as I wrote that first draft, and she came alive for me as a brilliant if prickly investigator, I started to respect, even like her. When it came to her ‘death’ scene, I just couldn’t kill her off, so Jane lived. And went on to star in the next book, The Apprentice.

“Maura Isles was introduced as merely a secondary character in that second book. Again, I didn’t foresee that she would take on a much larger role during the story, but in her quiet, unassuming way, Maura crept onto the stage. The women’s relationship was strictly professional in The Apprentice, just two colleagues solving a crime, but they were such different personalities that their interactions fascinated me. As the showrunner of Rizzoli & Isles put it, ‘They’re like Capt. Kirk and Mr. Spock.’

“That relationship really came into focus in the third book, The Sinner, where we discover secrets about Maura’s past. This is when the women begin to bond. As with any real friendship, that bond has its ups and downs through the next books. And that’s been the real fun of writing a dual-character series—watching Jane and Maura become closer, sometimes pull apart, but always remain friends. They may disagree, but that mutual respect is always present.”

With Gerritsen’s own medical background (she was a physician herself before becoming a bestselling author), she says she definitely sees herself more like medical examiner Maura than Jane. “I’m very much a Maura. Introverted, uncomfortable in crowds, and—I like to believe—logical. Jane is my complete opposite.”

What about aging of the characters in the series? “My characters do age, but very slowly. (Poor Jane had to endure pregnancy for three books before she finally gave birth.) They also evolve in other ways, with changing relationships and characters moving in and out of their lives.”

Gerritsen says she knew she wanted to be a writer when she was seven years old—even though she went on to medical school and worked as a physician before becoming an author.

“My dad told me it was no way to make a living and suggested I apply myself to science instead,” she says. “I’d always enjoyed biology and had thought about being a doctor, so I took a detour to medical school. But years later, I went on maternity leave from my job at a hospital, and there I was at home, with an infant son who liked to sleep. That’s when I started writing my first book. A few years and a few unsold manuscripts later, I sold Call After Midnight (a romantic thriller) to Harlequin Intrigue. A few published novels after that, with two kids at home, I left medicine to focus on writing.”

Since then, she has become an international bestseller—writing medical thrillers, crime thrillers, and even screenplays (with her son Josh) in addition to her Rizzoli and Isles series.

“I hate being boxed into writing only one type of novel featuring one particular set of characters. Most writers have dozens of different stories in their heads, and we want to tell them all. I know that my Rizzoli & Isles books sell the best, but there are times I need a break from Jane and Maura. Or a story will call out so powerfully that it can’t be ignored. When inspiration grips you that powerfully, you can’t ignore it. Regardless of what the market demands.”

Oh, and her real name is Terry Gerritsen—not Tess. “I made that change when I was about to publish my first romantic suspense novel with Harlequin,” she says. “I wanted it to be clear to readers that I was a woman.”

What’s next for Gerritsen? “I’m working on a novel about retired spies in a small Maine town and what happens when one finds a young woman murdered in the driveway. Yet another fun shift in genre.”

On the Cover: Jennifer Hillier