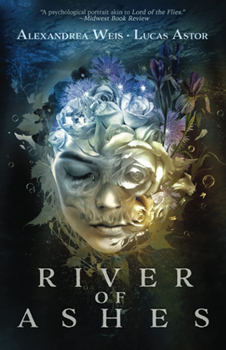 If your tastes run to psychological thrillers filled with chills, plot twists, and rising body counts, you’ll want to pick up RIVER OF ASHES from Alexandrea Weis and Lucas Astor.

This novel shows us that an idyllic Louisiana river town can harbor dark secrets. The story revolves around Beau Devereaux, the only child of a powerful family. He is popular and admired, but he is not who he appears to be. Unlike most thrillers, the lead character here is no hero, although he would consider himself one.

“His ego could never let him see himself in any other light,” says Weis. “He’s narcissistic to a fault. At a cocktail party, he would present himself as the intelligent, handsome, and well-mannered young man who is the golden boy of St. Benedict. But that’s not the real Beau. It’s a mask. The sadistic monster lurking beneath is every parent’s nightmare. With psychopathic tendencies and a love for inflicting pain, he is the boy next door gone horribly wrong.”

So Beau might present as the perfect pupil and president of the student council, but the authors call him a classic “never judge a book by its cover” character. How bad is he? Well, murder is the ultimate act of violence, but Beau goes beyond that—he revels in inflicting pain.

“Control in all things is his motto, and he wields that control not only in how he presents himself to the world, but on the unsuspecting young women he lures to his hideaway in the cells behind the remains of the abandoned abbey,” Weis says. “The secluded setting allows Beau to carry out his deeds without interruption. It isn’t the killing that satisfies him. It’s the control he has over his victims. The further he can make them bend to his will, the more obsessed he becomes. Eventually, he goes too far and discovers the rush of killing.”

What makes the story truly chilling is the fact that Beau does everything with a smile—and right under the nose of his family and the residents of his small town. This kind of psychological thriller is very difficult to do well. Why did Weis and Astor choose this particular genre? The characters, of course.

“You can write compelling characters in this genre with all the bent and twisted psychological foibles that make for a great villain,” Weis says. “Thrillers also make the psychology of a character—the why they did what they did—an essential element. You don’t have that depth of motivation in other genres, such as romance. Readers can understand the desire to find someone to love. We all want that. But the desire to kill, maim, torture, and humiliate victims is beyond many of us. That’s what makes this genre so compelling.”

Of course, true villainy would never go unopposed. But no superhero arises to stop Beau in his tracks. Instead, the women Beau hurts seek their revenge.

“It seems fitting that those injured the most oppose Beau,” Weis says. “It was also an important element of the story—victims can have control over their tormentor in the end. Readers and writers also find that satisfying. We want that in life and sometimes don’t get it, but to be able to offer that sweet ending in a novel is poetic justice.”

Reviewers agree that this book gives us a skin-crawling story. But what is the secret to writing a story that will creep people out? The authors say you must first write characters that draw readers in, and you do that by giving them someone they love to hate.

As Weis says, “Beau is diabolical, but he also represents most young women’s ideal man. They find themselves attracted and, as the story develops, are later repulsed by his actions. The attraction makes what the character does to others reprehensible.”

Some readers might ask how people could not see through his charade, but if you think about it, similar people in real life do fool us in this way. And the right setting helps sustain the atmosphere. In this case, Weis is familiar with the setting—she’s from Louisiana, and St. Benedict is literally in her backyard.

“I cross the Bogue Falaya every day to get to the town of Covington,” she says, “and I pass The Abbey, where an actual seminary school sits on the banks of the river. Every place described in the book is real. The setting is another character in this book and a necessary one. The river, The Abbey, and the town of St. Benedict bring to life the creep factor that makes this story so compelling. There’s no other place with so much atmosphere as the bayous and back roads of Southeastern Louisiana. It’s a unique place, and if I was going to write a Southern Gothic thriller, I had to set it in the location I know best.”

This work is very atmospheric, the kind of thing the writer has to get their head and heart into. It’s hard to picture how two different people can set a tone like that together. However, judging from their previous work, both Weis and Astor are pretty twisted storytellers. So that was a good start.

“We had the same goal for this series, which made collaboration much easier,” Weis says. “We saw the same evil tendencies in Beau and wanted to push the boundaries to get readers into an uncomfortable zone. Luke laid the groundwork by creating intimidating characters and the heinous actions that set Beau on a path to destruction. I added the St. Benedict setting and developed the world while adding my personal experience in dealing with sexual abuse victims and mental illness to the story.”

It was clearly a harmonious relationship, and we hope it will continue to grow as they develop the series. If you love stories that prompt you to leave the lights on while reading, RIVER OF ASHES is your chance to get in on the ground floor of what promises to be an exciting roller coaster of a ride.

Alexandrea Weis, RN-CS, PhD, is an IPPY award-winning author, advanced practice registered nurse, and wildlife rehabber who was born and raised in the French Quarter. She has taught at major universities and worked with victims of sexual assault, abuse, and mental illness in a clinical setting at many New Orleans area hospitals. She is a member of the International Thriller Writers Organization and Horror Writers Association.

Lucas Astor is an author and poet with a penchant for telling stories that delve into the dark side of the human psyche. He likes to explore the evil that exists, not just in the world, but next door behind a smiling face. Astor currently lives outside of Nashville, TN.

Between the Lines: Rachel Howzell Hall

The Sky Club by Terry Roberts