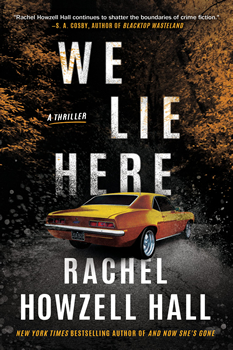 Acclaimed author Rachel Howzell Hall was that kid. The kid who kept a pen in her hand at all times, scribbling in notebooks, on loose-leaf paper, in her big brother’s yearbook, and even on the backs of church bulletins. She drew the line on walls, buildings, and freeway overpasses.

It would seem her path to publication had begun paving its own way long before she started her first novel. But all that scribbling of her youth paid off. Her debut, Quiet Storm, vaulted her into pop culture royalty—it was chosen as a “Rory’s Book Club” selection, the must-read book list for fictional television character Rory Gilmore of Gilmore Girls.

As high an honor as that was, Howzell Hall continues to have books published with “great notice.” She is the critically acclaimed author and Los Angeles Times Book Prize finalist for And Now She’s Gone, which was also nominated for the Lefty, Barry, and Anthony awards. Her novels have also been nominated for an International Thriller Writers award, and most recently, last year’s These Toxic Things was announced as a nominee for the 2022 Strand Critic Awards.

Her latest release, WE LIE HERE, is sure to continue in the tradition of attracting “great notice.” It’s the chilling story of a woman’s trip home for what is intended to be a celebration—but becomes the stage for murder. As Yara Gibson tries to figure out who killed her former childhood friend Felicia, family secrets are revealed, leaving Yara to wonder if anything she believed about her family is true. But in order to answer that question, Yara must be willing to risk everything—including her life.

In this exclusive interview with The Big Thrill, Howzell Hall delves deeper into the inspiration for WE LIE HERE, gives us an in-depth look at her writing process and advice for aspiring authors, and shares a little about what we can expect from her next.

What inspired WE LIE HERE? 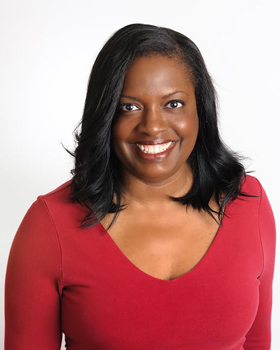 I also wanted to tell another origin story, not just Yara’s story but the story of her parents, Barbara and Rob, before they had their two daughters. I’m a mother now, and my daughter is 18. Of course, she’s seen me primarily as her mom. But as I share with her my experiences in college and as a young 20-something single woman in Los Angeles, she’s realizing that I was Rachel Howzell, who loved going out dancing and wearing throwaway pieces of spandex dresses and skirt. I was a woman before I became her upstanding paragon of a mother. I wasn’t perfect, and I did embarrassing things—fortunately for Gen X, we didn’t have social media platforms to capture our shenanigans. In WE LIE HERE, Yara learns more about her parents as real people—and that’s a little upsetting to her.

WE LIE HERE is also inspired by a buck-wild true crime story. I’d give you the name of the case, but that would be too much of a spoiler alert. After you read, I’ll share.

The protagonist in WE LIE HERE, Yara, is a television writer on a popular mystery TV show. Did that come from your experience in a writer’s room? An interest in writing for TV and film? Why did you decide to make her a TV writer? 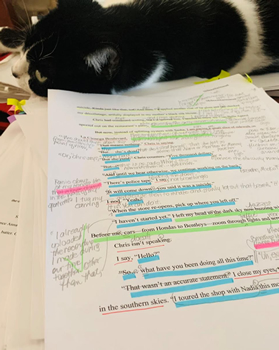 Howzell Hall’s editing process for her 2021 thriller These Toxic Things: pencils, highlighters, and a cat

I’m not a TV writer (though I do write for a living but in a non-profit healthcare setting). I wanted Yara to be a storyteller on a large scale. She plays out scenes in her head and writes the lines she wants people to say. In one scene, she laments that her father is not playing his part, not “acting right” in preparation of this anniversary party she’s planning. Yara has a naturally cinematic brain and so this job as a TV writer was a perfect fit.

When people run away from home, where do they usually go? Hollywood. To be in the pictures. To make it big. And even though Yara didn’t technically run away, and even though she’s only 60 miles away, Hollywood is hella different than Palmdale.

Parts of me would love to write for TV and film, but I like the reliability of my current job now. One day, when my books are successfully being adapted for the screen, I’d love to be involved—but I’d leave the actual writing to the pros. I respect their art too much—it really is a different type of writing than novels.

What about Antelope Valley made you want to set a story there?

Antelope Valley—and specifically Palmdale—is located in the Mojave Desert, a little over 60 miles northeast of Los Angeles. There was a great migration of Los Angeles families back in the ’80s and ’90s—families wanted to get away from the violence, to find affordable housing. Many people like my grandparents, good Seventh-Day Adventists, wanted to leave the city since they believed we were in the “last days.” These reasons aren’t all that different from other suburban flight stories.

But this flight was to the desert. There was nothing out there for kids to do in the desert. So the trouble that parents wanted to leave stayed with them—thanks to their own children. Gangs came–and not just one kind of gang. Black, white, sheriff’s deputies—the AV had it all. And with gangs, drugs come. And violence.

Meanwhile, many families are still trying their best to live their American dream, to experience a middle-class Americana… which can be hard to do when there’s meth and white power gangs and a dust storm.

And speaking of dust storms… there’s the environmental issues that come with Palmdale and the Antelope Valley. It’s. The. Desert. Extreme weather, right? And the weather conditions were then exacerbated once construction companies started ripping out the trees and brush to build houses. Dust storms are a result of that stripping. And fires. And flash-flooding.

So I wanted to put a hardworking family who are trying to keep it together in an inhospitable place. I wanted to place a character like Yara, an asthmatic, in a setting where she couldn’t breathe. I wanted her to be hot and sticky, sipping for air in a city she ran away from, away from a mom who she’s always felt wanted her to leave. 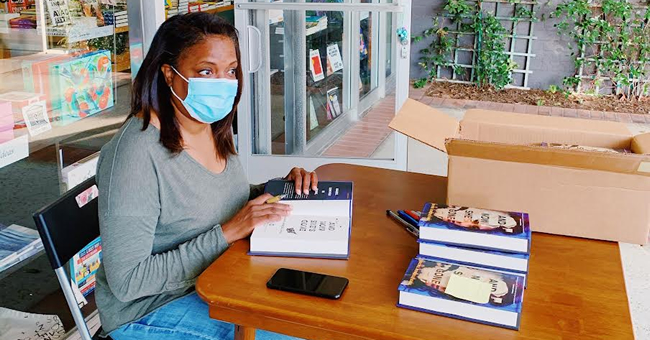 Your prose is a signature element of your novels. Which authors inspired and influenced you as a writer? Who did you read when you were younger?

Thank you for noticing—yes, my prose is important to me. I just don’t want to write a sentence to get to the “good stuff.” I want it all to be good stuff. I wish I had more time to shape and shape some more—but then, I’d never get anything done. I do the best I can with the time I have (in between Mom stuff, day job stuff and you know, eating, sleeping, and doing laundry).

Stephen King has always been my North Star. He writes regular people in extraordinary circumstances, and the way he writes feels simple. His stories are engaging even if some of the characters scare you or anger you. As a reader, you want to lean in and learn more about these characters, those settings.

I’m also inspired by Toni Morrison, whose sentences are more dense but incredibly magical and poetic. Again, she writes regular people in extraordinary circumstances. I just marvel at her writing. My dream is to be considered a combination of King and Morrison. Engaging. Strange. Everyday, but…not.

As a child, I read lots of King, but I also loved Tom Clancy and Jackie Collins, Sidney Sheldon and Judy Blume. I skipped right over The Babysitter’s Club and headed straight for Wifey. I discovered Michael Crichton as a teenager—The Andromeda Strain blew my mind. His characters weren’t ordinary people, always experts, but there was always this sense of dread, the sense that “this could really happen,” and well… in many ways, Crichton was a prophet.

When you plotted this novel (if you plotted) did you know who the villain was going to be? Seems like it legitimately could’ve been a handful of other characters. 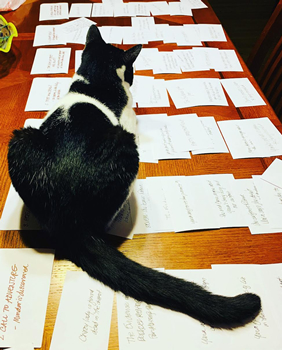 GusGus, one of Howzell Hall’s three writing assistants, helps beat out the first draft of WE LIE HERE.

Yes, I plot! And I knew who the villain was—and yeah, the sad thing is there could’ve been other characters just as dastardly. I see life as that. So many people who we’d never expect are silently or passively hoping to end us, who hope that we “get ours,” whatever that means to them. And I tried hard to write a story so that all levels of villains can share why they feel the way they do.

This goes to my belief that we’ve all slighted people. We’ve all committed little crimes that may not be illegal but may be immoral, unethical, or thoughtless. We’ve all hurt someone—that quick merge into someone else’s lane may leave that person feeling stung, ignored, violated, even. We know and have heard road rage stories about someone mindlessly cutting in front of another person and the consequences leading to violence.

As a plotter, could you walk us through your process for creating a novel?

I am a plotter, though I do wander off the path sometimes—but that’s only because I have my map and know how to get back. So my process:

Do you have any advice for upcoming writers? Would you have done anything differently on your journey to become a published author?

Yes! Put your butt in the seat. Writing is a verb—you gotta do it. I won’t dictate that you should write every day, but I do believe there’s a benefit to doing exactly that. Each day, we meet new challenges, new people, new ways of thinking and how people say things. As writers, we capture those things, right? For me, if I don’t catch the ways I’ve changed or thought on page that next morning at 4:40, I risk losing it forever. Also, as a day-jobber, sometimes I feel that my output is slow, that I’m not progressing. By writing every day, I feel forward motion. I’m convinced that I’ll get there, that I’ll finish.

I’d also tell a new writer that they shouldn’t fret if a story doesn’t immediately work. My failed second novel that never got published? It took nearly 15 years, but that novel ultimately transformed into And Now She’s Gone, which was nominated for several awards, including the Los Angeles Times Book Prize. There’s no such thing as a dead story. You just don’t know how to write it yet. You haven’t lived that thing you’re supposed to live to know how to write that story.

I wouldn’t have done anything different—I consider all the dead ends, rejections, agent changes and disappointments as part of the process. The ability to empathize plays a huge part of being a successful writer—and I have tons of empathy, and I infuse it into my characters.

Yes—my next novel, What Never Happened, comes out next summer. It’s a story about a woman returning to Catalina Island to figure out… how it all went wrong. The bulk of this year, though, I’m focusing on helping my daughter transition into her first year of college. I’ll be experiencing empty-nest syndrome, which you know will eventually be shifted and shaped into a new novel.