Satire Explores Faith, Terrorism, and the Price of Success 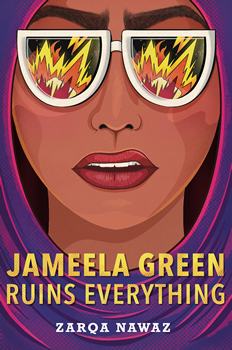 Jameela Green would do just about anything to see her memoir on the New York Times bestseller list—but when her wish doesn’t come true, she seeks spiritual guidance at her local mosque. The new imam—Ibrahim Sultan—isn’t exactly overjoyed by what he considers such a shallow request, but he agrees to help her under one condition: She must perform a good deed.

Jameela agrees, but in her quest to fill his request, she kicks off a chain of events that culminates in Ibrahim’s sudden disappearance. The only thing to do, she decides, is to rescue him—on her own. But of course, that doesn’t quite go as planned, and before long, Jameela puts herself and her family in grave danger.

In this interview with The Big Thrill, Nawaz provides insight into what inspired JAMEELA GREEN RUINS EVERYTHING, a hilarious black comedy that hooks you from the very first page.

You produce an award-winning television show and have written a memoir. Did you find writing a novel a challenge? If so, what were the challenges?

Writing a novel was a big challenge because it’s not as easy as it looks. It’s a very different medium from writing a television show. Television is very dialogue- and plot-driven. A novel has “interiority,” delving into a character’s mind and revealing what they’re thinking and feeling. Learning to write in that style was a learning curve for me. 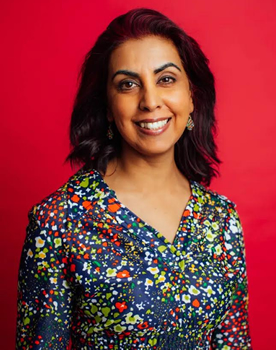 Well, I thought you did a great job getting inside the minds of your characters. Each character was well developed with distinct voices. I’m not always a fan of multiple POVs, but in this instance, it really added to the storytelling.

How is JAMEELA different from your memoir, Laughing All the Way to the Mosque and your Canadian television show described as a Muslim sitcom, Little Mosque on the Prairie?

For Little Mosque on the Prairie, I had to mine a lot of my experiences growing up in a mosque community, and my memoir, Laughing All the Way to the Mosque, tells the stories of my upbringing, and there’s definitely some overlap. I love writing flawed female protagonists and their misadventures, probably because it reminds me of myself. JAMEELA is different because I’ve never written an international spy novel. So far, all my stories have stayed close to home, but story always comes from character, and this character needed to leave home to rescue her friends, family, and herself.

I think readers will be surprised to find that they are indeed reading a spy novel. Your story appears to begin as darkly humorous women’s fiction and then drastically veers course, but in such a way that you absolutely have to stay for the ride to see how it all ends. While many would consider your work satire, you’ve written a story that done another way could be straight suspense or a traditional thriller, a la the television series Homeland. What came first: the humor around the subject or the idea for the story? Did you ever consider writing it without humor as a straight story about taking down the leader of a terrorist group (even though I know your MO is to always use humor to lampoon)? 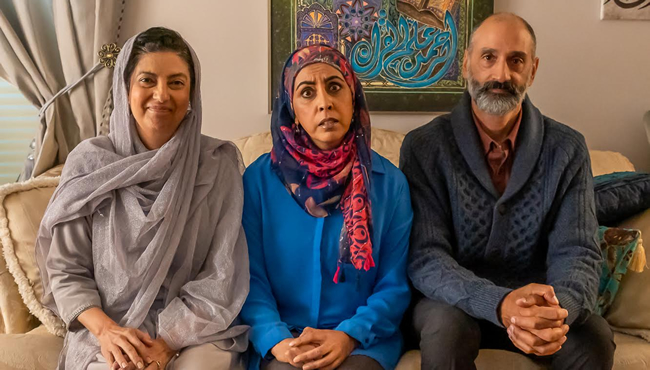 Humor is something that’s always come naturally to me in writing. But I always start with a main character and follow their desires. I don’t outline which makes for a longer, tortuous road, but it also leads me to unexpected places. When I first started writing this novel in 2014, ISIS had emerged, and it was on my mind. And as the story in the novel evolved, it was obvious that Jameela was going to become embroiled in this organization. Comedy is a way for me to process the world. I’d say it’s a coping strategy. It’s also a great way to communicating difficult issues with people in a non-threatening manner. After people laugh, they sit back and think, huh, that was funny, but it was also very serious.

Considering when your first book was published, the world is very different now in terms of accepting diverse stories. How did you find your brand of humor received with your previous works versus now?

A lot of right-wing writers had a hard time with Little Mosque on the Prairie when it first came out. I remember being interviewed by Glenn Beck, who was certain that Muslims didn’t have a sense of humor. They didn’t want us to be perceived as regular human beings.

It wasn’t until 2019 when Hulu, a streamer put out Ramy, a show about a young Muslim man grappling with his faith. Traditional networks are risk averse and like to play it safe. Having said that, they have produced great shows like Superstore, Jane the Virgin, etc. The UK has been more active putting out Muslim-themed shows such as Man like Mobeen and now the wonderful We Are Lady Parts. Disney is releasing Ms. Marvel, which has a Muslim in the lead. So we’re getting there. It’s become more normal now to see a Muslim woman wearing hijab on TV like in Grey’s Anatomy. We’ve become more part of the landscape then we were before. 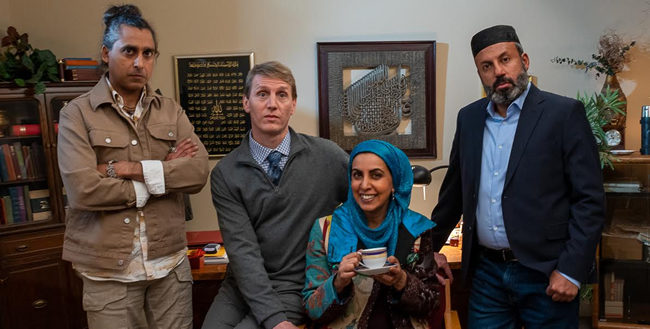 Nawaz with (left to right) cast members Anand Rajaram, Rob van Meenen, and Rizwan Manji on the set of her comedy series Zarqa.

Okay, back to your book. I’ve read that you began this book in 2014. Why did it take so long to write (if it did)? And how did the early versions of the story compare to the final product? Did you end up writing the story you originally conceived?

I think my weakness as a writer is also my strength. I’m good at plotting and coming up with zany storylines, but I need to take more time to develop character, a character arc, and emotional growth. It took me time to sort out the reason Jameela was so angry at the world, what her loss was, and how it was affecting how she saw the world. Once I figured that part out, the story started to grow and become deeper. Also, there was too much background history, which needed weeding out.

What was your experience finding an agent for this work? Then an editor?

I always had a wonderful agent, Samantha Haywood of Transatlantic Agency. The challenge was finding a publisher. The publisher for my memoir in Canada, HarperCollins, turned the book down, so I took a few years to re-write it, and it was worth it. When Samantha took it out the second time, it was bought right away by publishers in both Canada and the US.

Do you have plans to adapt JAMEELA into a TV or film project? You’re a producer; I bet you’ve already written the teleplay, right?

I’d like to adapt JAMEELA for television. I’ve been busy producing a CBC web series entitled ZARQA, which will air on CBC Gem in May. Because the book has to do with Muslims and terrorism, I’m trying to figure out how to produce it without promoting the same tropes that the book is trying to dismantle.