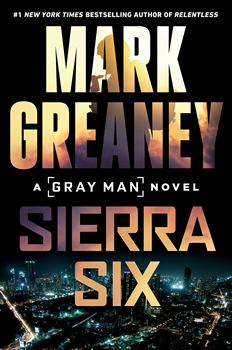 SIERRA SIX is the 11th book in Mark Greaney’s bestselling Gray Man series, but in some ways it’s the first too. Because Greaney tells two stories here: one set in present day about Court Gentry aka the Gray Man’s hunt for an international terrorist, and the other about Gentry’s beginnings as Sierra Six, the junior member of a CIA team 12 years earlier.

Gentry—a shadowy international intelligence operative and paid assassin who nevertheless operates under his own moral code—is on what he thinks is a simple job when he sees a ghost: a long-dead terrorist from his first mission with the CIA who is somehow still alive. Switching seamlessly between past and present, Greaney flashes back to a young Court Gentry before he became the Gray Man to explain why Gentry is so obsessed with finally bringing the terrorist leader to justice.

“I see it as two books interwoven as one,” Greaney says. “In one of the timelines, he’s a young man. Then at the present time he’s a freelance asset, when he finds something that links him to what happened 12 years ago. Every chapter that takes part in the past tells something about the present.”

Greaney says he loved writing this kind of book—with alternating timelines—but that it was also a challenge for him as an author. 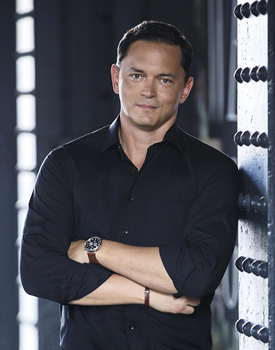 “It was definitely fun to write Court as a younger man. He was more cocky and more confident. But it was hard too. Keeping two storylines in your head is always tough. Everything has to be in the right position for maximum impact in the story. The beat…those emotional beats…that’s super tough. I’m not the most organized of people. Most of this just resides in my head until I get it down on paper.

The biggest news about Greaney’s Gray Man—besides the release of this new book—is that he’s being turned into a highly-anticipated movie that will come out on Netflix later this year. The Gray Man film stars Ryan Gosling as Court Gentry, and Chris Evans.

Greaney is happy, of course, about Court Gentry making his first screen appearance—but says it took him a long time to realize this was actually happening!

“I love the script, they did such a great job. But it was first optioned in 2009. After that, I built up a wall over the whole Hollywood thing,” he says. “I heard Ryan Gosling was interested, but I’d heard so many names it didn’t get my blood pressure up. It wasn’t until I saw pictures of them on the set shooting that I really believed it.” 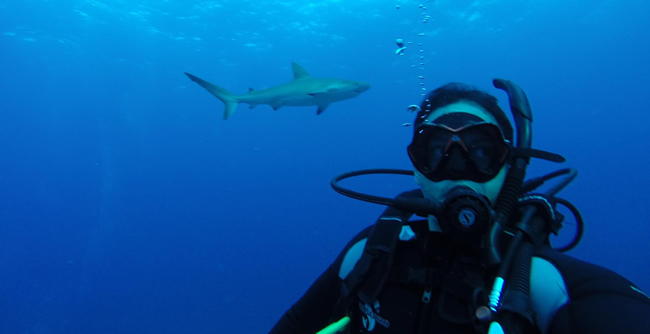 Greaney scuba dives in the Bahamas in 2020.

So does Gosling fit Greaney’s image of what Court Gentry is really like as the Gray Man?

“I never really fill in faces for characters,” he says with a laugh. “I never see their eyes, nose, and mouth. I love Ryan Gosling, I love that he can be an understated actor. I was thrilled that he’d been chosen, and everything I’ve seen from the set shows he totally embodies the character so well.”

How much of the plot for SIERRA SIX—and the other Gray Man novels—is ripped from real-life world headlines? 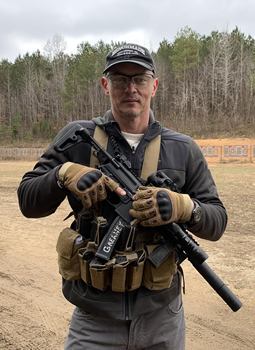 To research his Gray Man and Jack Ryan books, Greaney has trained extensively in firearms, battlefield medicine, and combat tactics. Here he is during firearms training in 2019 in Tennessee.

“I would say some of the other books are more ripped from headlines. The last book was about an Iranian general being assassinated. And that came right out of the news. This is more of a personal quest for the hero.”

But Greaney says he did study a lot about Pakistan intelligence services, organized crime in India, and the war in Afghanistan for SIERRA SIX. “It’s all basically stuff maybe not in the headlines but based in reality. Everything here is based on some sort of truth, until you get to the fictionalized terror group and the fictionalized CIA.”

Greaney does a tremendous amount of research for his books—specifically involving military training. He’s visited numerous locations around the world where the books are set, trained in firearms and sniper tactics, learned how to scuba dive and be a stunt driver, flew in the back seat of an F-18, been on a destroyer, and observed activities at many military bases. But he says all this research is simply a part of his writing process.

“I do most of my research at the same time I’m writing. I come up with a general idea, then I research it along the way. If I had to plot out a story and do all my research before writing, I probably would never get done. I give a book six months and throw in the kitchen sink and whatever I can do in that time period.” 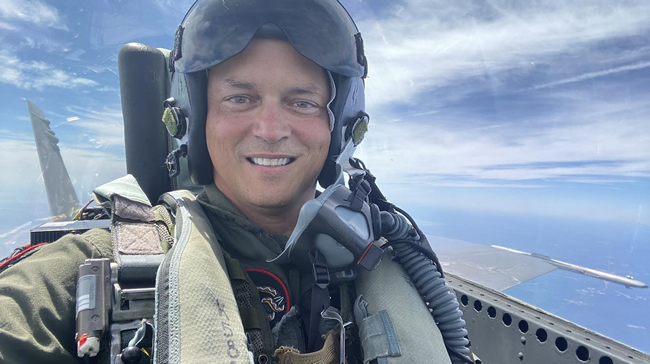 Greaney flies back seat in an F-18 with the US Navy Reserve in New Orleans.

He also says he doesn’t necessarily know where the story—or Court Gentry—are going to go in a book until he writes it.

“With every character, I will be writing dialogue between characters, and I’ll see an opportunity of building tension between two people who aren’t adversaries. Once you start writing, I think that taps into a different part of your brain, and you’re able to be creative. I have a sloppier process than some other authors, but it works for me.”

For newcomers to the Gray Man series, Greaney describes Court Gentry in this way: “He’s a former CIA operative who was burned by his masters at the CIA and went on the run and became a freelance assassin. But he only took jobs he found to be righteous. Later, he reestablished a sort of relationship with the CIA. I consider him a hero with a lot of skills, but also a lot of vulnerability. He’s not just a lantern-jawed square tough guy; he’s more like an everyman who has picked up these certain sets of skills and is just trying to get through everything by the skin of his teeth.

“It’s really important to keep him a sympathetic character. He has the great martial skills and all this training. But he considers himself a good man, and he only wants to use these skills for good causes. He operates on his own moral code. He’s sort of shackled to this moral compass he has. That’s the fun part of writing a book like this.” 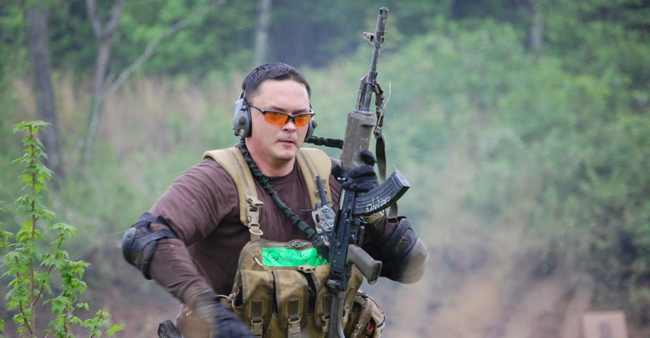 Greaney during a 2010 firearms training exercise in Tennessee

There’s a fascinating story about how Greaney came up with the idea for the Gray Man character.

“I was desperately trying to come up with a story, and I was in a bar in El Salvador. There was an American sitting there. He had a hard edge. I just came up with the idea that he was down there lying low, and he was a CIA officer off the grid. That he was a private assassin,” Greaney says. “I did all this over two beers.”

He has no idea who that man was or what he did. “I never spoke to him,” he says. But at that exact moment, Court Gentry, the Gray Man, was born.

Greaney is the author of other hugely popular books besides the Gray Man series. He wrote seven Thomas Clancy thrillers, three with Clancy and four more after Clancy’s death in 2013. His last non-Gray Man novel, Red Metal in 2019, was a New York Times bestseller. This summer, he will release a standalone novel called Armored.

Meanwhile, he’s already planning the 12th Gray Man book—which will come out in 2023. What’s next for Court Gentry in that one? “The working title is Burner,” Greaney says. “It takes place in Switzerland and the Caribbean and Las Vegas.”