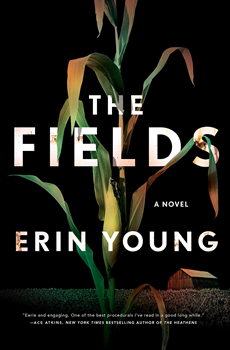 You’d think the first time British author Erin Young tried setting a novel in America would be a steep climb. Not only did she have to immerse herself in a foreign culture, but she had to erase any hint of a struggle to write with an American accent. A resident of Brighton, England, and native of Oxford, Young proves she’s bilingual when it comes to putting words on the page, easily shifting from King’s English to Iowa dirt farmer in her new thriller THE FIELDS.

Never heard of Erin Young? Perhaps you’re familiar with Robyn Young, bestselling author of numerous British historical novels. Her shift from historical to thriller fiction, and from Robyn to Erin, started with a story she read in the British newspaper The Guardian. It concerned big agriculture, the food chain, and issues with corn, and it sparked her creative brain “like a lightning bolt.”

“I have to write this without any clue how,” she told herself at the time. After discussing it with her agent, she was determined to try contemporary fiction.

“I left my last historical novel with a cliffhanger,” she says. “I’ve got a lot of readers who are slightly annoyed with me. At some point, I’m going to have to go back and see what happens.”

But what happens in her just-released first contemporary crime novel is unique—a hybrid of sorts. The first two thirds of THE FIELDS is pure police procedural. The last third is can’t-put-it-down thriller. The breakneck speed at the end is bound to keep readers wide-eyed into the wee hours.

Young’s success with switching genres has a lot to do with her work ethic. Writing British historical novels forced her each time to create a fictional historical world. That called for a lot of historical gumshoe work she couldn’t do online. (“It’s mostly wrong, anyway,” she says.) She visited her novel’s locations, learned to fight with a sword, rode tournament horses, and tried on a suit of armor. She even tried falconry and shot an English Flintlock rifle to get the feel of her stories.

When she came to the US to research THE FIELDS, she spent half a day with an NRA instructor learning how to fire a Glock. After she put two bullets through the same hole in the target, the impressed instructor turned to Young’s partner, Lee, and said, “Son, if she ever tells you to do the wash, do it.”

The Guardian article specifically discussed frightening issues with big business and growing corn. So she googled the biggest producer of corn in the world, and Iowa rose to the top.

She hopped on a plane for a two-week sojourn. Lee photographed and drove while she took notes and interviewed the locals in restaurants and bars, on park benches, in gas stations, convenience stores, at a baseball game, and at the famed Iowa State Fair. She took note of everything—people’s appearance, language, crops, houses, barns, silos, and the surrounding geography. She even read books on local flowers. All of it makes an appearance in THE FIELDS.

Her protagonist, Sergeant Riley Fisher, is head of investigations for the Black Hawk County Sheriff’s Department when a childhood friend tied to a dark moment in Fisher’s past is found dead among the corn stalks. As the plot progresses and more bodies turn up, you learn what makes Iowa tick: agriculture, the state fair, small towns, and decent folk. But there are mysteries out there in the never-ending fields of organic gold.

Fisher faces the typical sexism in the workplace, which makes it more difficult to solve the crimes as small-town folk fear there may be a serial killer in their midst. So what’s really behind the killings?

Riley is haunted not only by a mysterious stranger, but by her somewhat sordid past. She fights with her boss, deals with her ne’er-do-well brother, tries to save her niece, and fights off advances from a colleague. Fisher is determined to not only solve the crimes but to prove she deserves being named head of investigations.

Young’s mastery of finding the flavor and tone of her setting in rural Iowa makes you wonder if she really is British. There are only two words in the entire novel that hint at a British heritage. The only other British thriller writer who does this as well is Lee Child, Jack Reacher’s alter ego, who no longer must hop a plane to visit the US since he’s lived in the States for decades.

British writers have had a tough go of it trying to break into the US crime market in a big way. But that’s because, says England’s top thriller writer Peter James, American readers are not familiar with the slang and terminology of British law enforcement.

Young, like Child, however, has turned this issue on its head by instead writing about American law enforcement with no hint she’s a British writer. Young says it wasn’t easy. Trying to discern jurisdictional differences between American and British law enforcement was mind-boggling, she admits. In Great Britain, the police handle everything, she says. But in the US, Young had to figure out who oversaw what. Was it the local sheriff, the city police, state police, or the FBI? All appear in THE FIELDS in their proper roles, with their proper jurisdictions and their familiar inter-agency prejudices. She manages it all well, and you’d never know she hadn’t dealt with American law enforcement before.

“I read a lot of books on criminology,” she says. “I wanted to nail it if I could. I don’t know if it’s because I did spend so much time writing historical fiction. I had to do so much research about a place I wasn’t familiar with.”

Growing up, Young’s best subject was English, and she thought she wanted to be a music journalist. She even tried her hand at it in high school and while getting her degree at Exeter College.

“I was amazed by Shakespeare, confounded by Chaucer, and drank too much beer,” she says. She admits she still drinks too much beer.

During summer breaks, she would follow touring bands and ended up helping to organize music festivals and concerts. But at 22, she thought she should settle down, make some real money, and have a career. She tried her hand at financial consulting, even though she hated math.

After seven months, she started to write and later entered Sussex University to earn a master’s in creative writing. A 350,000-word novel was the first result. “Vomiting words,” she describes it. It sits hidden away from the rest of her creative genius.

While at Sussex, she began writing historical fiction, which fared a bit better. Brethren took seven years from start to publication before becoming an instant bestseller and later a bestselling trilogy. It remained on the Sunday Times top 10 for five weeks and hit The New York Times top 20. The German newspaper Bild named it book of the year. In 2007, she was named one of Waterstones’ 25 “Authors of the Future.”

Her protean worlds of fiction work well for Young. Whether she’s using Robyn to promote her historical fiction or Erin to brand her new American crime novels (she’s working on an Iowa sequel), Young has proven she’s versatile with genres as well as pseudonyms.

And really, what’s in a name? A rose by any other…well, you get the gist and so do those college lovers of Shakespeare, Erin and Robyn. (Or is it Robyn and Erin?)

“I just wanted my anonymity,” Young says. “Robyn and Erin were names my parents were going to call me.”

Instead, they settled on…

Riley Fisher may have to solve that mystery. So you’ll likely have to visit Iowa again to figure that one out.

On the Cover: Lara Elena Donnelly by Mindy Carlson