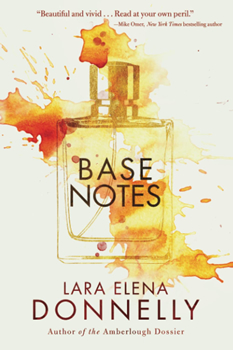 BASE NOTES reads like a confession. Our murderer is the narrator, explaining not only the “howdunit” of the crime but also pleading for our understanding. Almost for our forgiveness.

Vic Fowler, our hero(?), is a Nose. In the perfume world, a Nose is an individual who can find just the right scent to create a mood, a vibe, a feeling. And in this book, a memory of a person, a moment, a dream. When we meet the androgynous character Vic, they are disposing of a body. An auspicious start to a book that literally and figuratively reeks of murder.

And yet, we are drawn to Vic, a former Midwesterner who never fit in and is trying to prove themselves equal to the rich and hoity of the New York elite. Polished, scrappy, elegant, and hungry. It’s what draws Vic’s friends to them. With every step they take towards success, a rich person blocks their way. Actually reveling in blocking their way into the club of the elite. It’s the anger at the unfairness of their American Dreams being always one step out of reach that turns them from friends to co-conspirators…to entirely something else.

Thrillingly messy, dark, intriguing, and unexpected, BASE NOTES welcomed me into the high society of perfume before locking the door behind me and trapping me in a world of desperation and immorality.

The Big Thrill had the privilege of sitting down with Lara Elena Donnelly, where she spoke with us about the power of scent to revive memories, the fascinating Vic Fowler, and hints about her next enthralling book.

Because this book is written in first person, Vic Fowler tells us what they want us to know about them. How would you describe Vic? 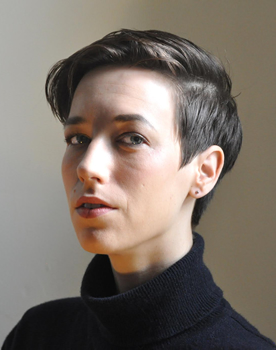 Despite talking a big game about taste and discernment and superiority, Vic is profoundly graceless and unsuave. In fact, I would say anxious, verging on hysterical, all of it coming out as hostility, arrogance, and neuroses. Broke, catty, exacting. Unrealistic and unforgiving of faults. In short: a hot mess!

Vic has bought into the hype though and would never identify that way. At least not as a mess. Maybe as “exacting” and even “broke.” Possibly Vic would claim “catty” and “hostile” as well. But from a position of pride, rather than negativity. I suspect Vic takes a lot of pleasure in being petty, spiteful, and generally mean, even if most of that is held inside, shared only with the reader. Vic can’t afford to let it all out in the world of the novel—only on the page, through internal monologue. I hope that for the length of the book, readers can indulge in that same wicked pleasure. Like sitting down to really get bitchy with a friend.

How did Patrick Süskind’s novel Perfume: The Story of a Murderer influence your book? How are Perfume’s central character Grenouille and Vic similar or different?

I actually had not read Süskind when I started the short story that would become BASE NOTES. I had only heard about it and gotten the gist of the plot. But I guess that secondhand summary really stuck with me for years afterward. I didn’t know anything about Grenouille as a character when I first conceived of Vic. 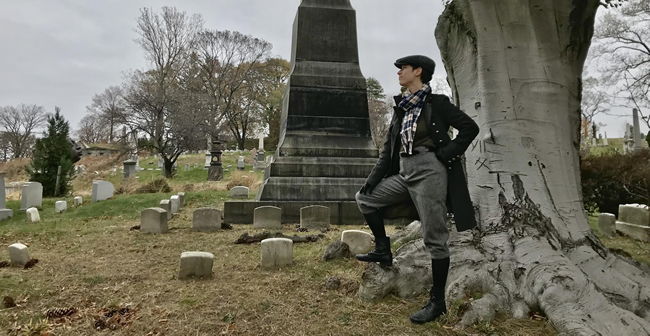 I did read Perfume as I was drafting the story, and even snuck a reference in, but I’m not sure how much it influenced the text beyond giving me interesting avenues for technical research. Grenouille and Vic share an obsessiveness, I think, and are obviously weird and amoral enough that they both decided to test what would happen if they made perfume out of people. But beyond that, where Grenouille is single-minded and almost monastic in his focus and isolation, Vic is worldly. Vic cares about creating incredible scents but also about recognition, proving something, living comfortably, and even about human companionship (albeit in a pretty twisted way).

This book clearly required in-depth research on perfume creation methods, the structure of scents that go into creating a complex perfume along with the ingredients needed to form the layers of the perfume. The details and imagery are incredible. What was it like to research the perfume industry, and how did you go about learning how to create the formulas that lead each chapter? 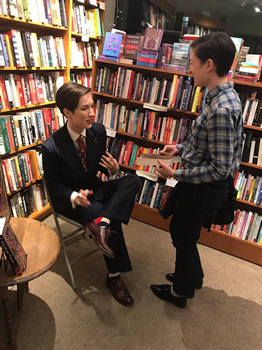 Donnelly at a launch event for her 2019 novel Amnesty

I am honestly terrified that I have gotten all of the science and the business incorrect, despite so much help from so many quarters! But this is not a technical manual on how to become a perfumer or a business plan for how to start a niche fragrance line. It’s a psychological thriller. Everything was bent and bruised and manipulated in service to the story, including the research.

I did solicit advice from several indie perfumers (big thanks go out especially to Chris Rusak of Chris Rusak and Carter Weeks Maddox of Chronotope) on some of the technical and economic details and spent a lot of time on Internet forums frequented by home hobbyists experimenting with stills, tinctures, and mixing. I have a friend who used to be a pathologist who was very helpful with the gruesome chemistry of tincturing a human body.

The Diary of a Nose by Jean-Claude Ellena was so helpful in writing this book that it got a mention in the text as one of Vic’s comfort reads (it also gets a nod when Vic describes a certain chemical combination that creates the scent of pears, which is in fact Ellena’s pear accord). Chandler Burr’s The Emperor of Scent was also a great resource. And I always end up mentioning Jude Doyle’s “My quest to find the great American perfume” which is the article in The Guardian that inspired the short story that became the book. 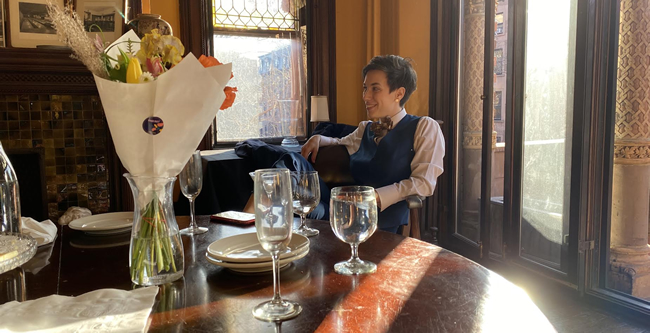 The interpersonal connections that Vic makes with others are unexpectedly strong for someone with such a dark secret to hide. Even Vic seems surprised to be included by Beau, Jane, and Giovanni in their group. Why do you think this group is drawn to Vic?

Oh, this is such a chewy question! I think when writing in first person, or even close third, the motivations of secondary and tertiary characters are really valuable but can be difficult to convey. Often, they present excellent solutions to issues with the primary character or problems with the plot, but I also think they’re not necessarily an author’s go-to when these problems arise. It’s always such a delightful surprise when I remember that I can dig into secondary character motivations as a resource.

Jane here is the easy one: In Vic, she sees herself. Ruthless, singularly focused, driven, ready to sacrifice anything for art. Jane wants to be Vic because Vic made the choice that Jane didn’t: Vic never sold out for a salary. Jane is closest to giving up on the relationship when Vic evinces remorse or indecision; that’s not something she wants to hear. Her fantasy for herself doesn’t include any wavering. 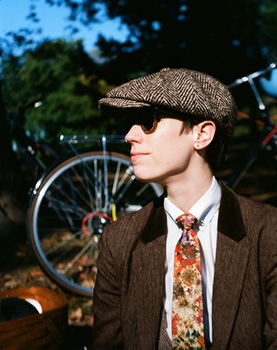 Because Jane likes Vic, Beau is willing to take a chance. He is probably fascinated with Vic for many of the same reasons he’s attracted to Jane. He’s the kind of person who makes snap judgments about people and sticks with those judgments until proven wrong; in this case the judgment is positive and remains so far longer than it should. I think he also likes people he perceives to be on his team: in this case, another tasteful but skint purveyor of luxuries who could spend a wealthy client’s money far better than that client could.

Giovanni is a case of right time, right place. He and Vic have known each other for a while, but not closely. He thinks Vic is weird but funny, maybe a kind of curiosity. Then Vic says just the right words to him when he’s in the right frame of mind, when he really needs validation. Giovanni usually deals with his own problems and is proud of it; I’m not sure he realized how badly he wanted some sympathy, wanted somebody to say, “I know. It really sucks, doesn’t it?” And on this single interaction hangs the introduction to Jane, and thence to Beau. Giovanni pushed just a hair too far, and Vic in just the right kind of bad mood…. It’s the kind of scenario the four of them posit together, when discussing the theoretical murders of bad tippers, rude customers, and frustrating clients. The right set of circumstances setting off a chain reaction. 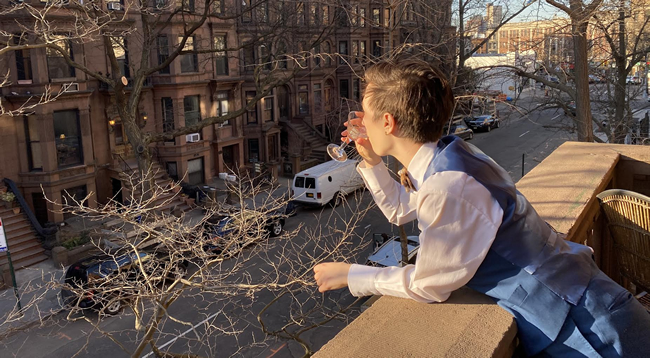 Donnelly on the balcony at the Montauk Club. Photo credit: Eliot Routh.

The reading experience is going to be totally different, I think—different style, different genre, more ambitious formal conceit (that I hope I managed to pull off), and less sympathetic characters (which is saying something, since Amberlough’s leading men are a narcotics lord and a fascist collaborator).

The smaller, superficial similarities between the Dossier and BASE NOTES are all about how much I love to write food, wine, sex, clothes, setting, and perfume. Close readers will notice there are a lot of smells in the Dossier. 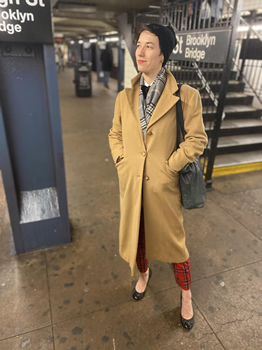 The biggest similarities lie in the juxtaposition of wealth and poverty and the characters’ willingness to do whatever it takes to get ahead. Also in the characters’ manipulation of situations and each other—in the Dossier, everyone is highly attuned to what everyone else has to lose and to gain from any given situation and uses that knowledge with very few scruples. Vic is similarly observant, resourceful, and unscrupulous, and there are other characters pulling their own strings (Jane leveraging Beau’s guilt, Eisner squeezing Vic).

Manipulation is something I think about a lot, which tends to crop up in my writing. We tend to cast it as a great emotional evil, but it’s a skill many rely on to get what they want in small ways. I think everyone uses other people’s feelings pretty often, at least a little bit. It’s a game of push and pull we all play together, and I find the mechanics to be rich ground for growing stories.

What can you tell us about your next project?

Nothing is set in stone right now, but the pages notes that I hope will coalesce into my next project amount to a Tam Lin retelling set in contemporary New York City, casting a multinational consulting firm as the fairy court and a couple of striving millennials as Janet and the titular knight. Then again, there are a couple of things on the back burners that might get bumped up. We’ll see!