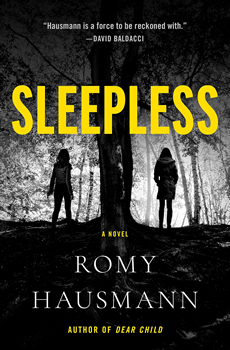 “I hate to tell a storyline straight from A to B,” says thriller author Romy Hausmann. “That bores me.”

And indeed, her latest release, SLEEPLESS, is anything but straightforward. Past and present collide in this haunting novel of guilt and retribution. As for boredom, that’s unlikely for readers who will quickly become absorbed in the unfolding narrative.

We hear from Nadja Kulka, convicted of a terrible crime when still a child and now living a reformed life as an assistant to a criminal lawyer—until the lawyer’s wife asks her to help dispose of a body. Then we are brought back five years to the story of Nelly Schütt, a young woman working at a country inn and seemingly unconnected to Nadja. Anonymous letters to a loved one make up the third thread.

Reader loyalties may shift as the story unfolds, and this is precisely what Hausmann intended. “The older I get, the more my view of the world changes,” she says. “I realize that principles such as morality, truth, or loyalty are not set values, but are defined by our individual perspective. There is seldom a black or white, a right or wrong. Objectively, wrong behavior can happen for the right reasons and vice versa.”

With a plot as complex as SLEEPLESS, one might expect that Hausmann had a detailed plan for keeping everything on track, but her approach is more organic. She starts with the basic question and a rough idea, then lets her characters take over. “You could say that I consciously maneuver them into a situation and then watch them come out again. It works very well for me, but it still takes me a long time to write a novel. Not because of the story itself, but rather because of the narrative.”

Whenever she feels stuck, she checks back, returning to her hook to continue to provide the story’s drive. “If that doesn’t work,” she says, “I’ll take a nap. I’ve already solved a lot of problems while half asleep, and sometimes the head is just tired and you become blind to the problem you’re trying to solve as a result of that.”

Hausmann admits that she found writing SLEEPLESS difficult at times. This was in part due to the huge international success of Dear Child, her previous novel, which had been her debut. Many writers talk of second novels being challenging, and Hausmann agrees.

“To write a second book after an initial success is very hard,” she says. “Maybe it’s not even so much the pressure from outside as the pressure you put on yourself. You don’t want to disappoint anyone, and you also want to prove that you weren’t just lucky with the first book. The fact is that it takes away a lot of freedom.”

To counteract those pressures, Hausmann made a conscious decision to return to what made her love writing.

“For over ten years I have been writing stories just for myself and in the way I like them personally—not to meet anyone else’s expectations or for money,” she says. “I think that’s always been my big plus: I write for the sake of writing. Only if I continue to approach my stories in this way will I be true to myself and be proud of myself. And that was exactly my most important lesson: I have to continue to go my own way and accept that my books polarize. And that’s what’s most important to me, when I can tell myself that I wrote exactly the book I wanted to write, with all my heart, passion, and all the pain that one goes through as a writer.”

Her creative talents extend beyond writing. Hausmann has had a career in film editing. It shows in her latest novel, which is visually powerful. “I only think in terms of emotions and images. And the latter is definitely due to my past in television, yes. For me personally, a good book is exactly that: a film in your head.”

That love of film finds expression in the character of Nelly, who also loves classic black-and-white films such as The Woman in the Window and Kiss of Death. “I’m a big fan of the old movies,” says Hausmann. “In spite of the few technical means available at the time, they are, in my opinion, better told than much of what we watch today. There is psychological depth and the time for a character’s development. You don’t need any complex special effects and trust the audience to do a bit of their own analysis. Personally, as a viewer (or reader), I don’t want everything to be explained, I like to be challenged a little. I think you can apply that to my stories. What can an author learn from them? To take care of your characters and not to write stereotyped characters. An interesting person and their development sometimes make more of an impression than the third liter of blood that is spilled on page 20.”

SLEEPLESS is of course translated from the German original, Marta Schläft. From a reader’s perspective, translator Jamie Bulloch has done a wonderful job, with the prose smooth and powerfully descriptive. Hausmann is grateful for his creative input. “I love Jamie! We are in contact every now and then, but rarely have to coordinate, because he has an incredible sense for my texts. He just feels what you have to feel in order to pass on my stories.”

Now that Hausmann has that difficult second novel out of the way, she’s looking forward to her third’s release. “I’ve just finished my third thriller, which will be out in Germany in January. I’m very satisfied with this book, and I can’t wait to introduce it to my readers and discuss it with them. I also hope that I will be able to travel abroad.”

That’s a hope many will share with Hausmann. That her books have already traveled the world is something she hugely appreciates.

“The fact that, as a German author, I have been published in so many countries—and above all have found such great readers there—makes me incredibly happy,” she says. “I would never have dreamed that, and I still can’t believe it. Therefore, at this point, thank you again to all of my readers. Your wonderful support means everything to me.”