Returning to Espionage and Murder in 18th Century England 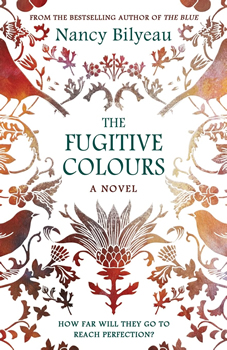 Back in 2018, historical thriller and suspense author Nancy Bilyeau published The Blue, a twisty tale of industrial espionage set in 18th century England. Its protagonist was Genevieve Planché, a young artist caught up in the world of porcelain production, a commodity upon which fortunes were made and lost with deadly consequences.

Bilyeau had earlier written a successful series set in Tudor England featuring Dominican novice Joanna Stafford, so the shifts in time period and subject matter were considerable. She also intended another change: The Blue was to be a standalone novel.

To Bilyeau’s surprise, Genevieve Planché’s intriguing story took off. “The book sold out right away,” she says. “People were tracking me down on LinkedIn and pleading, saying they needed my help in getting a copy of the paperback for their wife’s present!”

In the meantime, the time-traveling Bilyeau was headed off elsewhere.  “I have,” she admits, “been gently chided by a couple of my historical fiction peers for my jumping around!” Her destination was early 20th century New York, with the publication of her successful novels Dreamland and The Ghost of Madison Avenue the result. Bilyeau puts her approach down to her professional background. “I think it’s because it’s not what you usually have in fiction. I was a newspaper writer and then a magazine writer and editor and following that, I got into screenwriting. All of this happened before I wrote my first novel. In those mediums, you really jump around with time, type of character, and scope of story.  So that’s what I’m used to.”

Yet Genevieve Planché wouldn’t leave her alone. “I still wasn’t thinking of a sequel until a couple of years ago. I read something about all the rivalries and tensions among the painters in London in the mid-18th century, and I thought it could be interesting to plunge Genevieve, herself a painter, into that world. The Blue begins with a hint of it at William Hogarth’s Christmas Party—the party she crashes—but then I whisked Genevieve away. I thought it would be interesting to return to that.”

So return she did, and the result is THE FUGITIVE COLOURS, a suspenseful story of silk weavers, painters, spies, and murder. As for the title, Bilyeau doesn’t want to give anything away. “While the phrase has a thriller tinge, and I do write suspense, it’s also a real phrase that describes something interesting that happens in painting. I don’t want to spoil anything, so I’ll say no more.”

Readers will be delighted to meet up with Genevieve Planché once again. She’s as clever, talented, courageous, and resourceful as ever. Yet, being true to her time, she is often frustrated by the societal and economic constraints women face. Bilyeau acknowledges the constraints that the real history can place on her work.

“It’s difficult because women had so many limits and prejudices affecting them in past centuries. They didn’t have freedom of movement like men,” she says. “But some women did break free of those constraints—we know they did through the historical record—and if you’re creative, your characters can do it in your fiction without everyone protesting too much that you’re cheating.” Bilyeau hasn’t only faced that dilemma with Genevieve.  “In my Joanna Stafford trilogy, I managed to take a nun in an enclosed order of Dominican sisters and propel her into the middle of the action. Nothing can be harder than that! Sometimes it’s a matter of really thinking things through while doing the research. What would it take to move your character from A to B?”

While Bilyeau’s is of course a fictional story, the complex, interacting threads in the novel are real. London in the 1760s had ambitious painters coming to prominence and often in stiff competition with each other. The Seven Years War meant that spies were a real and present threat. The Huguenot silk-weaving community in Spitalfields were the subject of hostility and suspicion, despite their enormous talent. The early chemists, the “natural philosophers” of the time, were of emerging interest and yet another group of whom many were suspicious. Bilyeau handles all these major intersecting themes with a remarkable attention to research. And she doesn’t miss the minutiae either: polluted air, the type of tea Genevieve likes to drink, how painting with watercolors is different than oils, the interior of the 18th century Bow Street magistrate’s court—even the red vests of the magistrate’s officials.

Bilyeau explains that, while requiring many, many hours, her deep dives into a historical period are a labor of love for her. “It’s delicious fun to dig up these nuggets that will make a novel richer and more interesting. I was flattered when someone who read THE FUGITIVE COLOURS and didn’t know much about 18th century England said she had to stop reading to jump into side research: ‘Is this person real?’ ‘Is that true?’ ‘This is so wild, is it based on facts?’ The kind of reader who enjoys learning little-known facts about a different time and place—and feeling immersed in this world while following the story—that is my person!”

Part of the joy for Bilyeau is in making unexpected discoveries. “To me, the most surprising revelation was how lawless 1764 London was. There was an intricate secret police force operating in Paris, but nothing like that in London. The Bow Street Runners, the forerunners of the modern police force, was just getting started. There were less than twelve of them in a city of three quarters of a million. Their headquarters was in Covent Garden, which had a lot of poverty and crime in the 18th century. That makes sense, to be near the ‘action.’ But the Bow Street Runners was such a weak force, a brothel was flagrantly open for business on the same block. And when an arrest was made and they needed to detain the person, they had to use some spare rooms in the tavern across the street.”

But alongside that joy in research came terrible grief for Bilyeau. She wrote this novel during the global COVID-19 pandemic. Some writers have discussed how writing during this period robbed them of creativity, and others have said it was a welcome relief to escape into their fictional world. For Bilyeau, it was a time of heartbreaking personal tragedy. Her mother died of COVID on May 4, 2020, and Bilyeau says that sorrow “weighed me down.”

Yet where many would have not been able to continue, she persisted. “I had a contract to write the book, so that really helped me with motivation. Otherwise, I’m not sure I would have stayed on track. What always comes to my rescue is the fact that I’m a longtime editor. So if I can get something on the page, that’s a triumph, because I know I can improve it in the editing.”

Such resilience has paid off. “My publisher is happy with THE FUGITIVE COLOURS and wants more books. I signed a two-book contract for a third Genevieve book and another novel, this one set in NYC in the 1920s.”

Earlier I described Genevieve Planché as clever, talented, courageous, and resourceful. Reader, that is also the author, Nancy Bilyeau.

Between the Lines: David Yoon