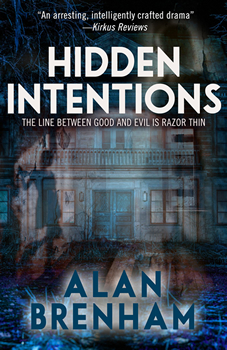 A teenager sneaks into an abandoned house on a dare, but her mission goes sideways. Bound and whisked away, she relies on her own resourcefulness to find ways to survive. She escapes, but her kidnappers are close on her heels. Her father must make an impossible choice—his daughter’s life or that of another.

Her mother chooses a different way.

“The line between good and evil is razor thin,” Alan Brenham writes on his website, evoking the “thin red line” of the Crimean War and Kipling’s Tommy.

“It means that good people sometimes lose their individual ‘code of honor’ in times of overwhelming stress,” Brenham says. “In HIDDEN INTENTIONS, the quote applies to the concealed /revealed intent of one or more of the characters who otherwise were good people. In HIDDEN INTENTIONS, the kidnapped girl’s father is faced with a choice—his daughter’s life or his brother’s life, and the girl’s mother decides to do whatever it takes.”

The core theme in HIDDEN INTENTIONS is family.

“A father’s love for and duty to protect his child; a brother’s loyalty to and love for his sibling,” Brenham says. However, family is not a serial theme in his fiction, as each story is structured over its own ethos.

“Depending on the particular story, there are different themes in my other books.”

That said, the thread of a moral order runs through his works, “influenced by a value system instilled by (Alan’s) parents and grandparents.” The moral order of HIDDEN INTENTIONS reveals two distinct characteristics.

“A father is charged by society and expected to protect his child from danger and ensure her safety” and “Because siblings share a close, personal relationship, a brother is willing to do whatever it takes to help, support, and defend his sibling whenever possible.”

Brenham’s writing upholds the thriller as an entertaining form which enhances the processing of social and relational themes for a wider audience.

Brenham is actually the pseudonym of Alan Behr. When Alan Behr finished his first story, he “discovered … another Alan Behr who was also an attorney and an author living in New York.”

Following his “undergraduate degree … from Texas A&I University,” Brenham joined the Treasury Department as a law enforcement officer, and after 14 years of service, obtained his “law degree.”

“… while serving as a special agent with (the) US Treasury,” Alan Brenham was “temporarily commissioned as a Special Deputy US Marshal to … protect passengers and aircraft from hijacking.”

He also taught “criminal justice classes to US Army and US Air Force personnel stationed in West Berlin, during the time the city was “divided” and carried “a special type of military ID.”

Like many writers, Brenham grew up on books, dreaming of being part of the creative process. Just as Winston Churchill’s military field sketches blossomed into paintings, Alan’s reports as a “law enforcement officer/investigator and an attorney” eventually bloomed into full-blown novels.

The “starter pistol that actually got me into writing fiction was David Baldacci(’s) Total Control,” which Brenham says he read “during a Caribbean cruise.”

His “writing style has evolved… into proceeding from setting to plot and character. The very first story I wrote, which is now buried in the bottom of a box in the garage, focused solely on plot.”

He believes that setting, plot and character “are the essential parts of any novel … They answer the who, what, when, where, and why questions readers ask.”

His active and versatile experience in different aspects of the law and its enforcement have enriched his creativity with a unique view of human nature bared under pressure—an enviable resource for writing thrillers.

As a US Customs Special Agent, he was trained by the Secret Service in “dignitary protection, defensive tactics, and firearms.” He went on to earn “an Expert Marksman badge in law enforcement and won a gold medal at the US Army International Pistol Competition in Berlin.”

Asked if he had a relevant remark about gun control he might wish to share with readers, he says, “I believe in the Second Amendment but hope that sensible laws are passed that require users to undergo weapons training and a background check. Users need to realize that emotions and alcohol and guns don’t mix. As a police officer, I’ve seen firsthand the end result of the damage caused by an emotionally distraught individual or an intoxicated person using a firearm.”

Considering his hands-on background, it is no surprise that he isn’t hostage to a specific working environment. “Not really. As long as I have a room or an office where I research and write my stories, I’m good to go.”

Neither is his spare time filled with challenging hobbies, but down-to-earth interests: “In order of importance, I help my wife with the honey-do list; read books; watch TV movies and The Walking Dead TV series; and watch football in season.”

This straightforward Texan’s writing walks his readers through the dark places on the razor’s edge between good and evil to recognize and reach for the light within them.

“Each of us has a vision of good and of evil. We have to encourage people to move towards what they think is good… Everyone has his own idea of good and evil and must choose to follow the good and fight evil as he conceives them. That would be enough to make the world a better place—” Pope Francis.

After graduating from college, Alan spent several years as a criminal investigator before earning a law degree, working first as a prosecutor then as a defense attorney for over twenty years. His professional travels for the US Government took him to several European and Middle Eastern countries. While contracted to the US Army, he resided in Berlin, Germany, for a few years. Under the pen name of Alan Brenham, he’s published five crime fiction novels with Black Opal Books. Alan and his wife, Lt. Colonel Lillian (LTC, Ret., US Army), currently live in the Austin, Texas area.