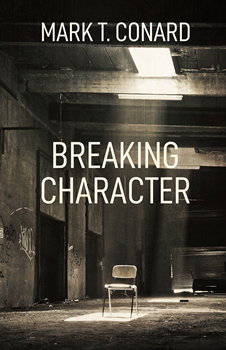 BREAKING CHARACTER is Mark T. Conard’s third thriller, following Dark as Night and A Killer’s Coda. His writing has been well received by peers Tod Goldberg, Scott Phillips, Jennifer Jordan, Tammy Michaels, David J. Montgomery, and more, with remarks such as “damn near perfect noir,” “goes right for the jugular,” “must read,” and “sharply written.”

BREAKING CHARACTER reveals actor Paul Wilkinson in a world of hurt. The cops are sure he murdered his new girlfriend’s abusive ex, and a vicious drug dealer is after him for a batch of stolen narcotics.

Paul sees a chance to escape the heat when he’s offered the bizarre role of an eccentric billionaire’s long-lost friend. He accepts the part and takes on a new identity, allowing him to hide in plain sight while he searches for the missing drugs and the real killer.

When the trail unexpectedly leads Paul back to himself, he risks losing his identity, his freedom, and even his life to end the drama he’s been unwittingly cast in.

Conard’s methodically crafted plots usually unfold in settings that are familiar to the author. Once they take shape, he allows his characters to slither in.

“As with most of my books, the plot took shape first,” he says. “I begin to figure out the main characters as the plot is taking shape, but the plot is what I develop first. The setting generally is where I’m living at the time of the writing, so most of my books are set in New York, but some of the earlier ones are in Philly.”

Conard is drawn to writing thrillers because of their “pacing and the excitement … I like the typical economy of the writing that requires you to do something interesting and attention-grabbing in a short space and with a small number of words,” he says. “But this economy also opens up an opportunity to do something novel or subversive at the same time.” 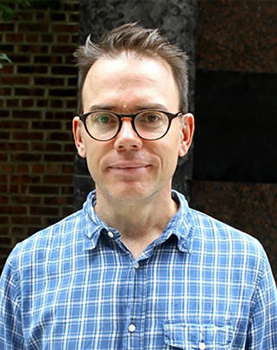 A book is a world in itself, with its unique personality composed of its temperament, its strengths, and its weaknesses. BREAKING CHARACTER is no different and presented Conard with its own set of opportunities and challenges.

“The biggest challenge was to put a new spin on the appearance/reality-confusion theme,” he says. “That’s been done a million times, so it’s easy to just copy or fall into clichés. That challenge was also the biggest opportunity, however. Once I cracked that difficulty and found a way into the plot in a novel way, then the story took off.”

BREAKING CHARACTER put Conard’s fortitude on the line, strengthening his creative endurance. “I actually learned a lot about patience, writing, and revising the book,” he says. “I’ve never been by nature a very patient person, but in the process of completing this project, I learned the value of having patience, and that lesson came with a fair amount of heartache.”

Beyond the jacket copy, previews, and reviews, “There are a number of twists and turns and false leads. If I’ve done my job right, there will be many places where you thought you knew what was happening, but you’ll discover that you didn’t. And if I really did my job right, all the pieces will fit, and you’ll be satisfied by the resolution to the story.”

When asked how writing, revising, and marketing this book changed his thinking about publishing and about his goals as a writer, he says, “It was in the process of trying to market this book that I decided to forgo the traditional route of finding an agent and publishing with a big-market publisher, and rather pursue publishing with an independent press. Luckily, having made that decision, I signed with Down & Out Books, and I’m very happy with this new direction.”

Conard hopes “readers find the book exciting, novel, and just fun. I just want them to have an enjoyable experience [and] have some true … moments of surprise and revelation.”

He admits he “started writing thrillers by accident, working on a screenplay in grad school with a friend, [with no] particular genre in mind. We came up with the outline of the plot and some character sketches, and he left it to me. I let it sit in my desk drawer for a couple of years, then decided one summer to turn it into a novel. I wrote, rewrote, edited, read in the genre (I’d never read any suspense or crime literature until I started writing it), and finally came up with a complete draft. I enjoyed the process so much that I started right away on a second one. The first one published was the fourth manuscript completed—Dark as Night, now republished.”

Conard is a meticulous plotter, collecting ideas in a notebook until they start fitting together into “the basic structure of the story…I’m obsessive … about outlining. After the writing, I do lots and lots of revising and rewriting.”

He says his “favorite authors in the genre are many of the great ones: Elmore Leonard, James Ellroy, Jim Thompson, Raymond Chandler. They influenced me simply because they’re among the best of the best in this genre. There’s hardly anyone who truly compares to these giants.”

After a long-running philosophy professorship in New York City, Conard is now a dean at one of Baltimore’s community colleges. He spends much of his free time with his two small children, practices yoga, and likes cycling, cooking, and playing the guitar—a life-long passion.