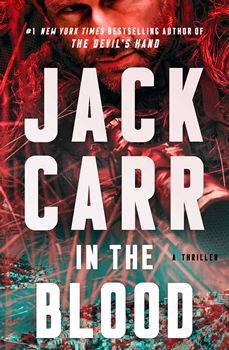 Jack Carr burst onto the writing scene in 2018 when his debut novel, The Terminal List, showed up on the “Best Of” lists for countless thriller critics and fans alike. As a 20-year member of the elite US Navy SEALs, Jack knows a thing or two about what his protagonist, James Reece, faces on the pages of the fictional tales that hit readers like a slug to the chest.

After the success of The Terminal List, three more books followed: True Believer, Savage Son, and The Devil’s Hand. Now the fifth novel in the series, IN THE BLOOD, drops this month, and Carr’s fans are still begging for more books and want to know where James Reece goes from here. So what’s up next? Jack’s first book The Terminal List was optioned by Chris Pratt (yes, Star-Lord himself) and his production company Indivisible Productions. The series filmed in 2021 and releases from Amazon Studios on July 1, 2022.

Over the years, Carr has been kind enough to appear on countless podcasts, television programs, and given print interviews with a plethora of sources. However, The Big Thrill wanted to peel back another layer of the onion and see what awaits our readers’ eyes when the Behavioral Analysis Unit gets involved. Turns out, Carr’s years as a SEAL gave him the upper hand—Carr kept his answers close to his chest and even avoided some. Coy! (We still love you, Jack!)

Home with the family, reading by the fire.

Not being there when my family needs me.

Carr behind the mic, hosting his podcast Danger Close

That question does not compute.

A Navy SEAL, but I did that for 20 years, so taking writer and SEAL off the table, I’d probably be a river guide.

We will have to see how the kids turn out. 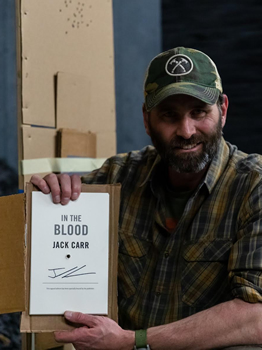 Carr displays the sold-out special edition of IN THE BLOOD that featured a title page with signature and bullet hole.

Those men and women who put it all on the line time and time again from the inception of the United States through today who gave me the ability to forge my own path.

Coffee in the morning and bourbon at night.  If I start reversing those, then I’ll know it’s time to take a vacation.

Never pay attention to the odds.