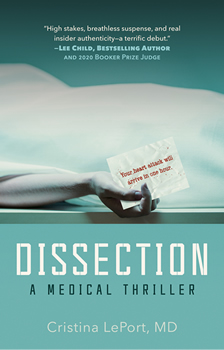 In Cristina LePort’s DISSECTION, surgeon Steven Leeds and his former lover, Dr. Silvana Moretti, are beleaguered by an onslaught of heart attack and stroke victims. What’s more disturbing is the traumatic events are caused by a rare arterial injury—a dissection. The victims receive cards that say: Your heart attack will arrive in one hour! And it does.

Private detective Kirk Miner and FBI agent Jack Mulville investigate, but they suspect Dr. Moretti herself, who harbors a grudge against the victims. The FBI thinks it’s solved the case, but this is just the beginning of an apocalyptic bioterrorism plot designed to topple the US government.

As a long-time avid fan of thrillers, LePort says, “I love the rush reading and writing thrillers gives me. I like to build plots with cliffhangers, mystery, and twists.” Relishing conspiracies and intrigue, her novels accordingly start taking shape from plot, which then demands the appropriate characters step in and take hold.

About DISSECTION, she says, “The political side required extensive research. My profession—cardiology—made the medical part a fun ride [and] I discovered a lot about the government’s policies during crises and about our vulnerability. After keeping you awake and on the edge of your seat, DISSECTION has a very satisfying end.”

LePort admits Robin Cook and Lee Child’s influence on her writing: “Robin Cook, because he is the originator of the ‘medical thriller’ category [and] Lee Child—Reacher is a real hero; no feet of clay and no apologies. A ‘monolithic’ hero without superpowers. He also starts as a regular person, but his courage, his integrity, and his unwavering commitment to justice make him a hero. 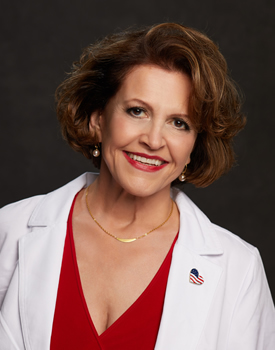 “Heroes,” she adds, “don’t necessarily have to be high-end achievers, but can be regular people who go beyond the call of duty and perform one-time heroic acts, despite their fears. This is what happens in DISSECTION.”

Asked to name any writers other than Cook and Child who might have influenced her as a child and inspired her to write, she surprisingly says, “Not during my school years. I hated writing assignments!

“One day, I started to listen to the lectures ‘The Art of Fiction’ by Ayn Rand. I decided to try writing a novel. Soon, I got addicted to the feeling of entering a world where I could make anything happen.”

And even in real life, LePort has achieved the unexpected. English is not her mother tongue, the same as Joseph Conrad, whose native language was Polish and who only started learning English at the age of 21, when he came to England. Yet she, too, writes novels that elicit peer applause.

LePort “…was 26, fresh out of medical school,” when she immigrated from Italy to the USA, “and I barely spoke English. I never expected that one day I would write novels in my second language, and I would get endorsements by famous authors such as Lee Child and Tess Gerritsen.

“While I was busy getting rejected by agents and publishers, I kept on writing. Now I have four other medical thrillers in various stages of editing, and ideas for a few more. I intend to do everything I can so they will all be published in the near future.

“Some of the characters of DISSECTION appear also in my other novels: Kirk Miner, PI, Jack Mulville, FBI. Charlotte Bloom, a minor character in DISSECTION, becomes the protagonist in a subsequent novel. Each thriller has its own unique content.”

As for what catalyzed the actual writing of DISSECTION, LePort says, “One day I saw a commercial on TV about a medication used to treat heart attacks. A man opened a card while a voice said, ‘Wouldn’t be nice if we got a notice when a heart attack is going to strike, so we can prevent it?’ I thought that was a great idea for a medical thriller.

Cristina LePort was born in Bologna, Italy. Her mother was an avid reader and a schoolteacher. Her father, an accountant who studied mathematics and astrophysics as a hobby, worshipped the USA and was instrumental in his daughter’s decision to come to this country. Cristina LePort is proud to be listed on the American immigrant wall of honor on Ellis Island in New York.

Cristina LePort splits her time between her two passions, medicine and fiction writing.
For many years, she conceived novels in the genre of medical thrillers infused with realistic clinical details and cutting-edge science.

She lives in Southern California with her husband of 37 years, Peter LePort, a general surgeon. They have three children and three grandchildren.