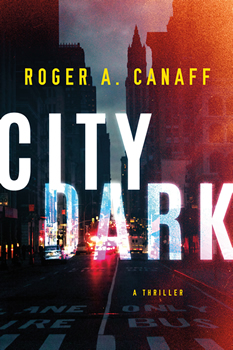 If you’ve been involved with writing at any level, the phrase “write what you know” likely conjures images of your middle school composition classes. As the information age dawned, a variation on this writer’s chestnut surfaced: “Write what you’re willing to learn.” For Roger Canaff, either version of this age-old wisdom has served him well in his publishing life.

A victim of child sexual abuse himself, Canaff’s stellar career as a child protection and anti-violence against women advocate, prosecutor, a special victims ADA in the Bronx, New York, and deputy chief with the sex offender management unit in the New York Attorney General’s Office has provided him a seemingly endless well of real-life plot lines.

Yet, he describes his newest work, CITY DARK, as a character-driven story. Of his protagonist, Joe DeSantos, Canaff says, “There are aspects of me in him. The rest of the character is an amalgam of the most interesting, smart, and just haunted [attorneys] that I knew. They were good-hearted and reckless. But they were fighting demons and unresolved hurts.”

Canaff notes that two other characters help drive his latest thriller—and he wasn’t necessarily expecting them. “They’re both New York City. One was the City of July 13, 1977, and the other the City of 2017.” He adds, “It’s not just a writer’s trick. I wanted the City as it was in its nadir, in its rock-bottom at least in the last 80 to 100 years. A city in crisis as it was. Then I wanted the City as it was today, post 9/11, to be another character. I had this dream to bring New York City alive in this dual form.”

In CITY DARK, Canaff takes on the challenge of weaving together critical narratives from today and long ago to explore the question: How do we process childhood trauma almost 40 years too late? In Joe DeSantos’s case, he believed he had enough going for him that he could escape, or maybe outrun, past traumas without having to look them in the eye. But Canaff shows us through his storytelling and real-life experiences that this only makes things worse. 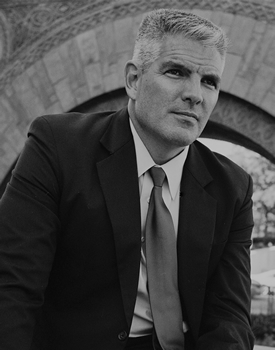 In Joe’s case, that means bingeing on the all-to-familiar alcoholic/workaholic cocktail to numb the pain. That is until the hard-charging New York ADA’s estranged mother of 40 years is found dead on a beach in Coney Island.

Four decades provide a lot of ground for cultivating a deep and compelling narrative arc for Joe, starting as a 10-year-old boy on July 13, 1977. That was a pivotal day for another character, too. New York City was plunged into a blackout that caused journalist Martin Gottlieb to later reflect in The New York Times, “New York had reached an arson-scarred, drug-infested, economically challenged nadir.”

While Canaff contrasts the characters of yesterday with what they’ve become today, he also uses CITY DARK as a stark reminder that some of the best (and worst) parts of a being don’t change through time. He notes that one of the more poignant scenes in CITY DARK is when an 18-year-old Joe visits an uncle who is dying of AIDS during a time when it was seen as an unforgivable stigma of the gay community.

“There were thousands of [gay] men, particularly in the early days of AIDS, who took on these ministerial roles as helpers and social workers—getting families through the deaths of these young men,” he says. “It’s unbelievable how much power was in that.”

Canaff explains that the experience wasn’t lost on Joe later in the story. When asked what surprised him as his protagonist came to life on the page, Canaff says, “Pretty much the entire book is Joe dealing with the consequences of his past. Even at the end, there was some tenderness about that time period. This wasn’t something [Joe] had to conquer. [He realized] there was something beautiful about it in its own right.”

Canaff attributes those moments of tenderness and, at times, resiliency in Joe DeSantos and New York City not so much to his own experience as to the survivors of abuse he has been privileged to work with over the years. “Especially the kids. I obtained so much insight from them. Insight into their courage, into what made them laugh, what made them cry, what made them keep going.”

Roger Canaff is a widely known child protection and anti-violence against women advocate, legal expert, author, and public speaker. He has devoted his legal career to the eradication of violence against women and children, first as a prosecutor in historic Alexandria, Virginia, then as a Special Victims ADA in the Bronx, and then as deputy chief of the New York State Attorney General’s Office, Sex Offender Management Unit. Most recently, he was employed as a US Army civilian, serving as a highly qualified expert training and advising military prosecutors on sexual assault and other special victims cases. With over 20 years’ experience, he has prosecuted and consulted on cases involving sexual and physical abuse of children and adolescents, sexual assault against adults, and crimes against the elderly and persons with disabilities. Canaff continues to provide training to other attorneys, medical experts, law enforcement officers, victim advocates, and the general public on all issues related to the investigation and prosecution of child abuse and sexual assault. He teaches law, comments on special victims issues for major networks, and is the author of three novels. He lives and works in New York City.