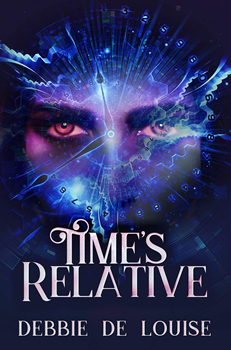 For many, the pandemic allowed time to reflect on life, learn a new skill, or set a binge-watching record one week, only to break it the next. For author Debbie De Louise, it was a chance to travel back in time—about 20 years—to an old manuscript (about time travel, ironically enough). She used the time to update her old friend, and the result was De Louise’s 11th novel, TIME’S RELATIVE.

In this interview with The Big Thrill, De Louise provides insight into the challenges of moving a reader between time periods, and much more.

I’d like to start by asking you a bit about the challenges of writing a cohesive story that weaves together different periods. How do you ground your readers in the moment while also moving them through time?

Because I wrote this book in 1998, it was relatively easy to include the culture and technology of that period. Google was relatively new in 1998, and Wordperfect was the popular word processing program. There were no cell phones, and restaurants still featured smoking sections. Moving back in time was a bit more difficult. I had to research that information to keep it authentic. Also, most of the time travel in the book involved travel to Sam’s past and future, so it was easy to fictionalize that part of the book. When Sam is shown glimpses into the world’s past and future, including 9/11 and COVID-19, it wasn’t difficult to include because I’d lived through it while my character, Sam, hadn’t.

Tell us a bit about Samantha Stewart. What do you like about her? What keeps her human? What surprised you as she further develops across your novel?

Sam’s relationship to her family and her best friend, Angie, play a big role in her character. While her mother is a hypochondriac and her sister is what some might consider a freeloader, Sam loves them just the same. When she foresees danger in her sister’s future, it alarms her, as do some things she learns about her friend’s destiny as well as her own. Sam, besides being a librarian—which makes her naturally inquisitive—also treats her cat like a child. I do the same with my three cats. What surprises me about her is how she, reluctant at first to get involved with the time-travel project, proves to be quite brave and adventurous.

One of the great things about fiction is the opportunity to take the everyday scenarios (like applying for a job) and push the boundaries. What drives Samantha Stewart forward as she learns more about the company and the challenges of the new position?

Before Sam even interviews for the job at Virtual Software, she learns that the company’s president, Jane Oldsfield, is missing and that the vice president is currently running the company. While her instincts warn her that there may be something amiss in the situation, her curiosity and her friend’s encouragement spur her on. Another motivation is her attraction to Greg Parsons, the vice president.

Fiction often serves as a Trojan horse for sneaking real-life issues into readers’ minds. Is there a bigger/deeper theme in TIME’S RELATIVE that you’re hoping your readers will take away after reading it?

Basically, I believe that the past can’t be changed, but the future is being shaped by the many decisions we make and the choices we select each day of our lives.

I would say that Nora Roberts would be one. From her standalones to trilogies to her J. D. Robb futuristic mystery series, I’ve always enjoyed her books. I like the versatility of writing both a series and standalone books, and try to alternate them. Cozy authors who have influenced me include members of the Cat Writers’ Association to which I belong, including Carole Nelson Douglas and her Midnight Louie cat mystery series.

I currently alternate reading a popular author and an indie author. I read mostly mysteries and thrillers, but I also enjoy historical novels and some science fiction. I rarely read pure romance, but I enjoy romantic suspense, and I was a big fan of Phyllis Whitney, Victoria Holt, and other gothic romance authors when I was young. I just finished a new gothic-type book, Her Dark Lies, by J. T. Ellison, and have started the historical cozy Mrs. Peabody’s Party Line: A Honeyspoon Murder Mystery by Marianna Heusler.

What’s one piece of advice that has served you well since you started writing fiction? Is it the same advice you’d give aspiring authors today?

The best advice that I received is to keep writing and enjoy the process even if you don’t become a bestseller right away or sell many books. Writing is time consuming, but it can be fulfilling in itself. Creating stories and characters is a wonderful creative outlet. Most authors would rather spend their time writing than taking care of the business side of the profession, which entails marketing, promotion, etc. Finding the balance between both is the biggest challenge to writers. Not giving up and being persistent is the best advice I would give to aspiring authors today.

Debbie De Louise is an award-winning author and a reference librarian at a public library on Long Island. She is a member of Sisters-in-Crime, International Thriller Writers, the Long Island Authors Group, and the Cat Writers’ Association. Her novels include the five books and four stories of the Cobble Cove cozy mystery series, a comedy novella, When Jack Trumps Ace, a paranormal romance, Cloudy Rainbow, and the standalone mysteries Reason to Die, Sea Scope, and Memory Makers. Debbie has also written a non-fiction cat book: Pet Posts: The Cat Chats. Her time-travel novel, TIME’S RELATIVE, is her latest novel. She lives on Long Island with her husband, daughter, and three cats.

Debbie’s stories and poetry also appear in the Red Penguin Collection anthologies, What Lies Beyond, ‘Tis the Season, Stand Out: The Best of the Red Penguin Collection, Volume 1, and A Heart Full of Love. She has also been published in Red Penguin’s Bloom Literary Magazine. Her poems are also featured in the Nassau County Voices In Verse 2020 anthology and the 2020 Bards Annual. Debbie also writes pet articles for Catster Magazine.