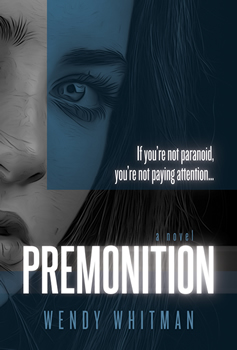 In Wendy Whitman’s PREMONITION, Cary Mackin is a TV journalist who has covered crime for nearly 20 years. After losing her job, she moves to a small town in Connecticut—only to get caught up in the web of a deranged serial killer. Cary has a dark secret that drives everything she does: a lifelong fear that one day she’ll be murdered. As the madman continues to terrorize the beautiful countryside where she now resides, will Cary’s premonition come true?

Author Wendy Whitman spent a few decades as a true crime journalist. I asked her what makes PREMONITION stand out in a subgenre that’s been popular for so many years.

“I think one of the things that makes it unique,” Whitman says, “is the combination of fiction with true crime cases. Originally when I set out to write a book, I thought I would do nonfiction and then I figured out how I could include real cases in a fiction book. I wanted to give the reader the sense of what it’s like to constantly be exposed to the dark side of human nature and the impact that would have on someone.

“In terms of the fascination with true crime, I think people are drawn to these stories—factual or fictitious—because they reveal a side of humanity that’s hard to explain. I think most people find killers like Dennis Rader, a.k.a. BTK, and Joseph DeAngelo, the Golden State Killer—both of whom managed to lead normal lives, even fooling their families, while intermittently committing murders—incredibly intriguing. Murder, gruesome cases, and the killers behind them are a source of endless fascination because no normal person can imagine being that cruel to another human being.”

So what does Whitman think about the way the media covers sensational crimes?

“High-profile cases such as O. J. Simpson, Casey Anthony, and Scott Peterson tend to blow up in the media,” she says. “Unfortunately, they turn murder into a form of entertainment and alleged murderers into celebrities, with the victims often getting lost in the shuffle. There’s a fine line between informing the public about a murder case and elevating the killer to celebrity status. Some people have advocated that the names of accused killers should be kept secret so that they don’t become famous. Many believe some killers use their crimes to seek attention and notoriety and that the media should deny them their fifteen minutes of fame. It’s a complicated issue.”

As a former producer of true crime television, what went into the choices about which stories to tell?

“In general,” she says, “we steered away from murders that were just too grisly or too sexual in nature. These included cases where the victim’s remains were literally made into soup. There was a case where a man murdered his partner and then barbecued her remains until someone in the neighborhood called the police and reported a foul smell. Most cases involving a well-known person accused of murder made the cut. I tried to choose cases that were particularly heartbreaking in terms of what the victim or victims went through, such as the Tennessee case of Channon Christian and her boyfriend Christopher Newsom, as well as the Carr brothers’ murder spree in Wichita. I feel it is our responsibility to educate the public on how the legal system works and make sure the victims aren’t forgotten.”

I wanted to know about her “favorite” unsolved murder.

“The murder of Valerie Percy, former Senator Charles Percy’s daughter, back in 1966, is definitely my ‘favorite’ unsolved murder,” she says. “Like me, Valerie was an identical twin, so I think that was certainly a factor that drew me into the case. And she was murdered in her bed while the rest of the family slept nearby.

“Charles Percy was running for the Senate at the time, and the case blew up in the news. Valerie was stabbed and beaten to death in the family’s mansion in Kenilworth, Illinois. I remember seeing a photograph of Valerie’s twin sister, Sharon, at her funeral. The look on her face haunted me for a very long time.

“In addition to the fact that the family was at home during the murder, there was another factor that caused me to get obsessed with the case. Valerie’s stepmother heard her moans, went to her room, and actually saw the killer. But he shined a flashlight right at her, blinding her, and was able to escape. There was something about knowing that a family member had seen him, been that close to him, and yet the murder was never solved.”

In PREMONITION, we hear quite a bit about Cary’s biggest fear. What’s the author’s?

“Well,” she says, “It won’t come as any surprise Cary and I share the same fear: that we will be murdered. I attribute my personal fear in part to the many murder cases I heard about as a very young child. I used to be afraid to go to bed at night. The first murder case I remember hearing about was a man who kidnapped a five-year-old girl and then killed her. It was all over the news in the New York area at the time and scared me to death. Then there was the case of Kitty Genovese, who was stabbed to death reportedly in front of witnesses who failed to call the police. The facts have changed over time, but Kitty’s murder stuck with me as well. And the worst was the mass murder of the eight Chicago student nurses by Richard Speck back in 1966. At a very early age I learned there are things to fear.”

Before Whitman went to law school and before her career as a true crime journalist, she worked with George Carlin and Lily Tomlin. What was that like?

“Lily and George are two of the smartest people I have ever known,” Whitman says. “I consider it a great privilege that I was fortunate enough to work for both of them. Whenever we went out after her Broadway show, Lily would spend the better part of the night writing notes on everything from a napkin to any scrap of paper she could get her hands on. That stayed with me because as I began writing my book I would often have to pull over if I was driving to jot down a thought I had that I didn’t want to forget. George was actually a very serious and introspective person whom I greatly admired and considered a good friend. He was definitely ahead of his time.

“I decided to go back to law school when I was working for George. It was a very difficult decision but ended up working out well as it led me to Court TV. I tell everyone that I went from comedy to crime, but in the case of both Lily and George they have such intelligent and socially cognizant humor that it wasn’t a very big leap.”

If Whitman put together her dream panel for ThrillerFest—participants need not be living to be invited—who would be on the panel and what would the topic be?

“There are three dream panels I can think of,” she says. “The first panel would be ‘Victims and Their Families: An Intimate Look.’ The panel would be about the toll losing a loved one to murder takes on their family and how a victim’s parents, siblings, close friends, and even attorneys cope with the unthinkable. The panel would include Sharon Tate’s mother Doris and her sisters Patricia and Debra; murder victim Channon Christian’s father Gary Christian; H. G., who survived the Carr brothers’ massacre in Wichita, Kansas in 2000, which took the lives of four of her closest friends, including her fiancé; Danny Rolling’s last murder victim, Tracy Paules’s sister Laurie Lahey; and Carr brothers prosecutors Nola Foulston and Kim Parker, who literally sobbed throughout survivor H. G.’s impact statement in court.

“A second panel would be ‘Families of Killers: Where Were the Signs?’ Panelists would include Dennis Rader’s daughter Kerri Rawson and Rader’s wife Paula Dietz; Joseph DeAngelo’s wife, Sharon Marie Huddle; and Gary Ridgway’s son, Matthew.

“Lastly, a panel about ‘What It’s Like to be Murdered’ with victims Tracy Paules, Channon Christian, and Meredith Emerson. I included this as an obviously impossible idea only because much of my novel is about Cary’s thoughts on what it feels like to be murdered.”

Wendy Whitman has a unique background through her decades-long work as an executive and producer for Court TV and HLN, covering almost every major high-profile murder case in America. Through her knowledge of the most detailed aspects of the crimes, Ms. Whitman has become an expert on the subject of murder in America. Before attending Boston University School of Law, Whitman worked for comedians Lily Tomlin and George Carlin. After graduating from law school, the author embarked on what turned out to be a twenty-year career in television covering crime. She spent fifteen years at Court TV and another several at HLN for the Nancy Grace show, where she appeared on air as a producer/reporter covering high-profile cases. Whitman received three Telly Awards and a GLAAD nomination during her tenure at Court TV.