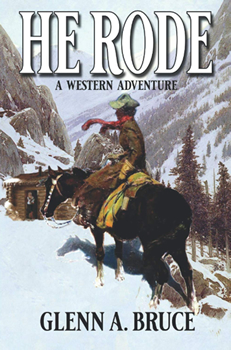 Lawrence Jefferson Taylor, a Wild West “fixer” known in west Colorado and northern New Mexico only as Honcho, has a past he is sure will catch up to him one day. In the meantime, to atone for his “sins,” Honcho helps those in need, but only when the stakes are highest—clearing out a saloon full of immoral gunslingers, transporting an Indian-murdering giant known as “The Monster,” or rescuing the lovely Ingrid from cattle rustlers who have enslaved her. When Ingrid and Honcho make a life together, his past does return to cause trouble. But in the end, it may be Ingrid’s dark past that will tax Honcho beyond his abilities to save himself.

Set in the Colorado and New Mexico high country of 1865-1880, HE RODE is a wild, edge-of-your-saddle ride with an honest loner seeking to rid the territory of its worst bad men. Lawrence Jefferson Taylor’s exploits define danger, if occasionally with comical results, as he seeks to right wrongs, help the people who need it most, and make outlaws regret ever hearing the name “Honcho.”

The Big Thrill caught up to author Glenn A. Bruce to learn more about his latest historical thriller, HE RODE:

Both challenge and opportunity are the same. It started out as a short story. I then wrote it as a screenplay, then finally as a 46K-word novel. The process took a while, but it turned out better than expected. (Well, I always had faith in the story!)

A good ripping yarn of a Western thriller that is different than any of the standard fare.

What makes HE RODE different from other Westerns?

The character is a sort of 1880s Ray Donovan, but reluctantly, as he is trying to make up for past ill deeds (though he needn’t). The type of violence and resolution, the thriller aspect, the love story and humor, are all atypical of the genre, making it a kind of modern take on the style.

That I could write a Western, and that I could turn a short story into a screenplay and a novel.

Yes. I wanted it to read more like a thriller than a conventional Western. I also wanted an offbeat love story born of violent coincidence. I also wanted a fair amount of (dark) humor, not necessarily common to the genre (but common to me!).

Steinbeck, Vonnegut, Joseph Heller, and Elmore Leonard. I also admire Carl Hiaasen and James Hall, for (in order, their): humanity and humor, quirkiness and humor, politics and humor, easygoing humor and quirky characters, sense of place.

Longtime WGA and ITW member Glenn A. Bruce holds an MFA from Lindenwood University, where he was associate editor for the Lindenwood Review and received an “Outstanding Alumnus” award in 2014. He has had over 50 short stories, essays, and poems published in the US, Britain, Canada, Australia, and India, and has won awards for writing, screenwriting, and directing. He recently signed contracts to have two of his novels published: the western HE RODE in December 2020 (with a contract for 1-4 more over two years), and thriller Last Blast in early 2021. Glenn began his career in Hollywood where he wrote the hit movie Kickboxer, episodes of Walker: Texas Ranger, Baywatch, the original G.L.O.W. Show, and sketches for Cinemax’s Assaulted Nuts. Glenn currently lives in Florida.