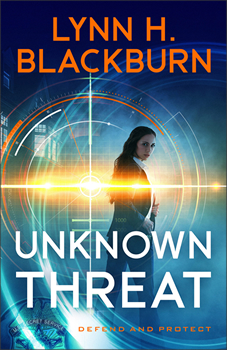 Upon completing her popular Dive Team Investigations series, Blackburn has created a new team centered around the Secret Service. The first book in that new romantic suspense series is UNKNOWN THREAT.

After four US Secret Service Special Agents die in unusual circumstances within a ten-week span, FBI Special Agent Faith Malone is put in charge of the investigation. But she’ll have to work alongside USSS Agent Luke Powell to bring a killer to justice—before his name joins his friends’ on the list.

In this exclusive interview, Blackburn spends some time with The Big Thrill talking about the inspiration for the series and its first installment.

What’s the story behind the story for UNKNOWN THREAT?

I’m never completely sure where a story idea comes from. It’s impossible for me to pin it down because it’s made up of so many different experiences and random thoughts that somehow meld into a cohesive plot. In the case of UNKNOWN THREAT, I knew I wanted to focus on the US Secret Service, and I had a solid visual image of the first scene, but that was about it. When my research led me to the understanding that the FBI would be the ones to investigate an attack on the Secret Service, I knew I wanted my heroine to be the FBI agent assigned to the case. Then I followed the story where it led me.

Your previous books explore intense subject areas. What kind of research did you have to do with the Secret Service’s procedures? Into serial killers, or more specifically, those who target law enforcement?

While I do a lot of research online, especially these days, I’m also a big fan of reading biographies, true crime, and any nonfiction that I think might give me insight into the minds of my characters. I also had the privilege of interviewing a former Secret Service agent while I was developing the series and then again when I had specific questions related to the plot.

Your Dive Team series was set in North Carolina. Will this new series also have a strong regional tie?

Oh, yes. The Dive Team characters know the Secret Service agents, and there are some cameo appearances that I think readers will enjoy.

Which comes first—the setting or the story idea? How does your setting influence the story?

The story idea, with the general understanding that the story will be set in the South. The specific location for this series was based on the actual location of a Secret Service Resident Office. The resident offices are smaller than the field offices, and there are two in North Carolina. I knew I wanted to bring the Dive Team Investigations characters back, so I needed them to be nearby.

Your tag line is “where fear and faith collide.” How do you see your faith as part of your stories?

I don’t write my stories with a specific faith focus, but because my own faith is central in my life, it’s natural for it to also be part of my characters’ experiences. Traumatic and intense circumstances have a unique and painful way of either breaking or strengthening our faith. In my own experience, my faith has grown most when I’ve been faced with challenges that I didn’t think I could survive. The struggle was intense and not something I’d ever want to go through again, but on the other side of it was a deeper faith. That’s what happens when my characters go through extreme circumstances and come out on the other side. I’m not writing stories where someone prays, and everything magically is fixed. God isn’t a genie, and prayer doesn’t work that way. But faith can give us the courage to process what’s happened and move forward in forgiveness and hope. That’s what I want readers to experience along with my characters.

Romantic suspense is often rather steamy. Do you think your inspirational approach has hurt you in this genre or has it helped your books stand out?

There are many readers who are thrilled to find stories that have the suspense they crave with a romance that doesn’t involve the steamier elements that are common in the genre. My books are exactly what they are looking for, and I’m happy to fill that place in the market.

There are two more books coming in the Defend and Protect series as well as a few other projects on the horizon. I’ll be busy for a while!