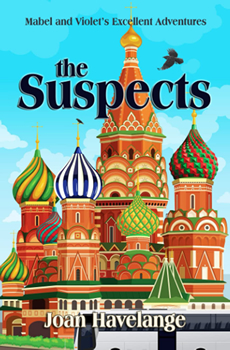 Canadian author Joan Havelange has translated her love of travel into a fun series populated by middle-aged protagonists.

THE SUSPECTS, the fourth book in the Mabel and Violet’s Excellent Adventures series, finds the duo on a European tour which ends in disaster in Moscow. The murder of their tour director offers multiple suspects among the tour participants, as well as local shady characters. The Russian police, however, are focused on Mabel as their prime suspect. Mabel and Violet must use all their skills and ingenuity to solve the murder in Moscow and prove Mabel’s innocence.

In this exclusive interview with The Big Thrill, Havelange shares insight into the decisions she made in crafting this installment of her adventure series.

Your protagonists are middle aged. We’re seeing more of this trend to feature mature protagonists in current novels. Do you think this reflects the demographics of authors and/or readers—or is a different force at work?

You’ve compared writing to directing theatre, with the characters showing up on time, knowing their lines. Can you expand on that? Do you see the author as a creative force or a stage manager?

No, not a stage manager, more of a director. As a director you have a vision of what you want your actors to portray on stage. As a writer you have the vision and the power to direct your characters to tell your story. 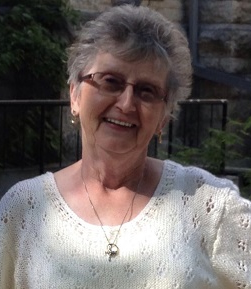 I discovered you’re an avid golfer and the “what if” of an errant shot led to Wayward Shot. What’s the story behind the story for THE SUSPECTS?

In Wayward Shot, the idea came when I was golfing with my son. He had a great long drive over a hill. I complimented him on his drive. His reply was, “I hope we don’t find someone with the imprint logo of Titleist in the middle of their forehead.” (We didn’t.) In Wayward Shot, my protagonists do find a golf ball in the middle of a dead man’s forehead. And the mystery begins.

THE SUSPECTS: I have traveled to many countries including Russia where the murder takes place. And during my travels I have met many people. I lumped many personalities I have met into the suspects who may or may not have killed the tour guide.

Mabel and Violet’s Excellent Adventures covers a series of well…adventures. What kind of story bible do you maintain for the pair as you move from book to book?

I have a story bible as you said. I have a list of the characters who appear in each of my books. Their appearance and their personalities. You never know when you might need one of them to pop up in the next book. For instance, in my second mystery, Death and Denial, which of course took place in Egypt. A character from that book appears in The Trouble with Funerals, a mystery that takes place in their hometown of Glenhaven. My plan is to take my ladies away to a country I have visited, then back to their little prairie town.

You came to writing later in life (as many authors do) which allowed you to draw on your career and life experiences. How did/do you feel about learning the craft of writing? Are you a pantster or a plotter? Any favorite craft books or instructors?

I’m a plotter, with a touch of pantser thrown in. If I have a writer’s block it’s because I’m taking my story or my characters in the wrong direction.

I’m an avid reader, not only do I enjoy the books I read, I learn from them. I did read Save the Cat, which is a how to write a Hollywood script. It helped, but I don’t follow the formula to the letter.

What’s it like working with the Canadian publisher, Books We Love?

I love my publisher—good editors, great covers. And they do a lot to promote my books. It’s a small publishing house. So you get a lot of attention. And emails are always answered on the same day. That’s rare, I think.

What’s next for Mabel and Violet?

The next mystery for Mabel and Violet will be Murder Exit Stage Right. I have years of directing to draw on. I have already written the outline and a few chapters. And I have another book hanging in the wings.

And on a separate note, how to you manage the winters in Manitoba, much less the years you spent with the mining company?

I have moved to southern Manitoba. The summers are longer, and the winters are shorter. But they are still darn cold. When I lived in Northern Manitoba, it would get dark around four or five in the winter. But in the summer, it would just get dusk, then light. So we had long summer days. And because we were so isolated, the community was like a big family. And although I have been gone from Lynn Lake for many, many years, I am in touch with a lot of ex-Lynn Lakers. As I said, family.

Joan Havelange, avid golfer and world traveler, is the author of Wayward Shot, Death and Denial, and The Trouble with Funerals.