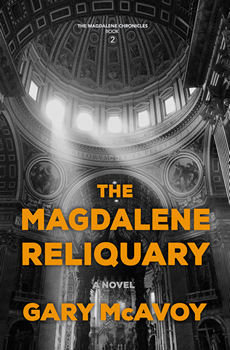 THE MAGDALENE RELIQUARY provides a seamless transition from The Magdalene Deception, using characters and setting elements from McAvoy’s fiction debut.

During Father Michael Dominic’s routine work in the Vatican Secret Archives, he discovers a mystifying 13th-century puzzle constructed for the legendary Cathars by famed Italian cartographer Pietro Vesconte. When the puzzle is solved by investigative journalist Hana Sinclair, the conundrum reveals a cryptic map—one that leads to an obscure cave in the fabled Languedoc region of France—where Dominic and his friends unearth a sacred reliquary of astonishing importance and considerable threat to the Church. Fending off attacks by feared Ustasha agents and a powerful Russian oligarch bent on acquiring the object for his vast private collection, Dominic joins forces with Roma gypsies and the Italian Art Squad to ensure the artifact doesn’t reach the lucrative black market in antiquities.

In this interview with The Big Thrill, we catch up with McAvoy to discuss his fascinating new novel.

You’ve followed an interesting, wide-ranging path through life. What led you to write novels?

I wrote my first story when I was 10 years old, and ever since have wanted to be a writer. As a lifelong entrepreneur, though, I had to earn a living, and my business interests kept me fully occupied for decades, until I exited a software company I founded and finally had time to write. After co-authoring the nonfiction work Harvest for Hope with Dr. Jane Goodall, I decided I’d try my hand at fiction with a story involving the Vatican Secret Archives, one I’d been piecing together for years. That book became The Magdalene Deception, which is being received well enough that I chose to keep it going in a series. I grew up reading Robert Ludlum and Stephen King and so many many others, and love being drawn into a book so strongly that nothing else exists outside the pages. That’s what draws me to writing novels.

When I read the synopsis of THE MAGDALENE RELIQUARY, my mind immediately mashed The Davinci Code with Raiders of the Lost Ark. In the segment of the writing world where those blockbusters are cultural touchstones, how do you create something new?

There’s ample opportunity for writing any number of different plots and characters using common themes and exotic locations. I’m not the first to write religious/historical thrillers (nor was Dan Brown…), but there’s a huge readership out there for good stories with believable characters doing things we all want to know more about—especially now during these trying times, escaping real life in books is a magnet for readers around the world.

How much research did you have to do to uncover all these fascinating bits of history?

I spend a great deal of time researching locations, many of which I’ve traveled to, to get the feel, the smell, the intimacy of place that comes through in the writing. Italy is by far my favorite country, and I speak the language conversationally, so in a way it’s become second nature to me. Learning so much about other places and cultures makes me want to travel there as well, but there are so many resources available to capture those “bits of history” that, given time and focus, can give readers the same education I’m getting about important historical people and events.

“My main character is a young Jesuit priest whose faith is more provisional than dogmatic, more academic than devotional.” Can you expand on that?

Father Michael Dominic is devoted to his personal passions involving religious history and ancient biblical documents. With an unconventional upbringing—no father present, a single mother who worked and lived in the rectory, a priest as a father figure, the church all around him—every influence Dominic had urged him to join the priesthood. But he’s still trying to find his personal calling. I’ve known a few priests who have claimed similar perspectives. For many the priesthood offers a place of solace, of learning to better know yourself while helping others, without the trials and complications of the secular world. There are those who never have had “the calling,” and yet find lives of value and significance in whatever duties they take up in service to the greater good. In Dominic’s case, he has yet to find that deep devotional attraction, and has issues with the way the Church handles things. This conflict has an impact on every decision he makes, often getting him into trouble. Whether he stays the course is yet to be seen.

You mentioned your books arise from a personal collection of ancient manuscripts and historical documents. How did you become interested in this?

In the 1980s I had a mentor in historical memorabilia, a man who taught me the value of learning the lessons of history by actually holding it in your hands—in the form of letters by Einstein, Hemingway, John F. Kennedy, and more—and from then on I was hooked. Some 20 years ago I began an online business dealing in historical manuscripts and similar artifacts, and the excitement of, for example, holding Richard Nixon’s actual letter of resignation from the presidency, can’t be underestimated. Like Michael Dominic, that’s my personal passion.

I’m concluding the Magdalene Chronicles series with Book 3, The Magdalene Veil, then starting a new series also featuring the same characters, just with another series name. There are countless adventures yet for them to experience…

And on a personal note, how cool that you collaborated with Jane Goodall.

Yeah, Jane and I have been close friends since 1999, when I was her media escort for her book tour in Seattle. I’ve raised over $2 million for her institute in that time, relying on my software industry network here. She’s quite a remarkable woman, and we’ve had the most amazing times, as you can imagine.

Gary McAvoy is a veteran technology executive, lifelong entrepreneur, and author of several books including his latest novel, THE MAGDALENE RELIQUARY, his fiction debut novel The Magdalene Deception, and his nonfiction work And Every Word Is True, a sequel to Truman Capote’s landmark book In Cold Blood. Gary is also a professional collector of ancient manuscripts and historical documents, much of which informs his writing projects.